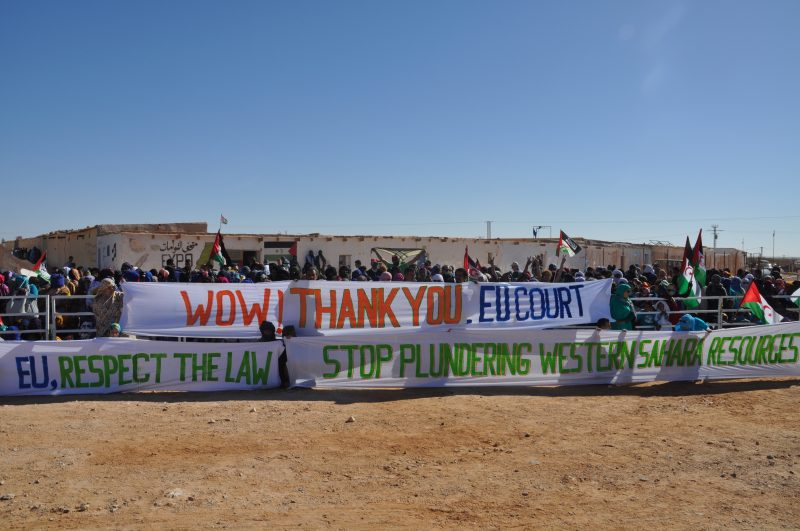 A manifestation of support for the ECJ court ruling in Smara refugee camp, February 27.
Photo credit: Saharawi Campaign Against the Plunder (SCAP)

February 27th was the 42nd anniversary of the Western Saharan declaration of independence from Spain. Although, as of now, there is no independence to celebrate for most of the territory that remains under Moroccan occupation, a little triumph could be felt throughout the Sahrawi refugee camps in Algeria, where a majority of the population resides.

The very same morning a court ruling from the European Union Court of Justice (ECJ) was issued in favor of decolonization. To be more precise, the ruling concerns an agreement between the European Union and the Kingdom of Morocco regulating the European fishing industry’s access to Moroccan waters.

This so-called Fisheries Partnership Agreement has been in place since 2006 and will expire in July 2018, while a process of renewal is underway. The ruling from the ECJ clearly states that any such agreement with Morocco could not include the waters off Western Sahara, over which Morocco claims sovereignty.

The statement was anticipated, consistent as it was with previous rulings and hardly controversial from an international legal standpoint. Still, it is but the last development in a conflict that is brewing between various branches of EU governance over the union’s trade with Morocco. The controversy being, of course, Morocco’s occupation of Western Sahara that is listed by the UN as a ‘non-self governing territory’.

This currently concerns two separate negotiations that the EU commission and Morocco will be having throughout the spring of 2018: The Fisheries Partnership Agreement that allows European vessels to fish in Moroccan waters and a trade agreement concerning agricultural and fishery products. The fisheries agreement will expire in July and the trade agreement in April.

Although the ECJ clearly ruled back in 2016 to invalidate any bilateral agreement with Morocco if it concerns the occupied territories, the EU trade commission seems insistent on renewing the deals anyway as they concluded a new trade agreement with Morocco in January 2018. This came as a surprise and has caused for condemnations from the Western Saharan government-in-exile, activist groups, as well as from within the EU parliament.

Last week a number of EU parliamentarians addressed their colleagues in a statement expressing that they:

…feel alarmed about the way that the Commission is managing the process, the lack of transparency and possibilities for scrutiny for members of the European Parliament, and the Commission’s attempts to circumvent the ECJ ruling from December 2016.

One of the signatories is Jytte Guteland, belonging to the social democratic parliamentary group who last year was among a group of European MEPs that was declared persona non grata by Moroccan authorities upon trying to enter Western Sahara.

On the conduct of the trade commission, she expresses concern that goes beyond this particular case. Speaking to Global Voices, Guteland noted that the commission's actions were worrisome.

It has got me very worried the way the commission handled the first court ruling [2016]. They chose to negotiate a new trade agreement that includes Western Sahara in spite of the ruling. In a time when the principle of rule of law is constantly challenged it is a matter of EU's credibility. The EU must live up to its’ own rulings and international law.

The Sahrawi people, do not benefit, economically or otherwise, from the illegal exploitation of their natural resources and trade with the European Union; nor has the Saharawi people’s consent been credibly sought. Any economic gains and development as a result of the exploitation of our natural resources and their illegal trade with the EU, are selectively distributed with the sole intent of further entrenching Morocco’s illegal occupation and systematically discriminating further against the Sahrawi people it occupies.

Being a non-self-governing territory, international law requires that the people of Western Sahara get a say in any economic activity taking place in the territory and that it should come to their benefit. To complicate the matter further, a majority of the population in the occupied territories today consist of Moroccan settlers, while the majority of the Sahrawi people are exiled from Western Sahara, predominately to refugee camps in neighboring Algeria. It is from these camps that the internationally recognized body of Western Sahara, the Polisario Front, operates.

In the same letter of protest, the civil society groups accuse the commission of trying to circumvent the law by means of a subtle shift in terminology.

We also observe with frustration that the Commission replaces the deliberate terminology of ‘Saharawi people’, with ‘population’. These concepts are fundamentally different. Consulting Moroccan organizations, parliamentarians and businesses about Western Sahara can never replace the consent of the Sahrawi people.

In a similar denouncement, the international monitoring network Western Sahara Resource Watch (WSRW) turned down an inquiry of consultation by the commission.

From what we understand, the negotiations with the Government of Morocco are now finished, and the agreed text has been initialed. The Government of Morocco does not represent the people of the territory. It is clear that no consent has been received, as the Court required. We do not see the point of any consultation on a deal that lacks the approval of the people of the territory.

In response to Tuesday’s ruling, the Polisario Front announced that they are ready to carry on negotiations with the EU over access to the waters that are not allowed to be included in the current fishery agreement with Morocco. According to Guteland:

That would be more legally justified since the UN consider Polisario as the representative of Western Sahara. To further establish an agreement with the people the Sahrawi civil society should also be consulted.

As its biggest trading partner, the Moroccan economy is highly dependent on the EU for exports. At the same time, many of the European member states face domestic pressure and strong lobbying from their respective fishing industries to get access to the Western Saharan resources.

As the stock of fish and sea creatures are rapidly being depleted throughout the world’s oceans, the importance of Western Sahara’s territorial waters in the Atlantic is expected to grow. Today, these waters are considered to be the richest in all the African continent, and due to the occupation, places Morocco first among the fish and seafood exporters on the continent. Official numbers suggest that some 70% percent of the total Moroccan catch is landed at ports in Western Sahara while around half of the remaining catch landed goes to Tan-Tan and Agadir in close proximity to the occupied territories. It is estimated that foreign vessels in these waters pick up more than 90% of their catch from Western Saharan waters.

Most of this fish will not end up on your plate directly but is rather the first step in a production chain. In Morocco and elsewhere, fish are being processed into meal or oil which is, in turn, exported as animal fodder for the meat industries and fish farms elsewhere. Similarly, the main sector of Western Saharan economy is the mining of phosphate rock, a resource that Morocco is already the world-leading exporter of. Phosphate is the main component in synthetic fertilizer on which the world’s agricultural industry depends. As such Western Sahara, often referred to as Africa’s last colony, is a very important territory to global food supply.

The trade agreement between EU and Morocco concerning fishery and agricultural products is, in its current shape, an important part of turning the Moroccan occupation of Western Sahara into a profitable one.