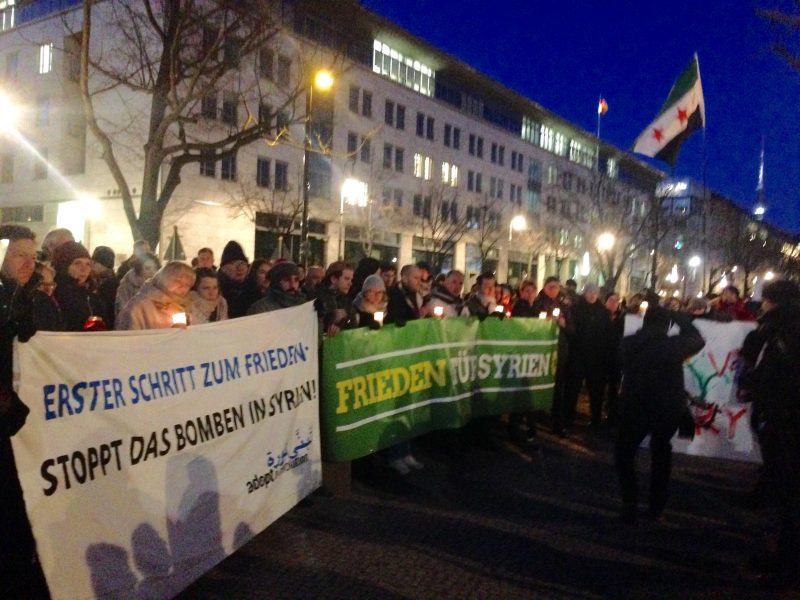 Photo of the rally in Berlin on February 26, 2018. Photo taken by the author.

On February 26, close to 200 people attended an anti-war march and rally in front of the Russian and Turkish embassies in Berlin.

Organized by Adopt A Revolution, a leading grassroots organization initiated by Syrian and German civil society activists in 2011, the protesters demanded an immediate and unconditional end to the bombardment and besiegement of Syria's Eastern Ghouta, Idlib and Afrin by the Assad regime, Russia, Iran and Turkey.

The rally was attended by prominent cultural and political figures from both Syria and Germany such as the chairwoman of the Green Party Annalena Baerbock, Christine Buchholz from The Left Party as well as Syrian writer, journalist and political dissident Yassin Al Haj Saleh.

In their statement, the event organizers wrote:

Syria has become the Ground Zero of international law. None more so than Russia carries the responsibility for the escalation in Ghouta and Afrin. Without Russian approval, the Erdogan regime would not have been able to attack the Syrian-Kurdish region of Afrin. In Eastern Ghouta near Damascus, Russia even actively intervenes in the fighting with its Air Force. According to the independent international NGO “Medecins sans Frontieres” (MSF), more than 15 medical facilities have been destroyed only in the recent days, and bakeries and even schools have been targeted. This is no longer a fight against radical Islamist rebel groups, but a massacre of the civilian population of Eastern Ghouta.

We can no longer accept this inferno in Eastern Ghouta! We cannot remain silent about the murders of Turkey in Afrin!
We, therefore, demand the following:
+ The weapons must be silent! Whether in Ghouta, Idlib or Afrin: + Everywhere in Syria, an instant ceasefire is needed.
+ Humanitarian access in all areas of Syria must be made possible immediately!”

Since February 19, the Assad regime and its allies Russia and Iran have escalated their aerial and ground military offensive against opposition-held Eastern Ghouta. A collection of working-class farming towns just east of Damascus with an estimated population of 400,000, has been under intense siege by the regime since 2013. As of February 28, 582 civilians, a quarter of them children, have been killed in Eastern Ghouta according to the death toll collected by the Syrian Observatory for Human Rights war monitor.

Since January 20, 2018, civilians in Afrin, a district as well as a town in the Aleppo province under the control of the US-backed Kurdish PYD and YPG forces, have also been under a heavy military offensive by the Turkish military and Turkish-backed FSA forces. The area, named after the Afrin river, is inhabited by 172,095 people — 36,562 live in the town of Afrin itself. The Syrian Observatory for Human Rights has called the Turkish offensive “a massacre” while health officials in the Kurdish canton stated on February 26 that close to 200 civilians, many of them children, have been killed since the beginning of the Turkish offensive.

To complicate matters, on February 20, as part of a deal made between the Assad regime and the Kurdish leadership, hundreds of regime fighters entered the Afrin region.

Russia, under Vladimir Putin's expansionist foreign policy, has actively supported and participated in both military campaigns against Eastern Ghouta and Afrin. 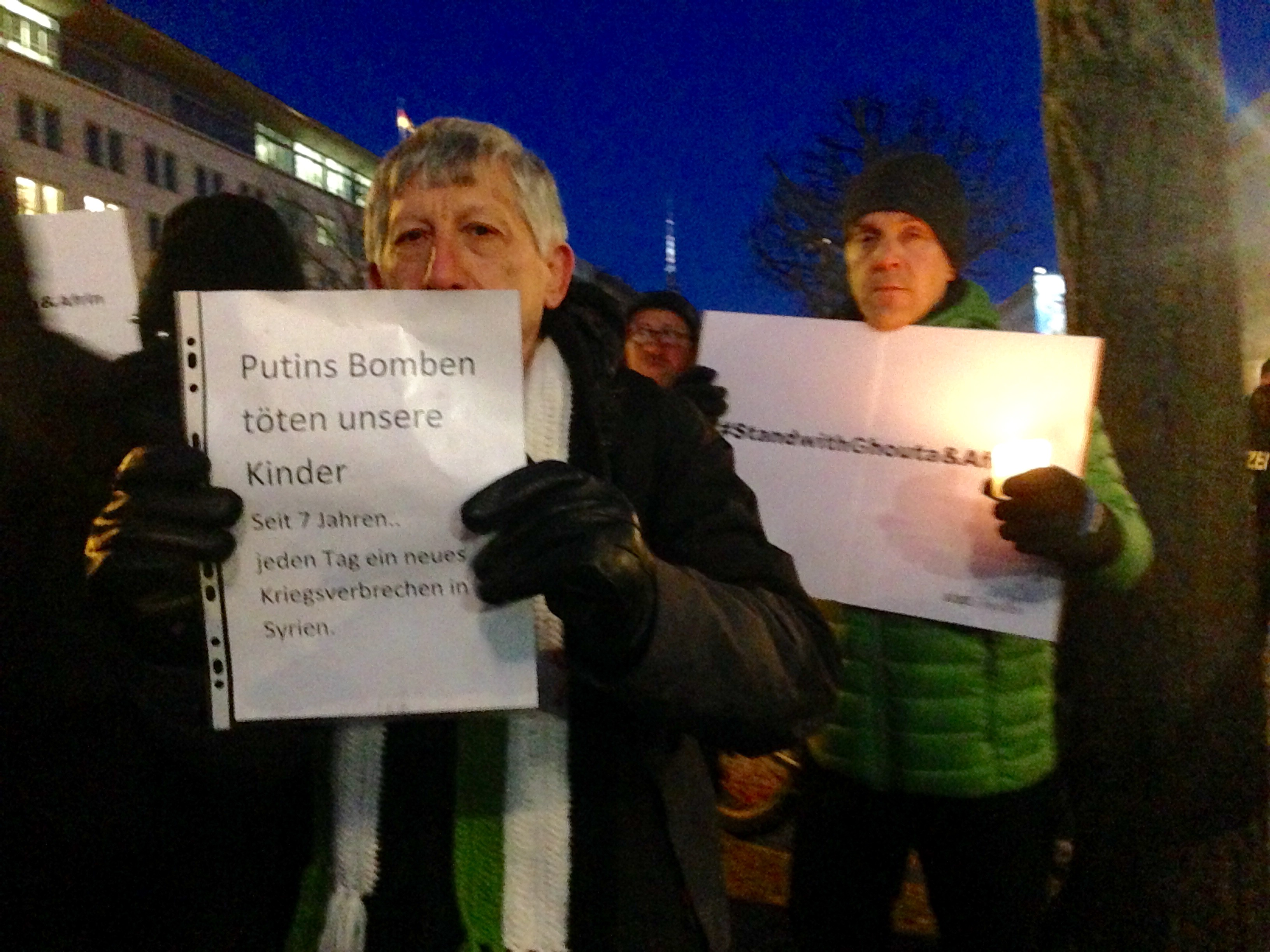 Photo from the protest. Taken by the author.

Speaking with Global Voices, Zakaria Mohammadi, a Syrian-Palestinian from Aleppo, said that he believes that different communities involved in this war have to overcome their disagreements and stand united in order to stop this war. 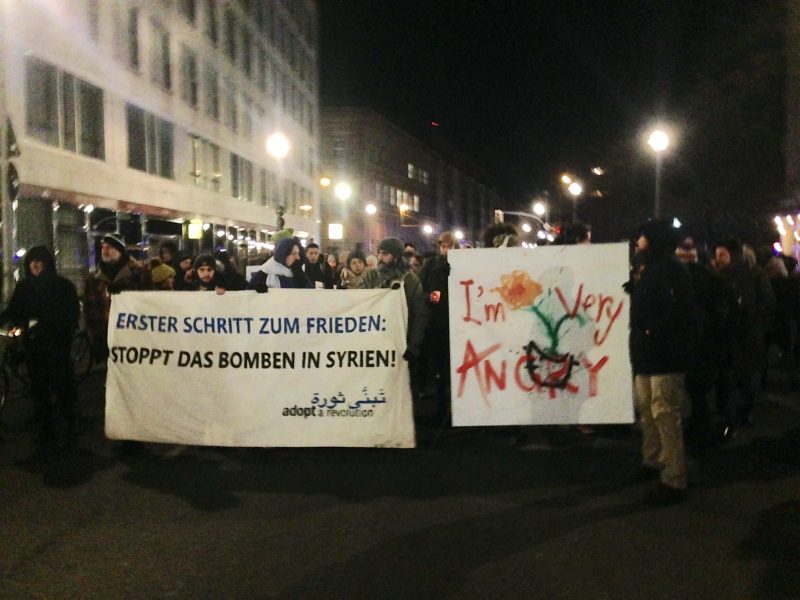 Photo from the protest. Taken by the author.

The rally was perceived as a significant effort towards challenging the military, financial and geopolitical influences by the hegemonic regional powers over the conflict. The fact that Turkey has been one of the only political and military sponsors of the Syrian opposition didn’t prevent anti-Assad Syrian activists to stand in solidarity with the victims of Turkish military aggression towards Kurdish communities in Afrin. At the same time Syrian Kurds joined Syrian Arabs in the condemnation of the brutal military aggression by the Assad regime and its allies against Eastern Ghouta, Idlib and beyond.

As the conflict continues to take a heavy toll on civilian lives from different ethnic, linguistic and religious backgrounds, calls for inter-ethnic solidarity has been expressed by members of both Arab and Kurdish communities inside and outside of Syria. In a highly informative article from 2017, exiled Syrian journalist Loubna Mrie reminds us of the regional power dynamics which have influenced the relationship between the Kurdish and Arab communities since the 2011 social uprising in Syria:

One cannot deny that Arabs and Kurds have both been victims of state repression, and thus, we are natural allies. It is the cynical games of big, powerful countries that have set Arabs against Kurds and vice versa.