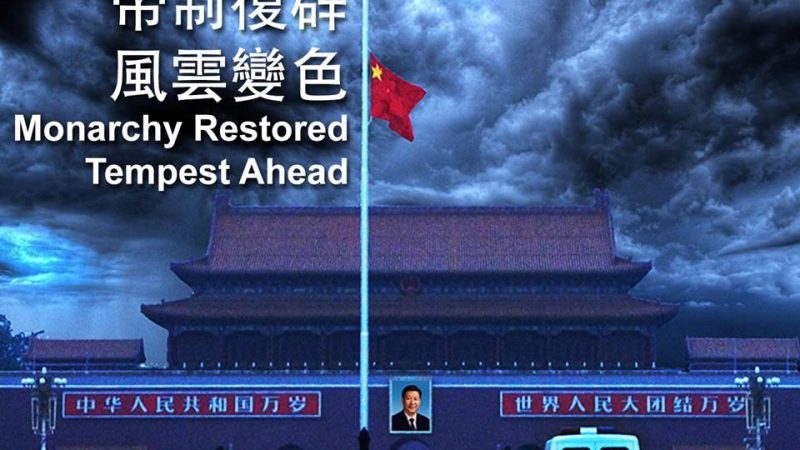 “Monarch Restored. Tempest Ahead.” Derivative photo composed by PH Yang. Use with permission.

The Communist Party of China (CPC) Central Committee proposed on February 25 to remove term limits on the presidency and vice presidency of the People's Republic of China, which would pave the way for Chinese President Xi Jinping to rule indefinitely.

Specifically, the committee suggested deleting a line from the country's constitution that states the president and vice president “shall serve no more than two consecutive terms.”

The two-term presidential limit was put in place by former CPC leader Deng Xiaoping in 1982 to restrain internal power struggles within the party by establishing the collective leadership of the CPC. The decision signified the end of Mao Zedong’s era of individual dictatorship.

But the proposed constitutional amendment would end collective leadership and open the door for power to once again officially rest with an individual, and in this case with President Xi, who is also the CPC’s general secretary and military chief. Xi will finish his second term in 2023.

CPC mouthpiece Global Times described the proposal as a consolidation of the party’s “Power Trinities” and urged people to follow the party. But oppositional voices see the move as an imposition of an absolute monarchy system on top of China's single-party political system.

Public discussion on the constitutional change is censored on mainland Chinese social media. Outside China, a statement co-signed by more than 40 public figures against the amendment was circulated widely online. The statement (via Chinese exiled activist Wang Dan's Facebook) said:

We believe that the amendment is the foundation for the establishment of a tenure system of top leaders. In the future, China may [develop into a political system that has] an emperor without calling it an emperor and a monarchy without calling it a monarchy. The abolition of the two-term limit is another version of [early 20th-century Chinese emperor] Yuan Shikai’s [short-lived] restoration of monarchy and a de facto manifesto of a new monarchy system against the very idea of a republic. This is a historical regression and a denial of 40 years of China’s reform effort. This is about China’s future and we, and all Chinese people, should stand up to express our outright objection to such historical regression since the 1911 Xinhai revolution [which led to the downfall of the Qing dynasty and the end of monarchy in China].

In addition to sharing the statement, Wang Dan also signed it. He commented further on Twitter:

The CPC has officially suggested a constitutional amendment. The country’s presidents will be able to hold their office without limit. Now it is clear that Xi Jinping is set to restore the tenure system of top leaders. His ambition to become a lifetime ruler has been revealed. Xi Jinping is riding backward and forcing China to return to the old path of despotic feudal monarchy. Such an act can only be described with the word “crazy”. But I also believe in dialectics, the extreme will bring about change and he will turn CPC into history.

While some believe that such a “crazy” act will eventually end the “people's democratic dictatorship” under the CPC, others are more pessimistic. Under Wang Dan's Facebook post, one commenter said:

Unfortunately, the majority of Chinese people would support emperor's rule. After the shock, people's attitude would change from “what has gone wrong” to “this is it and we have to accept the reality and carry on”.

There are also some pro-Xi comments on Twitter. This one attempted to rationalize Xi’s decision:

If Xi Jinping just wants to become a lifetime dictator, he does not need to continue in the office of president, he just needs to continue acting as the head of the military committee. That’s why the abolition of the two-term limit is not paving the way for lifetime dictatorship, but to prepare for reform — to buy more time for reform. After that, the constitution can be amended again. This is just a temporary tactic. We can foresee that a thorough political reform will begin soon.

Many Chinese netizens were shocked to see the constitutional amendment proposal as it clearly deviated from Deng Xiaoping's 1982 reform effort. However, search terms related to the online discussion like “Xi Jinping”, “shameless” (不要臉), “long live the emperor” (萬歲萬歲萬萬歲), and “Yuan Shikai” (袁世凱) have been blocked on social media platforms in China.

Under the constitutional amendment proposal, Xi’s thoughts on “socialism with Chinese characteristics for a new era” would also be incorporated into the country’s constitution. Moreover, the to-be-established anti-graft Supervision Commission, together with the administrative, judicial and procuratorial commissions, would be listed as official organs of the state. The Supervision Commission would merge the party's Discipline Inspection Committees with the anti-corruption powers of the procuratorates (responsible for investigation and prosecution) and be the only agency focused on graft. The creation of the Supervision Commission has been interpreted as a strengthening of party control over the government.