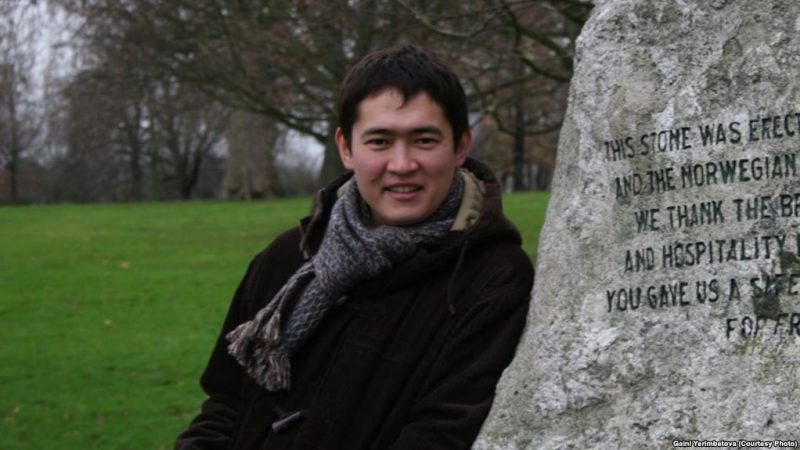 Iskander Yerimbetov runs multiple businesses in Kazakhstan, including a sweet factory and a large helicopter transport company. He is not a major political player in the Central Asian country and yet finds himself accused of laundering money on behalf of Mukhtar Ablyazov, the arch-nemesis of the country's long-reigning President Nursultan Nazarbayev.

Yerimbetov was arrested on November 13, 2017, while leaving a shopping mall with his wife. He has been held ever since.

His mother Gaini Yerimbetova alleges [1] that he has been ill-treated in detention.

(Iskander's mother) Yerimbetova told the Norwegian Helsinki Committee that when she met with her son on January 11, his face was bruised and swollen, and that he had a wound on his forehead, with coagulated blood. She said she also saw bruises on her son’s arms and legs and that he appeared to be in “considerable pain, continuously held one hand to his side and complained about headaches and dizziness.”

This was not the first time Gaini Yerimbetova had reported seeing direct evidence that Iskander had been tortured.

The fresh marks on his skin were “revenge for the fact that we publicly spoke about the torture and a warning that it was going to be worse!” Yerimbetova claimed.

Human Rights Watch and the Norwegian Helsinki Committee have demanded [2] a fair and impartial investigation.

The Yerimbetov family says that Iskander has no personal connection to Mukhtar Ablyazov, a fugitive banker based in France, who has admitted to financing opposition political activities in Kazakhstan and has been accused of massive fraud.

Instead, the family says, Kazakh authorities are using Iskander's detention to try to put pressure on his sister, Bota Jardemalie. Jardemalie is a lawyer who has worked with and represented Ablyazov for a number of years. Authorities want her to return to Kazakhstan and testify as they continue to build a case against the banker.

My brother has been taken hostage as a reprisal against me for my legal work in support of political victims of the regime, including Ablyazov. I too have faced false accusations from Kazakhstan, leading Belgium to grant me political asylum. Officials have promised my brother that they would drop the charges against him if he persuades me to go back to Kazakhstan to provide false testimony against Ablyazov.

Trump is not believed to have raised human rights at the meeting.

Mukhtar Ablyazov is a controversial figure in Kazakhstan. By the time he was accused of escaping from the country with up to $6 billion in funds embezzled from a leading bank in 2009, he had already served time in a Kazakh jail on abuse of office charges relating to his period as the country's energy minister from 1998 to 1999.

Nowadays, he regularly reaches hundreds of thousands of Kazakhs with vociferous criticism of Nazarbayev on Facebook and YouTube. The government has periodically resorted to blocking [4] social media to counter the Ablyazov scourge.

Ablyazov has refugee status in France, where the country's highest court ruled against extraditing him from French territory [5] in late 2016 on the grounds that the case against him was politically motivated.

Trying to save face

As noted in a recent Human Rights Watch blog post [1] on Yerimbetov's case, Kazakhstan is a signatory to the Convention Against Torture. It is also very conscious of its international standing. In the lead up to Nazarbayev's visit to Washington, several articles burnishing the government's image [6] appeared on Western news websites [7], likely the products of a relentless PR drive [8] directed by the country's foreign ministry.

This makes the fact that authorities initially did so little to disguise Yerimbetov's condition all the more concerning.

On one of her visits to see him in jail, Yerimbetov's lawyer described [9] his wellbeing as follows:

He was sick, looked pale and very depressed and seemed to be scared. He passed out from time to time, couldn't speak and cried. He asked for some water. It was clear that he was hungry.

According to Jardemalie's post [10] on Facebook, Yerimbetov was recently introduced to two “foreign forensic experts from Britain” who wanted to examine his body, almost a month after his family cited clear indications of torture.

The fear is that these “foreign forensic experts” are being deployed to reinforce the statements from Kazakhstan's anti-corruption agency [11] asserting that Yerimbetov is in good health.

Despite the fact that Kazakhstan's government is known to closely monitor online discussion linked to Mukhtar Ablyazov, the local social media reaction to Yerimbetov's case has been broad and indignant.

Kazakhstan's mainstream media, however, has toed the government line. When Iskander's relatives began to speak out about his situation, Kazakh news outlets and TV channels largely remained silent, or concentrated [12] instead on his “luxury lifestyle.”

The website afterwards reported confidently that his mother's claims of ill-treatment have “no grounds in reality”, although it is is not clear to what extent Nur.kz's journalists have any qualifications to draw this conclusion.

One thing I know exactly – if I come back to Kazakhstan, Iskander will not be released and I will be arrested and tortured too. They will put both of us in jail, take away all of our our businesses and break up our family.