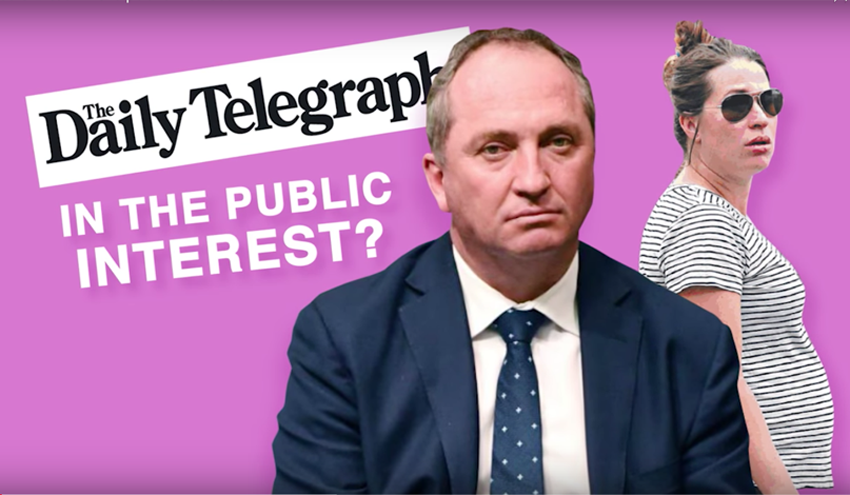 In the public interest? Image: Screenshot Mediawatch video from YouTube.

Colourful, unconventional and controversial Australian politician Barnaby Joyce has announced his resignation as leader of the National Party and Deputy Prime Minister of Australia effective on Monday, 26 February 2018. This follows a series of crises over recent months. The saga of both private and political scandal has dominated both mainstream and social media.

In October 2017 the High Court ruled that his dual citizenship from Australia and New Zealand made his election to the House of Representatives in 2016 invalid. Nevertheless, he achieved a resounding victory in the subsequent by-election for his seat of New England and returned to his role as deputy PM.

Joyce has had a reputation as a larrikin [maverick] and self-promoter. Arts and science journalist Penny Durham was bemused by his newly-found modesty:

Why do people say humbled when they mean the exact opposite?

The wheels on Barnaby ‘s bandwagon started to wobble when it was revealed in the mainstream media that he was living with a former member of his staff and they were expecting a child.

One of Rupert Murdoch’s newspapers, Sydney’s Daily Telegraph, claimed to have broken the story (although Online True Crime News Weekly is thought to have beaten them to the punch). The editor Christopher Dore posted their front page on Twitter:

There was considerable questioning by journalists and the general public about the ethics of revealing the private lives of parliamentarians. The ABC’s Mediawatch program asked whether it was a legitimate story in the public interest. One tweet had no doubt:

@farrm51 you should be ashamed of yourself! “The girl” @Barnaby_Joyce had an affair with is a woman! Shame on you for airing a private matter in public – no consideration for wife & family! Shame on you!

Joyce is a conservative politician who represents a rural electorate. He has campaigned strongly about the importance of traditional values, especially traditional marriage, and against the dangers of promiscuity. He opposed same-sex marriage during the contentious postal survey last year so it was not surprising that many of its supporters saw this as gross hypocrisy. At the time, he told parliament that his marriage had broken down but did not mention his new partner.

Online True Crime News Weekly had in fact broken the story of the affair without revealing details in “MARRIAGE HYPOCRITE! Deputy PM Barnaby Joyce cheats on wife with long sexual affair with staffer while lecturing public on gays ruining marriage.”

One of the few times it’s acceptable to talk about the private life of a politician is when their private actions fail to live up to their public statements — when a politician’s hypocrisy is so clear and egregious that it can no longer be ignored.

Under that logic, the time to discuss Barnaby Joyce’s affair passed long ago.

There were assertions that the journalists in the Canberra press gallery were protecting Joyce during the by-election. At online journal ‘Independent Australia’, Ross Jones, who had also revealed the story in October, thought there had been a deliberate “shroud of silence”.

Following the outing by the Daily Telegraph, accusations of misuse of political power blew up, especially on social media. Firstly, it emerged that two of his National party colleagues, a government minister and the chief whip, had employed the staffer after she left Joyce’s office. In addition, the couple had been living rent-free for 6 months courtesy of a business “mate” of Joyce’s. There were also claims of misuse of travel allowances.

@Barnaby_Joyce has to go, not for his private life. But for the creating of jobs on public money for his GF. It's a rort and he should pay the price!

The prospect of Joyce acting as PM while Malcolm Turnbull was Donald Trump’s guest in Washington seemed to bring matters to a political head. Turnbull gave his deputy a public dressing-down saying he “appalled all of us” and should “consider his own position”. Joyce fired back calling the PM “inept”.

Turnbull also announced a change to ministerial guidelines, prohibiting sexual relations between ministers and their staffers. Social media reveled in what became known as the #bonkban. Many saw the new rule as a distraction from the issue of political integrity:

How Pathetic is @BarnabyJoyceLNP The victim card played again…It's not about the #BonkBan it's the rorting the lies the greed.. the need for a #RortBan You're not fooling anyone.!!

A host of hashtags has competed for social media attention. #Barnabygate was joined by #Beetrooter, a reference to both his ruddy, red complexion and ‘root’ [the Aussie slang for sexual intercourse].

@Barnaby_Joyce says it’s time to move on and stop discussing his affair. Conveniently forgets it’s the fraudulent use of taxpayer funds to facilitate his affair is the real point. The only party that needs to move on is the #Beetrooter – move on from Deputy PM and out of office

#Barnabye throws in the towel

An accusation against Joyce by a prominent Western Australian woman of sexual harassment was the last straw. Though denying the claim, Joyce chose to resign his leadership of the National Party, a position that brings the deputy prime-ministership. This brought the inevitable hashtag #Barnabye:

The new Nationals leader and deputy PM is low profile Veterans Affairs minister Michael McCormack who is regarded as a safe choice. However, he is already copping criticism for his past when, as a journalist, he attacked homosexuality as “sordid”. He has since disowned his 1993 homophobic remarks. However, it didn’t stop social media user Kiera from letting fly on Twitter:

WARNING: This is the homophobe who wants to replace @Barnaby_Joyce as Deputy PM: Michael McCormack. #BarnabyGate #AusPol pic.twitter.com/y5CwwaXRHg

However, given his past tenacity, some are speculating about whether this is the end of Barnaby Joyce’s political career:

Don’t think we’ve seen the last of @Barnaby_Joyce. Likely to be just in a “dust settling holding pattern”