The most famous version of the logo of Mosfilm, the most influential film studio in the former Union of Soviet Socialist Republics (USSR) which produced three Academy Award winners.

In 2011, Mosfilm, the biggest production company in USSR, which continues to dominate the industry in independent Russia, opened ‘a treasure trove of Soviet films’ by uploading a collection of dozens of classics on YouTube for anyone to watch for free. (Ed. note: Some of the contents uploaded to YouTube might not be available in all countries in the world due to its internal policies.)

While the interface of the Mosfilm archive is in Russian only, most of these films have been published with English subtitles, and over the years subtitles in other languages such as Spanish, Turkish or Serbian has been added to some of them.

Among these classics are many of the 24 Soviet Oscar submissions, including quite a few of the nominees. Global Voices presents all three Soviet Academy Award winners for your viewing pleasure (especially recommended for a weekend viewing).

1968: War and Peace by Sergei Bondarchuk 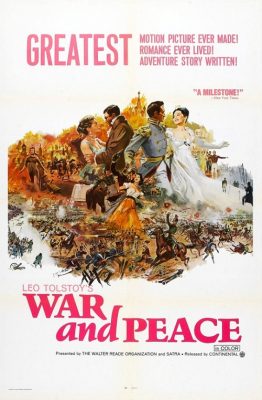 One of the many scanned posters that advertised War and Peace at the time of its release in the USA, available on IMDB. Fair use.

The epic war drama War and Peace (Russian: Война и мир) was written and directed by Sergei Bondarchuk, chronicling the misadventures of five families during the French invasion of Russia, and its impact on the aristocracy. The film, released in four installments throughout 1966 and 1967, had a cast of leading Soviet drama actors of the time, including Bondarchuk as the main male protagonist.

All four installments of War and Peace posted on YouTube can be viewed in full-screen mode:

Warning: Watching this movie can't be considered a replacement for reading the Leo Tolstoy's classic 1869 novel War and Peace, which has been required reading for students in many countries. Alongside the history-based plot, this pivotal work of world literature also provides lengthy philosophical and psychological discussions through life dilemmas faced by memorable characters.

The film is based on the 1923 book by Russian explorer Vladimir Arsenyev, honoring the memory of his native guide, Dersu Uzala (1849–1908). While retelling the life story of the Nanai trapper and hunter, Arsenyev chronicled the exploration of the Sikhote-Alin region of the Russian Far East in the early 20th century, as well as the transformation of Siberia through colonization and economic exploitation. 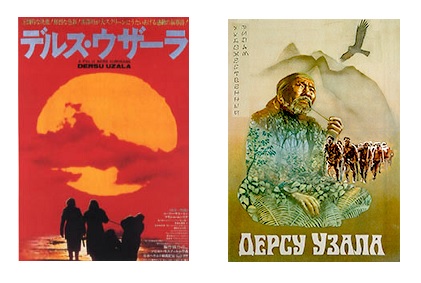 Movie posters for Dersu Uzala in Russian and Japanise, via Mosfilm and Wikipedia. Fair use images.

On YouTube the film is available in two parts, with subtitles in English, Bulgarian, Spanish and Turkish:

1980: Moscow Does Not Believe in Tears by Vladimir Menshov 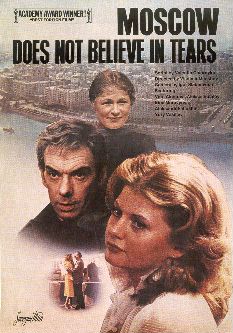 An USA poster for Moscow Does Not Believe in Tears. Source: Wikipedia (fair use).

The urban drama Moscow Does Not Believe in Tears (Russian: Москва слезам не верит) takes its viewers to more modern times, depicting the lives of three women and their families in 1958 and 1979. Written by Valentin Chernykh and directed by Vladimir Menshov, it made a star out of the leading actress Vera Alentova, who was named the best Soviet actress according to a poll by the illustrated magazine Soviet Screen in 1980.

According to the Russian version of Maxim magazine, the film contributed to a ‘pleasant moment’ in world history, during the Cold War détente:

In 1985, before visiting the USSR, the American president Ronald Reagan watched “Moscow Does Not Believe in Tears” in order to get an insight into the Russian soul. Rumor has it that this experience influenced Reagan to remove the phrase “evil empire” from his vocabulary.

This movie's soundtrack includes a number of popular songs such as the Mexican hit “Kiss me a lot” (Spanish: “Bésame mucho”) to the Soviet WWII hit “Let's take a smoke” (Russian: Давай закурим).

The Academy of Motion Picture Arts and Sciences began the Academy Awards in 1956 but the USSR waited seven years before proposing its first Soviet candidate for nomination for Best Foreign Language Film. Even though the Academy didn't accept it as a nominee, the 1962 film Ivan's Childhood became a legend in and of itself, winning critical acclaim and making famous its director, the then-debutante Andrei Tarkovsky.

This war drama tells the story of the 12-year orphan boy Ivan Bondarev and his horrific experiences on the Eastern Front during World War II. Through the swamps and forests of Belarus, Ivan repeatedly joins the Soviet Army and partisans in the fight against the Nazis, in order to avenge the death of his family and the inmates of the Maly Trostenets extermination camp. It's based on the short story “Ivan” by Vladimir Bogomilov.

Ivan's Childhood was sometimes released as My Name Is Ivan in the United States. It won the Golden Lion award at the Venice Film Festival in 1962 and was praised by numerous intellectuals in the 1960s, such as Swedish director Ingmar Bergman, who said that his “discovery of Tarkovsky's first film was like a miracle,” while French philosopher Jean-Paul Sartre devoted an essay to the film. 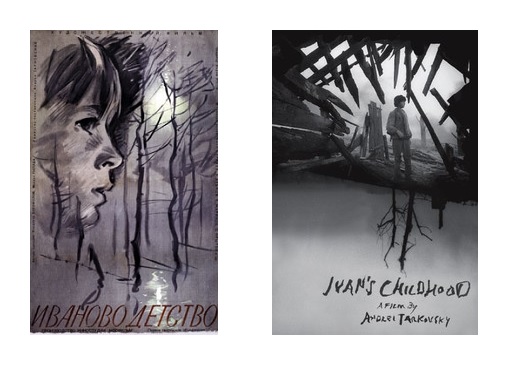 Movie posters for Ivan's Childhood in Russian and English, via Wikipedia and Rotten Tomatoes. Fair use.

This tragic anti-war film was also widely popular and is well known across Central and Eastern Europe, one of the regions that suffered the worst atrocities during World War II. It had commercial success in cinemas after its release in the 1960s, and in the following decades enjoyed a second life through numerous television reruns.

Although the themes and approaches of these four films vary in both scale and tone, they continue to appeal both to critics and viewers. On the film review site, Rotten Tomatoes, War and Peace and Ivan's Childhood have 100% positive ratings on the ‘Tomatometer’, and all four films have high audience scores, from 87% to 94% approval ratings.

If you feel like binge-watching, get ready to spend about seven hours on the first one, and over six hours for the other three.