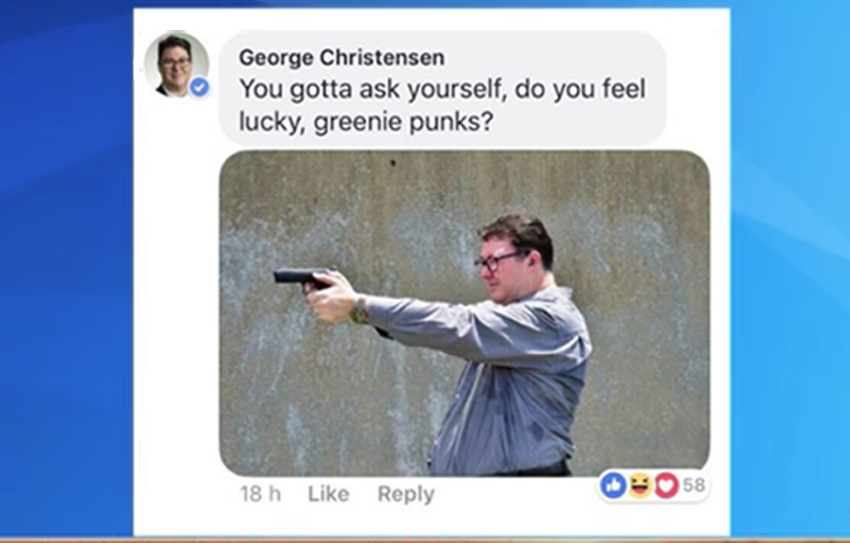 A conservative Australian Federal parliamentarian has caused a stir in the wake of the fatal shooting of 17 people — including 14 students — at Marjory Stoneman Douglas High School in Parkland, Florida. George Christensen’s original Facebook post defended gun owners and included a photo of him with a rifle.

He channeled Clint Eastwood’s character from the 1971 movie Dirty Harry in a comment on the post. A photo of him pointing a pistol had the caption, “You gotta ask yourself, do you feel lucky, greenie punks?” He changed it without apology to, “You gotta ask yourself, do you have a sense of humour, greenie punks?” before deleting it soon after following pressure from his own political party, The Nationals.

The Greens party referred the matter to State and Federal police. Queensland police have apparently dismissed the complaint while the Australian Federal Police are considering an investigation. Prominent lawyer and human rights advocate Julian Burnside spoke for many when he replied to Greens senator Nick McKimm’s tweet:

George Christensen has finally revealed his deepest flaws as a human being.
He debases any party he belongs to.
He does not deserve to be in parliament https://t.co/ohH4eoH7Zm

Others were just as scathing:

So the same week 17 innocent students were massacred in the US, @GChristensenMP chooses to post pictures of him firing a rifle, along with him firing a pistol with a veiled threat to kill greenies.

George Christensen is a real piece of crap. pic.twitter.com/OkXIMh4v9f

However, Christensen has supporters on social media who came to his defense. Daniel Edmonds responded in a post:

A fellow member of parliament and the parliamentary friend of a shooting group, Ian Goodenough, defended Christensen but conceded that it was “an off-colour attempt at humour”.

That was too much for Marcellus Wallace:

Ian Goodenough comes out in defence of Georgie boy. He was just joking about shooting @Greens supporters, what's the problem?
Try going on a flight and having a “lighthearted joke” about a bomb. Shooting people is not a joking matter @GChristensenMP. #auspol #rnbreakfast

The Australian Prime Minister Malcolm Turnbull called it “very inappropriate”. The National party is part of his government coalition.

The Greens taking the moral high ground about inciting violence. Ok then, Sarah.

No matter what your opinion on Christensen is, the act itself was harmless. Shooting a pistol in a controlled environment while making a movie reference as a gentle stab at his political rivals.

The same day Hanson-Young tweeted about a nasty and threatening email she received headed “Bullets’.

Cameron Blewett weighed the issues on his Linkedin feed:

Are we becoming too “sensitive”?

While there is no doubt that George Christensen's post was not appropriate, does it actually encourage cyberbullies?

If that is a “vile” post, the bar may be set too low. And as a consequence desensitises us to what actually is vile.

An offensive social media post. Wow. Form a Strike force. Leave no stone unturned. Place all the murder and rape investigations on hold. Let's get to the bottom of this. https://t.co/jwMVrywJh4

On the other hand, Tom in Oz was not amused. He shared a cartoon by the Sydney Morning Herald’s John Shakespeare that was clearly not meant as a joke: