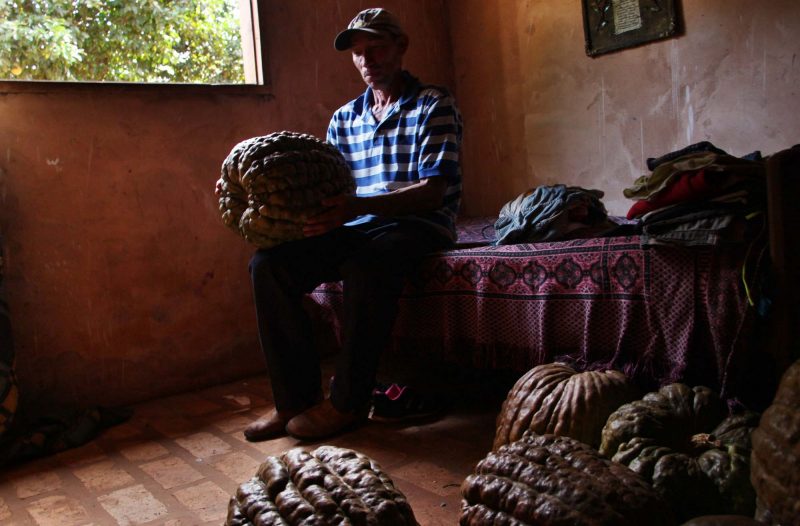 Below is an abridged version of a story produced by Kurtural [1] and republished on Global Voices with the authors’ permission. It is part of the series “The landless don’t go to the supermarket,” which will be re-edited for Global Voices.

As a younger man, Mariano Castro helped found the Paraguayan community of Yby Pytã. Today, he has a five-room house and a farm with chicken coops, pig pens, nine cows and a corn crib filled with six tons of corn he harvested by hand. He has dozens of fruit trees, a wood-burning cook stove, and a newly picked crop of giant orange pumpkins. He’s 55 years old, with calm, vulnerable eyes and a shy smile. With his wife, Élida Benítez, he has eight children and five grandchildren. He has lost one son to prison and another to murder.

But there’s one thing Mariano Castro lacks: a title to the land he’s cultivated for so many years.

One winter morning – a hot and sunny morning like so many others during Paraguay’s winters – Mariano Castro is out in the field, as he is so often before the sun rises. He was born in the city of Caacupé in 1962, one year before the formation of the Institute of Rural Welfare (IBR in its Spanish acronym) and the passage of Paraguay’s Agriculture Bill [2], two changes that have shaped the course of Castro’s life.

When he was 2 or 3 years old, Castro’s father, Enrique, left their home in Caacupé searching for land to farm to support his children. He started near Caaguazú, one of the areas of Paraguay most impacted by the struggle for land reform, an idea that would swamp the whole region in turmoil in the 1970s. In Paraguay, the process of land reform was coopted by then-dictator Alfredo Stroessner to illegally dole out enormous tracts of land to his supporters and friends— about 8 million hectares in all, an area the size of Panama. These improperly allocated lands, called “tierras malhabidas” (ill-gotten lands) in Paraguay, are often the subject of disputes between settlers forming new communities and the land’s putative owners. In his own search for land, Castro’s father would go farther east before finally settling permanently in Curuguaty, a community in the department of Canindeyú on the border with Brazil.

Then, decades later, Castro followed in his father’s footsteps: In the summer of 1996, when Castro was in his early 30s, he found his own land to occupy, located 150 miles from Paraguay’s capital, Asunción.

In 2013, that settlement, which today is called Yby Pytã I, and four other rural neighborhoods joined together to form part of the municipality of Yby Pytã. 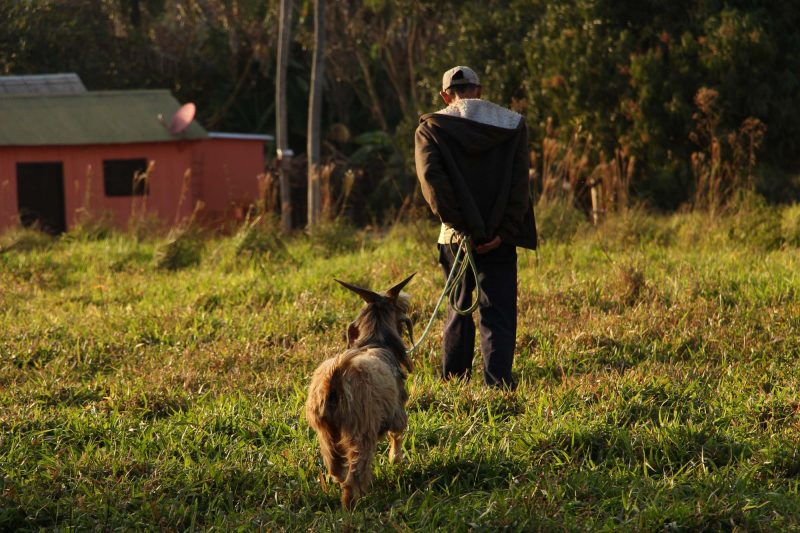 Occupying territory has been the primary means for Paraguayan peasants to gain access to land. Three generations of the Mariano family obtained their property through occupation. Photo by Melanio Pepangi. Used with permission.

The farmland in Yby Pytã had owners, but Castro says that those lands were unproductive estates–large parcels in disuse–and subject to legal expropriation. Furthermore, for him land belongs to the people who use it; to use it, you must first occupy it.

Occupying territory has been the main way rural Paraguayans gain access to land. “There is no settlement or community in this country that did not begin as an occupation,” says Perla Álvarez, a member of the National Organization of Rural and Indigenous Women (Conamuri [3]). Researcher Mirta Barreto, who has written several books about the problem of land distribution in Paraguay, agrees that most of the lands controlled by rural Paraguayans have been obtained through occupation.

How to form a community

Measure, hoe, cut, clear. Plant, cultivate, harvest. Care for livestock. Repeat. This is how land is occupied, how settlements are established, how towns are formed. Mariano Castro knows, because he spent a year and a half doing it. For 18 months, he walked 20 miles from his family’s home in Curuguaty to Yby Pyta in a caravan of young men depleted from the exhausting work of hoeing, cutting, clearing, and still more hoeing, cutting and clearing. 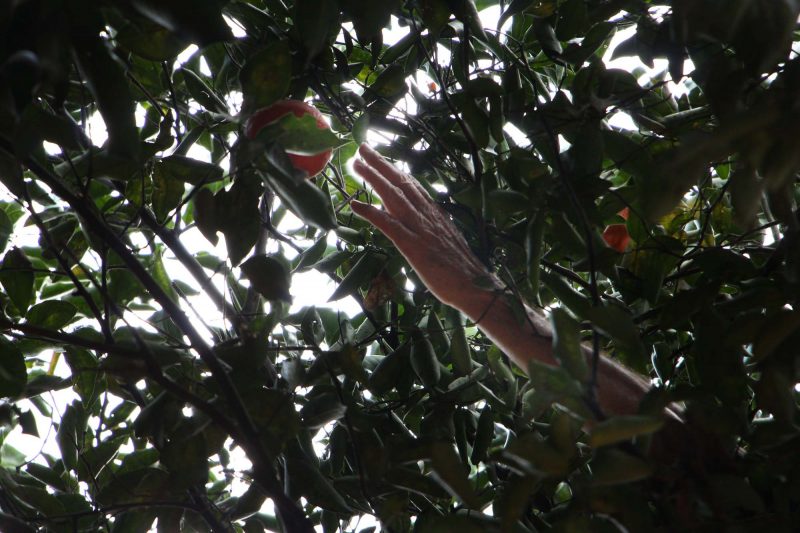 For Castro, land belongs to the person who works it, and to work the land, it must first be occupied. Photo by Melanio Pepangi. Used with permission.

It was a long and difficult journey for Castro. “My kids would ask why I wasn’t home, why I abandoned them. I’d spent two weeks at a time at the settlement. Without transportation, and it being hard to walk so far on foot, sometimes I’d be away from home for a long time,” he says.

But little by little the settlement was taking form: Each member of the group developed their own 25-acre parcels, as stipulated in Paraguay’s Agriculture Bill. Castro built a small house, with bamboo walls and roof of hand-hewn wooden boards.

In 2012, Castro had no reason for concern when three of his sons, Néstor, Adalberto and Adolfo, decided to occupy new lands to farm and raise their families. They would follow in their father’s footsteps, just as Castro had followed in Enrique’s. With Castro’s permission, his children chose Marina Kue for their future settlement, on state-owned land located on the far side of Yby Pytã I.

But on the morning of June 15, 2012, Néstor, Adalberto, Adolfo and other members of the new settlement found themselves confronting more than 300 police officers who had entered Marina Kue to dislodge the settlers. By nightfall, six policemen and 11 peasants had been killed, Adolfo among them. Then, after a long and widely condemned [4] trial in which only the deaths of the police were investigated, Néstor was condemned to 18 years in prison. 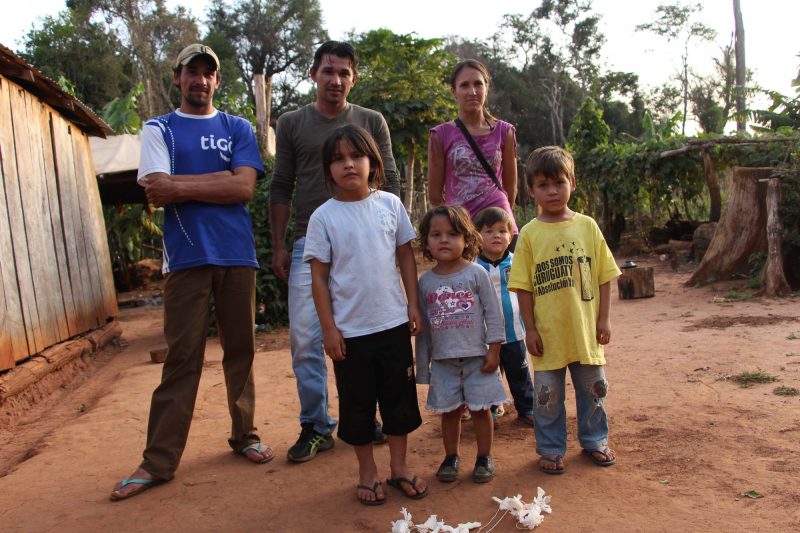 Children and grandchildren of Mariano Castro posed for a photo in Marina Kue on a Saturday afternoon after a meeting of the settlement’s new inhabitants. Photo by Melanio Pepangi, used with permission.

After the June 15 confrontation, which has come to be known as the Curuguaty Massacre [5], Castro abandoned his fields to focus entirely on fighting in Asunción for his sons Néstor and Adalberto’s freedom. He spent years protesting, speaking to reporters, helping with his sons’ legal defense. One by one, he sold each of his 29 cows to pay for their attorneys and medical expenses.

But today, Castro is back in his fields. Settlers have returned to Marina Kue, among them Castro’s sons Adalberto and Rodolfo. Once again, Castro wakes each morning at 4:30 to beat the sun, eats breakfast and heads to the field, to the land made fruitful by his hands, where he spends his days in long sessions of plowing, hoeing, and disking, the land he’s fought for more than 20 years to keep.