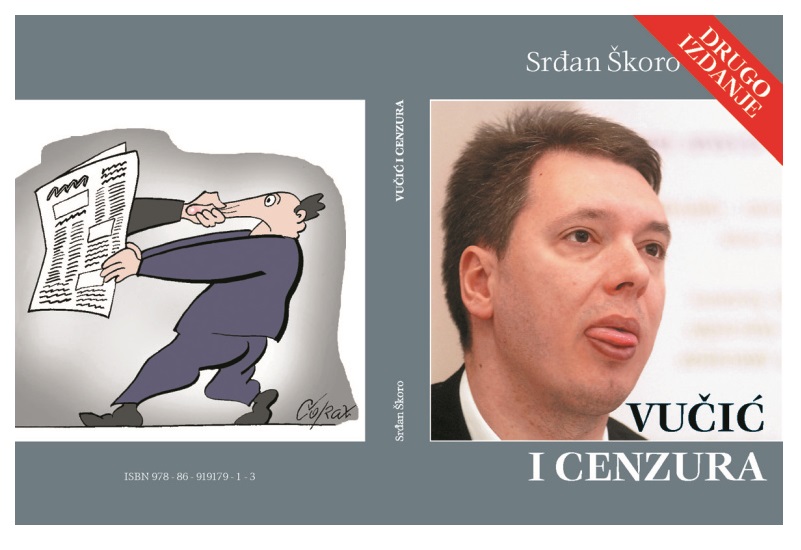 The cover of the second edition of the book “Vučić i cenzura” (Vučić and Censorship) from the blog of the author, Srđan Škoro. The back page caricature is by Corax. Used with permission.

On February 21, a Serbian newspaper censored part of an obituary of a graphic artist, which noted that one of his last works was a book about censorship.

Independent Journalists’ Association of Serbia (NUNS) strongly condemned the censorship of the in memoriam article in the daily Politika, about its recently deceased art director Darko Novaković (1949 – 2018).

Politika removed a segment of the obituary which noted that “one of the last books he designed was entitled ‘Vučić and Censorship,’ and Darko was brave enough to sign his name and surname under his work.”

The obituary, as well as the unmentionable book about the Serbian President Aleksandar Vučić, were written by Srđan Škoro, a friend of Novaković. In response to the censorship incident Srđan Škoro said:

I am lost for words, really. When a government legitimizes censorship, which is in fact forbidden by law, then one can experience censoring of a book title from an article with last farewell from a colleague.

Novaković's son published the full obituary on his website and posted the link and the photo of his father on Twitter.

In their reaction, the Independent Journalists’ Assocation said they were shocked, even though in recent years they have “almost gotten used to examples of quiet censorship and galloping self-censorship… Such political ‘editing’ of obituaries is unheard of even by our most senior members.”

A social media user who shared the link to the announcement compared the current situation in Serbia, under the Serbian Progressive Party, with repression that took place when it was ruled by the Communist Party of Yugoslavia, led by Josip Broz Tito.

The Progressives had begun to censor even the obituaries. Such a thing has not happened even during Broz's regime.

NUNS condemns censorship of an in memoriam article in Politika.
EU & the rest of the free world: “So, what's new in Serbia?”
Serbia: “Censoring obituaries.”
EU: “?!”
Serbia: “You ain't seen nothing yet.”