Protests in Trinidad's Capital as Residents Face Off with Police

A screenshot from a Trinidad and Tobago Police Service YouTube video, showing aspects of a joint police-army patrol after protests in east Port of Spain, January 19, 2018.

On Febuary 19, 2018, many social media users in Trinidad and Tobago woke up to a WhatsApp voice note that had gone viral, warning that certain districts of the country's capital city Port of Spain were blocked off due to street protests over the  fatal shooting by police of Akile “Christmas” James, a resident of the community of Laventille.

Laventille is a low-income urban area bordering the capital. It has been labelled as a “hotspot” and point of origin of some of the country's violent crime. One 2014 Vice News report made specific reference to the country's role in the drug trade and the resulting impact on gangs and illegal guns in the downtrodden community. It is a stereotype that the local media perpetuate and that is often parroted by the rest of society, though some netizens have recently been questioning the narrative.

Police, however, maintain that James was a murder suspect, allegedly in the recent killing of a prison officer. Residents say otherwise.

The situation has highlighted the distrust that community members have for the authorities, as well as the contempt in which much of the rest of the country holds the Laventille community.

The voice note which alerted citizens, sent by an unidentified woman who found herself “in the middle” of a protest, said that residents had blocked the roads and that “guys [were] running around threatening to shoot people”. Sirens can be heard in the background of the recording. Mainstream media journalists soon started tweeting images:

Heavy police and army presence remains in East Port of Spain, following a protest this morning where residents of Basilon Street blocked their roadway as well as upper Picadilly Street, following the killing of Akile “Christmas” James at 3am today.@expressupdates @tv6tnt pic.twitter.com/v6VEA5tBQB

Meanwhile, netizens were recording the protests from their mobile phones. In one incident, a garbage truck dumped its contents — apparently by force — in the middle of an intersection:

Residents were also apparently aided by someone with access to a garbage truck as video circulates online showing the vehicle dumping its contents onto the roadway.
A woman is heard condemning the action while young men are heard supporting it. https://t.co/FRDvIgjJzL

In another video, a woman's voice is heard urging schoolchildren to get away from the heart of the protest. Soon afterward, people run towards the camera while loud noises (assumed to be gunshots) are heard in the background:

The Trinidad and Tobago Police Service soon released a media statement saying that “police and army personnel went into action from 6:00 am today, in East Port of Spain, to quell disturbances among residents and remove debris that had been strewed across several streets, following a police involved shooting incident at around 3:45 am on Monday 19th February, 2018.” The release continued:

Members of the Inter-Agency Task Force attempted to execute a search warrant for firearms and ammunition on premises located at Calvary Hill, when they were fired upon by the occupant of the house. There was a return of gunfire and the suspect was struck. The assailant, identified as Akile “Christmas” James, was taken to the Port of Spain General Hospital where he was pronounced head at 4:20 am. A Glock 45 pistol and seven rounds of ammunition were recovered at the scene. 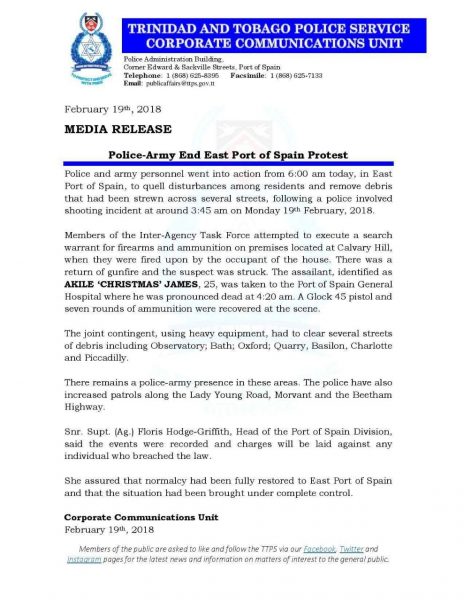 The media statement from the Trinidad and Tobago Police Service about their search operation and the resulting riots in Port of Spain, shared widely via social media.

The Facebook page NewSauce shared the statement and, using the hashtag #extrajudicial, commented, “Police admit they killed ‘Christmas’ and contained the subsequent unrest.”

An extrajudicial killing is exactly what protestors are accusing the police of. One resident was recorded giving an interview to a local television station, in which he said, referring to James, “The person we are talking about is not a person that you would watch and say well, he's a ‘best’ child. Everybody knows he is a child of trouble [but] he had recently come out of prison and since he's come out of prison, you could ask anybody […] he's changed [..] he has a daughter and he's a changed individual.”

The man alleges that video exists of the police knocking at James’ door, which he opened, and then the police “put him to kneel down and execute the young man”. James was 25 years old.

The resident continued, “And what is annoying me, and annoying plenty of the residents in the community is that on the news […] they now said that he was killed in a shootout with the police. If he was killed in a shootout with the police, why they didn't leave the body there for the investigators to come […]?” Calling the situation “overbearing”, the man added, “The same youths who you want to kill out for no reason: now, I'm not saying some of them [are] innocent, I'm not saying they are saints, […] but the right thing is the right thing. What you want for your family, you have to want for somebody else[‘s] own.”

Towards the end of the video, another resident is heard off camera saying, “The prison officer…who dead on Frederick Street…they now saying on the news…” A woman interrupts, “Is ‘Christmas'? Oh God, how they could say that??”

There were also complaints of police threatening and abusing residents. Adding fire to the flame was Ian Alleyne, host of the controversial show “Crime Watch”, who did a Facebook Live broadcast from the community.

On the heels of the outcry, the Police Complaints Authority (PCA) announced that it was aware of the video footage that was circulating and that it has begun an independent investigation into James’ shooting. The press release asked witnesses to come forward with information.

While police regained control of the streets, there was another surge of unrest later in the day, resulting in the shooting of another man from the area, some say by a stray bullet. Others are blaming the police.

The protest action caused chaos in downtown Port of Spain, with commuter gridlock, some parents taking their children out of nearby schools, and three health centres unable to open for business.

Some social media users were unmoved by the plight of the protestors. In a public Facebook post, Gerard Joseph commented:

Only in sweet T&T ….this could happen, and allowed to happen. I do hope when when the tables turn on you….dont say oppression…..you holding the working and travelling public to ransom…..on a Monday ?…I have no pity

Emily Alexander reverted to the common narrative that dismisses such protestors as “pests”:

Steupzz setta pest. Why don't they protest like this when innocent ppl are killed and robbed by these same criminals they're defending?

Steups. They are a set of pests. Why don't they protest like this when innocent people are killed and robbed by these same criminals they're defending?

So…. an alleged criminal is killed by police and East Port of Spain erupts into protest!…. But school children could get bun up [burned to death] in a car and people being robbed, raped and killed daily… no protest?… ??
Hmmm….

Perhaps the narrative — from any quarter — hasn't changed much after all.