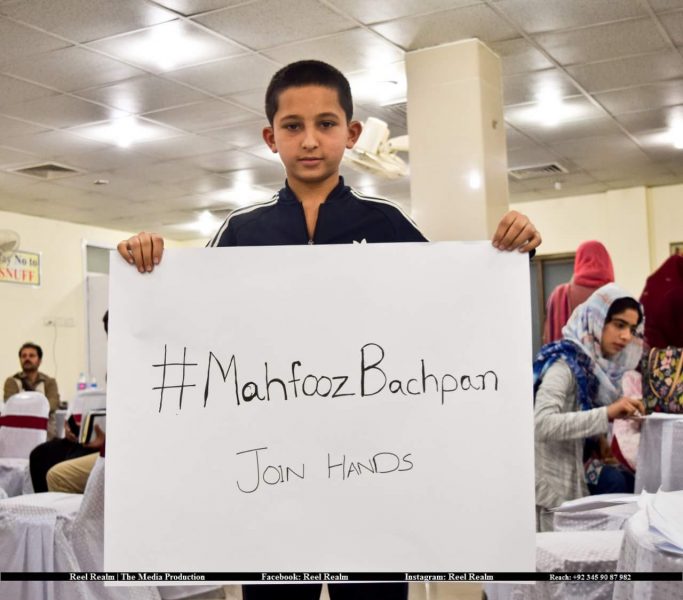 A child holds the campaign poster at a #MehfoozBachpan (Protected Childhood) seminar. Photo used with permission.

On January 9, 2018, a seven-year-old girl named Zainab was found dead on a heap of garbage in Kasur, Pakistan. The minor was strangled to death after being raped. This incident shone a spotlight on child sexual abuse in Pakistan. Activists led protests and demonstrations demanding quick action against the person(s) responsible.

Subsequently, the police arrested the alleged perpetrator, Imran Ali, on January 23, 2018. On February 17, after an expedited trial, a Pakistani anti-terrorism court has handed down a death sentence to Ali for the rape and murder of Zainab.

Despite the fact that the alleged culprit was arrested and tried, people from all sections of society raised concerns, demanding the establishment and implementation of tougher laws against child sexual violence.

Bushra Iqbal Hussain, a journalist with the Waziristan Times, along with fellow activists, launched an online and offline campaign titled #MehfoozBachpan (Protected Childhood in Urdu language) which calls for legislation for safeguarding children. The campaign also encourages concerned citizens to vote only for political parties in the upcoming general elections in Pakistan that have a policy for child sexual abuse.

Hussain, also a television and radio presenter, and social activist working in the field of violence against women and children, promotes this campaign to ensure that Pakistani children enjoy ‘protected homes, protected schools and protected playgrounds’ with the help of a more aware and vigilant society.

Being a journalist I always feel a need to address the youth. Most often we talk about the deprived children but lack a holistic approach towards an overall situation of children, especially their psychological, emotional and physical grooming. And this blind eye attitude made our children vulnerable. In recent days many cases of child sexual abuse and killing burst the artificial bubble of our social moral structure.

Hussain believes that parents lack awareness that leads to cases such the rape and murder of Zainab. Twitter user Amjad Qammar expressed frustration over parents’ general lack of awareness while sharing an incident from Karachi, Pakistan:

Today, in Karachi a cleric in a Madrassah (religious school) raped and killed a young boy. That boy had earlier ran away from the Madrassah and expressed fear. Yet, his father still handed him over to the cleric. Who is responsible in the murder of the child?

Hussain is holding workshops with parents in order to teach them how to safeguard their children and teach them about the notion of “good and bad touch,” a common way to talk with children about inappropriate touching and ownership over one's body. The first seminar was held in Peshawar, the cpital of Khyber Pakhtunkwa province of Pakistan. Her campaign is in the initial stages and she believes she will be able to reach out to as many people as possible.

A seminar was conducted by Bushra Iqbal on the theme of #MehfoozBachpan that how we can protect our children and can compete with burning situation after #Qasoor and #Mardan incident. It should be the manifesto of political parties in the upcoming election. pic.twitter.com/iLdqoiqZg7

Some parents initially deny their carelessness on their kid's wellbeing but later they understand when I tell them children are young individuals with their unique needs, you may buy them everything on earth but they will still need your time, care and love. The concept of “respect your children” is novel for many. And mostly fathers in our society think that it is a mother’s responsibility to safeguard children but I try to change this mindset by saying that children are not a liability but a blessing that both parents enjoy so both are responsible.

Hussain says that media has always been an important part of our society and thinks that media can spread information and generate debate. Qammar agrees:

@Malala #mehfoozbachpan is a campaign to support the party that will make legislation for child protection in Pakistan. pic.twitter.com/jPbb9yfIhX

Protected childhood is a collective dream, each of us is responsible for our children. We must try to stand with parents who lost their kids, create awareness, talk to parents, involve local leadership and make a demand. We will vote for protected childhood in next election.

The Zainab rape and murder case had a swift trial as it received international media attention as well as much attention and pressure from citizens. The verdict has offered hope that such cases can be dealt with swiftly to enforce the rule of law and prevent such crimes against children from happening again.

Pakistan has an existing child protection bill which is not without flaws and the lack of enforcement of the law is not a major concern for the politicians.

So, the predicament of child sexual abuse still exists in Pakistan, and more awareness campaigns such as #MehfoozBachpan are required to end it.