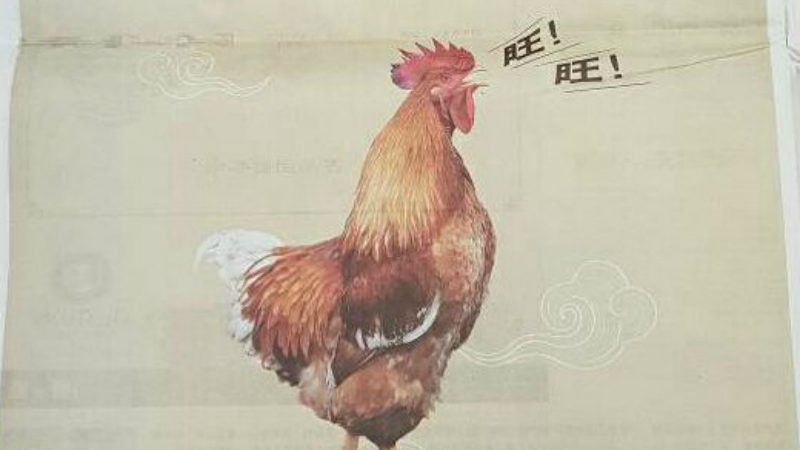 Malaysian government greets the Chinese Year of the Dog with a barking rooster ad. Image cropped from the Facebook page of Malaysia’s Domestic Trade, Cooperatives and Consumerism Ministry.

Malaysia’s Domestic Trade, Cooperatives and Consumerism Ministry (KPDNKK) has apologized for using the image of a barking rooster in a newspaper ad to greet the Chinese a prosperous year of the dog.

Malaysia has a Muslim-majority population while promoting social harmony among various races and religions. In recent years, however, hardline Malay Muslim leaders have been voicing out the need to enforce Islamic teachings in governance.

The ad is seen by some as a reflection of the cultural conflict between some Muslims and the Chinese minority. The opposition Democratic Action Party criticized the ad for stoking division and undermining multiculturalism in society.

The ministry issued a million apologies (a Chinese expression of deeply regret), saying that it was a “technical error” without further explanation. But the majority of the netizens didn’t accept it. One comment said:

This department needs to be more cultured or exposed to the understanding of other cultures. This is really embarrassing and reflects the ignorance of your department. A barking rooster? Seriously? What planet does KPDNKK live on???

Our institutions are either gripped by a tide of Islamic conservatism, or are paralysed by supervisors who are lazy, and do not believe in proofreading.

Meanwhile, some Chinese netizens believe that the barking rooster was a mockery of current Prime Minister Najib Razak who is nicknamed “that rooster” because the pronunciation of Najib is similar to “Na-Ji” (那雞) in standard Chinese (Putonghua). A famous video blogger called “So I'm Jenn” talked about the symbolism of the barking rooster in her Lunar New Year greeting.

This is not the first time that dogs have been the subject of controversy in Malaysia. In 2016 a pretzel chain store was recommended by the Malaysian Islamic Development Department’s (Jakim) to rename its “Pretzel dog” to “Pretzel sausage”. In October 2014, a young Muslim activist, Syed Azmi Alhabshi, organized a “I Want to Touch a Dog” event to challenge the Muslim taboo and ended up receiving death threats. He was forced to apologize.

Malaysian Chinese constitute about a quarter of the country’s population. Since the year of the dog will be succeeded by the year of the pig, it seems likely that the cultural conflict over the Chinese Lunar New Year will be difficult to avoid next year. But hopefully, Malaysian authorities have already learned their lesson about the importance of upholding multiculturalism.