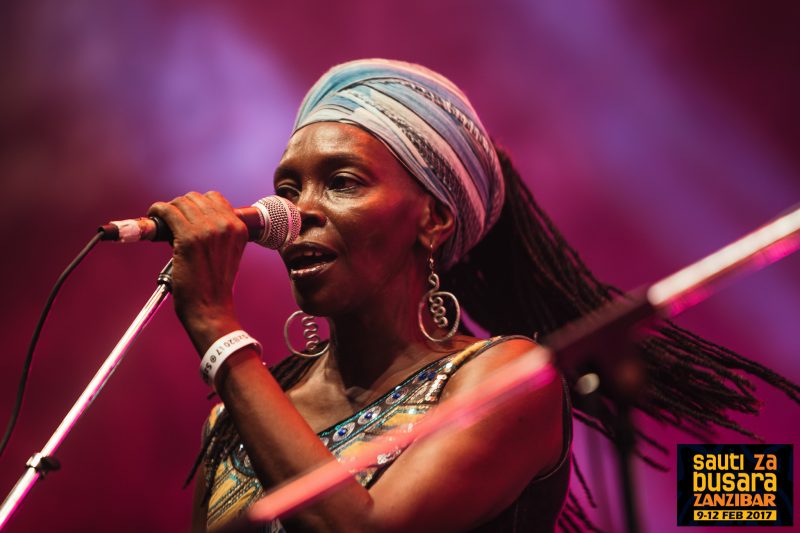 Sauti za Busara (‘Sounds of Wisdom’ in Swahili), widely known unofficially as East Africa’s “friendliest music festival,” kicked off its 15th edition on February 8, 2018 on the semi-autonomous islands of Zanzibar with four full days of live music from Africa and the diaspora. Held yearly in the Old Fort in the capital city of Stone Town, this year’s event had the theme “United in Music” and aimed to increase peace and unity in an increasingly volatile, oppressive and divided world.

As part of the festival, the daily networking series Movers and Shakers invited industry stakeholders to the table for three days of dialogue related to music on the continent. The first day featured a conversation on “music for change” moderated by festival director Yusuf Mahmoud, who opened the session by posing the question, “Can one song really change the world?”

From Billie Holiday’s “Strange Fruit” to Bob Marley’s “Get Up, Stand Up” to Tracy Chapman’s “Talking bout a Revolution,” Public Enemy’s “Fuck the Police,” and Kendrick Lamar’s “We Gon’ Be Alright,” Mahmoud insisted that one song does indeed have that power and panelists Isack Abeneko of Tanzania and Herman Kabubi of Uganda shared stories on the ways in which change manifests in their respective countries as musicians, poets, and cultural organizers.

Abeneko, an artist, actor, dancer, and choreographer whose popular song “Salam” hit the airways in 2017, says he wants his songs’ messages to go beyond “flag-waving”:

I want young Tanzanians to appreciate one’s own musical heritage. We’re losing a sense of ourselves in Dar.

Dar es Salaam, Tanzania's cultural capital, is known as “Bongo” or “brain” in Swahili to imply the madness of living in one of Africa’s most bustling megacities. “Bongo Flava,” its unique musical genre, is often fueled by iconic images of booty-shaking, poolside glamour, masculine posturing and fast cars. But Abeneko’s songs are so much more than that:

I decided to call my music ‘Bongo Fusion,’ because it’s not exactly ‘Bongo Flava.’ I sing about street children, I sing about economic struggle, I sing about peace in the family, and my music goes beyond the studio. I want to play live. But when we distributed the songs to local DJ’s, they just told us there’s no program for that. I realized that change has to start with my own networks, building and keeping real friendships, connecting with my audiences. I believe that change happens with one person at a time.

Herman Kabubi, also known as “Slim MC,” from Kampala, Uganda is a poet and program director with the Bayimba International Festival of the Arts who is most drawn to change via programs that challenge stereotypes about Africa:

When I curate programs, I am looking for the new stories we want to tell about the continent, but also ones that will respond well with our audiences in context. I'm looking for what we call critical content.

Kabubi said he applauds artists, programmers, and cultural activists who buck the system by creating new ones outside the mainstream:

I want to curate programs that spark conversations, either by presenting a new technique, new content, or pushing limits, but always with our audiences in mind, and this includes creating spaces for LGBTQIA expression.

Kabubi also intimated hope when he referred to musician Bobi Wine (Robert Kyagulanyi Ssentamu) who was recently elected to the Ugandan parliament and wants to “use music to unite people” in Uganda. Prior to Uganda's 2016 elections, Kyagulanyi released a song titled “Situka,” which means rise up in Luganda; the lyrics included a provocation to fight corruption and injustice:

When the going gets tough, the tough must get going, especially when our leaders have become misleaders and mentors have become tormentors. When freedom of expression is met with suppression and oppression.

Abdi Rashid Jibril, a promoter and producer with Roots International music and events production company based in Nairobi, Kenya, was quick to remind the panel and audience members about the significant pressures faced by artists who take risks as activists and artists with a message:

We live in an era of repression all over the world, but especially in East Africa, we live within a cultural moment and movement where artists are putting themselves in great danger. I challenge advocacy groups like Music in Africa and Busara Promotions to pay attention to artists in prison or who have been arrested for taking a stand against this repression. Artists need solidarity with the international community who can put pressure on governments to ensure that artists and cultural activists don’t continue to get shut down, as they have been recently especially in Nairobi.

On January 31, Amani Baya and Jack Muguna of Nairobi Horns Project were arrested on what Jibril calls “trumped-up charges that reflect the impunity and gross unfairness of our legal and enforcement systems,” and called on fans of Jibril’s highly popular Choices Thursday Night — Live music event:

[C]ome one, come all Nairobi City Hall Magistrates Court, bring a folded sign that we can unfold chest level when our friends are brought up. Free Amani & Jack. Free the Music.

The two have subsequently been released on a 200,000 Kenyan shillings (2,000 US dollars) bail and their accusations of “noise pollution” were scheduled for a hearing on February 15.

Persecution of musicians is an issue that goes beyond Kenya. In Ethiopia, for example, musicians repeatedly faced terrorism charges for their song lyrics.

It did not go unnoticed that the all-male panel appeared at odds with the subject of music for change in Africa, where gender inequality still remains the elephant in the music industry’s room. Carola Kinasha, a pioneering cultural activist and award-winning musician based in Dar es Salaam who was also the MC for this year's festival, explained that women in Tanzania don’t enjoy the same intellectual rights as men to compose and produce their own lyrics:

Let me just say, the DJ’s in Dar dictate everything, what is in — what is out, and I totally disagree with this.

if I produce an album with nine songs on it, eight could be about social issues and only one’s about love. That one song about love will be the one that gets played on the radio.

[E]xpressing ourselves is much more difficult these days in Tanzania, with artists being arrested, intimidated, missing and beaten. This tells me that it’s not just a gender issue, but an issue with the rights of all musicians to speak out. This tells me how powerful music is. If it wasn’t this strong, it wouldn’t be so feared.