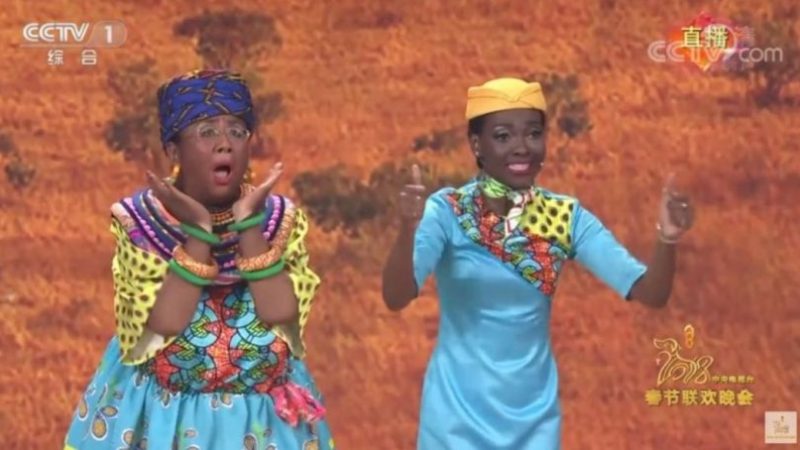 This post was written by Jun Pang and originally published on Hong Kong Free Press on February 17, 2018. The version below is published on Global Voices as part of a partnership agreement.

China’s official news channel CCTV has come under fire over a “racist” comedy sketch showing an actress in blackface.

The four-hour Spring Festival Gala is televised annually in celebration of the Lunar New Year. On February 15, 2018, the Gala included a sketch set in Africa to commemorate the 2017 establishment of a Chinese-funded railway between the cities of Nairobi and Mombasa in Kenya.

In the segment, an African actress asks the Chinese host to help dissuade her mother from matchmaking for her. Then the mother, an older Chinese actress in blackface and buttocks padding, enters the stage, alongside actors dressed in monkey and giraffe costumes. She mistakenly believes that the daughter and the host are engaged.

“I love China, China helped us build a railroad. I want to find a Chinese son-in-law,” she says.

When the actual fiancée of the Chinese host arrives to interrupt the festivities, the daughter tells her mother the truth.

“Mother, I don’t want to get married so young,” she says. “I want to go to China to study abroad. I want to be like Chinese people – to roll up my sleeves and work, to earn the praise of the world.”

The segment drew ire from Weibo and Twitter users for its use of blackface and stereotypical representations of Africa. Blackface is a practice by which non-black actors darken their skin in order to mock the appearance and mannerisms of black people.

The problem with this segment is its narcissism. To show yourself assisting Africa, making it out as if African people are extremely jealous of China – as if they should be grateful to China. Isn’t China’s construction project in Africa supposed to be a win-win situation?

This episode is racist. It has exploded in foreign media. This is understandable.

CCTV’s racist show during Spring Gala shook me and made me so ashamed of China and my people. They literally had blackface on stage, had an African actor to play a monkey and a African actress yelling “I love China!” Racism is global y’all…

CCTV’s racist show during Spring Gala shook me and made me so ashamed of China and my people.

My first Chinese New Year watching the annual CCTV spring gala and they trot out a Chinese lady in blackface, exaggerated proportions and everything, with a pet “monkey” (played by a man from Cote D'Ivoire), shouting “I love China!” – I can't even pic.twitter.com/n3J1YsRhmy

Not all perceived the sketch to be racist. Online media SupChina's managing editor Anthony Tao said it was not intended to offend, but the producers “are guilty of laziness or ignorance or most likely both.”

In 2012, the Spring Festival Gala broke a Guinness World Record for the most viewed national network TV broadcast show, reaching a viewership on 498.7 million. Since then, the number has reportedly risen to 700 million.

The Gala is viewed as one of the most important platforms for spreading political propaganda; as such, it also attracts a large amount of criticism. In recent years, critical comments about the content of the Gala have been censored on major Chinese social media platforms. This year, China's most popular social media platform Weibo also blocked a list of combination search terms related to the Gala, like “Spring Festival Gala” + “ridicule”, and “Spring Festival Gala” + “garbage”.

CCTV has since removed the sketch from their official YouTube channel.