As Some March to Honor a Pro-Nazi General in Sofia, Others Rally to Decry Fascism 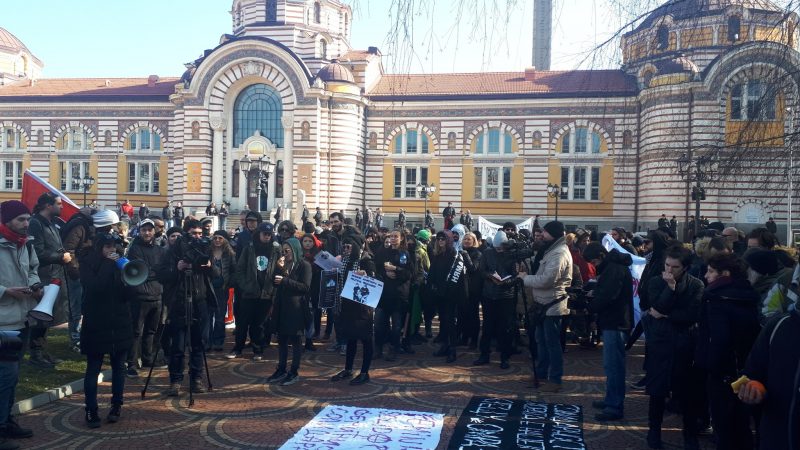 February 17 was a busy day in the Bulgarian capital Sofia, where far-right supporters marched to mark the 75th anniversary of the assassination of pro-Nazi Bulgarian defence minister Hristo Lukov, and counter-protesters responded earlier in the day with condemnations of nationalism and xenophobia.

The demonstration showed that the country currently holding the Presidency of the European Union is grappling with many of the same issues seen elsewhere across Europe, including the mainstreaming of neo-fascist politics.

For the last 16 years, the Bulgarian National Union (BNS) has organized the Lukov March through the streets of central Sofia. As Canadian journalist Michael Colborne explained:

The march, which will take place this Saturday, is in honour of Hristo Lukov, a Bulgarian general who led the pro-Nazi Union of Bulgarian National Legions, an organization that in a previous incarnation had a swastika in its logo. Lukov had close ties with Nazi leadership, including Hermann Goering, and was one of the fiercest advocates of Bulgaria’s Nazi-inspired “Law for the Protection of the Nation” that, among other things, forced the country’s 50,000 Jews to wear yellow stars.

Yet they insist there’s nothing anti-Semitic or Nazi-like about it.

Every year marchers from Bulgaria and beyond drape themselves in mourning black, hold torches and chant Lukov’s praises in unison as they wind their way through Sofia’s streets. The march ends at the home where Lukov was assassinated by Communist partisans in February 1943, where the marchers lay wreaths.

Among its stances, the BNS, which doesn't hold any seats in the country's National Assembly, promotes an intolerant view of immigration (“Bulgaria for the Bulgarians and Africa for the Africans“), rejects Bulgaria's current multiparty parliamentary democracy, and calls for “a strong centralized state power.”

The day before the main march, Lukov admirers put on an intimidating display, walking through central Sofia, shouting slogans and carrying flares and torches. The police did not intervene.

‘No Nazis in the Streets!’

On February 17, a group of around 300 counter-protesters gathered in the park near the Sofia Mosque and the Sofia Central Mineral Baths around noon. They then made their way through the streets around the Central Halls district, the synagogue and the offices of the nationalist political parties IMRO -Bulgarian National Movement and Attack, which are part of the government.

Carrying banners such as “No Nazis in the Streets!” protesters shouted in support of refugees and minorities, and also against nationalism and capitalism.

In addition to Bulgarians, participants came from Greece, Italy and Spain. Police did not allow the counter-protesters to pass through the central streets, citing security concerns due to possible clashes with the attendees of the Lukov March, who already roamed through the city in groups.

At one point, members of a German nationalist group tried to provoke the counter-protesters. Such incidents happened several more times. Police arrested one provocateur.

As for the Lukov march, police estimated that more than 500 people attended, while the organizers previously said they expected around 1,000 to participate.

There was a visible presence of neo-Nazi groups from within Bulgaria and around Europe. Despite this, the BNS denied the allegations that the march was anti-Semitic or neo-Nazi.

A family huddled in a corner as far-right Lukov march passes by in Sofia, earlier today. The little girl is covering her years. pic.twitter.com/5F17mnUSYe

Every major political party in Bulgaria has condemned the Lukov march, including representatives from the far-right United Patriots, although some of its members have actually taken part in the march since the beginning. Sofia’s Mayor Yordanka Fandakova tried to ban the march, but the organizers took her to court and won.