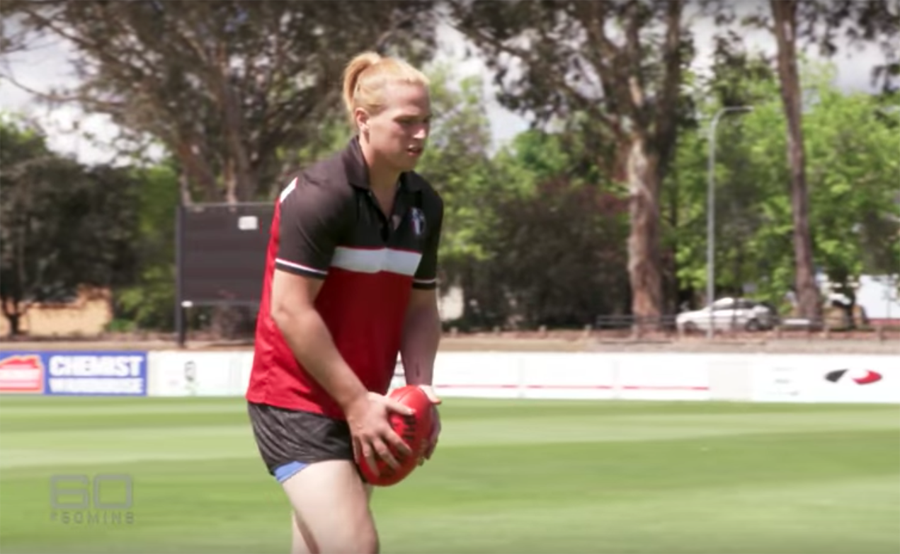 A transgender Aussie Rules football player has finally been given the go-ahead to compete in state level women’s competitions. In 2017, Hannah Mouncey was denied the opportunity to enter the national Australian Football League Women’s (AFLW) draft. The AFLW season is currently underway.

Her “strength, stamina, or physique” were among the factors taken into consideration at the time. Hannah is 190 centimeters tall (6 feet, 2 inches) and weighs 100 kilograms (220 pounds). She represented her country at the 2013 World Men's Handball Championship as Callum Mouncey.

Following hormone treatment, Hannah is currently below the maximum testosterone level set by the International Olympic committee. The original rejection was certainly controversial, with vocal group agreeing with the decision in various shades, from decrying her participation as unfair because of the sex she was assigned at birth, to spurning the very existence of transgender identity.

The latest decision has brought similar responses on Twitter. This one is from a self-styled cycling expert Bolar:

This wont be a popular tweet but Hannah Mouncey, a biological man who weighs over 100kg who has had a sex change but kept his tackle can play in a womens league against females that weigh ave 60kg is a joke. Feel sorry for the girls who are going to end up with countless bruises.

Others such as Dreama40 have been more sympathetic:

I admit i dont understand the whole Trans thing BUT, i do believe that it is very REAL to them and i respect their courage for living life as their true selves because that must be very hard to do.

The sport’s governing body, the Australian Football League, and Hannah herself have copped a backlash on social media following the green light for her to compete. But Twitter user Catkin rejected the negativity:

I keep noticing that all the trolling I’ve seen on positive posts about Hannah Mouncey being allowed to play football are from men. 🤔 Anyway, I’m pleased that she’s allowed to play, even though that should have been resolved ages ago.

So did Daniel Carroll:

Hannah, you are one hell of a human being, hang in there; you have a lot of true support.

Hannah uploaded a video response to the latest news:

She was forthright about the AFL’s decisions:

I cannot thank the AFL for allowing me to do something that is open to every other Australian and which the science and research has supported all along.

[…] many people will wonder why I say football doesn't matter when for so many people is such a huge part of their life and clearly mine but to understand why I feel that way you need to first understand what so many people trans people go through on a daily basis and not just when they transition.

She discussed the problems that transgender people face daily such as discrimination when looking for housing and employment, and the rejection of close friends and family.

She was far from convincing everyone, with some accusing her of acting “entitled” to a spot in the AFWL. Web developer and runner Mike Haydon attempted to be a voice of reason:

As for the Hannah Mouncey case – we're not privvy to all the tests run on her. Nor should we. If the AFL says she can play in the women's division and she's good enough to do so, then play away I say. Case by case basis. Very rare situation anyway.

We can only hope that more people online will approach the issue with an open mind.