‘India’s Only Positive Newspaper’ Brings Readers a Dose of Hope 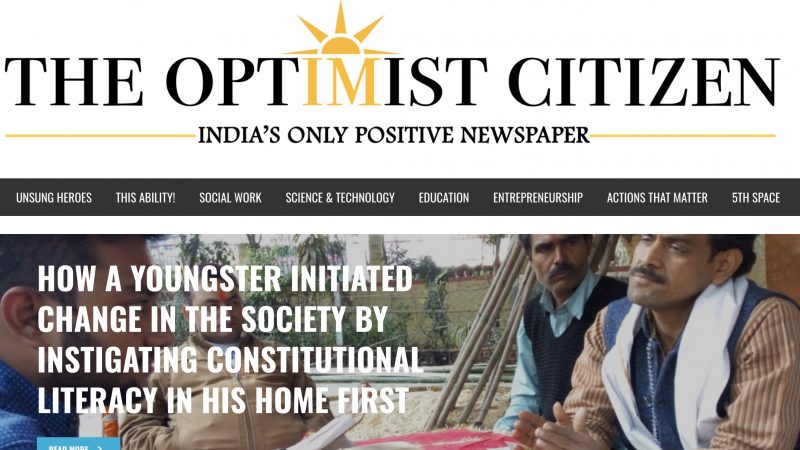 This post was written by Madhura Chakraborty, and originally appeared on Video Volunteers, an award-winning international community media organization based in India. An edited version is published below as part of a partnership with Global Voices.

Piyush Ghosh and Tuhin Kumar Singh, two young friends in Bhopal, the capital of the Indian state of Madhya Pradesh, used to despair at the negativity emanating from the newspapers every morning. As a consequence, society becomes paranoid with a sense of fear and doubt. People are afraid of trusting each other and lose confidence in organizations, politicians, and the system.

The two thought, “What could be the solution? How to inspire people instead of pushing them further into despondency?”

Then a small idea came to them — a newspaper full of optimistic news. And now they are reaching every corner of India with their unique newspaper.

They launched the online and print fortnightly publication, self-branded as “India's first purely positive and good newspaper”, in October 2014, and it now has subscribers all over India now, who pay a small subscription fee of 290 Indian rupees or 5 US dollars per year.

The Optimist Citizen focuses on presenting only positive news ranging from stories of inspiration, unsung heroes, good governance, and acts of courage —  stories that aren't often picked up by mainstream media outlets, as they, as they do not create a sensation.

Saloni, with her friends, understood their constitutional rights and duties by convincing the People of Harda to educate their daughters under the Samvidhan Live! The Jagrik Project public initiative by ComMutiny – The Youth Collective. https://t.co/sO1pk6Kbdo

“We called a small public meeting in a park here in Bhopal. From that day on we started working towards our first edition, our mission and vision,” recalled Tuhin.

Piyush chimed in, “My parents are social entrepreneurs and their work is so inspirational. So I felt that we should use inspirational stories to motivate people instead of negative news.”

And so started the journey of The Optimist Citizen.

Neither of the co-founders had a background in media. “We didn’t know what kind of paper is used to print newspapers or even the difference between broadsheets and tabloids!” admitted Tuhin.

In fact, all the employees on board learned and grew with the newspaper. Tannson Matthews, the marketing director, talked about this journey to community correspondent Ramlal Baiga. “Once we started the paper, we realized there are different segments to cater to,” he said.

Despite all this, the duo has managed to build a successful media brand, with a solid online presence, from scratch.

Tuhin elaborated in an interview to Entrepreneurship India magazine:

The role of media is to disseminate news in the most unbiased and true format possible. But, often, in our globalised world, it is completely opposite. We felt if negative news and stories can bring about such negative actions, why not publish and present positive stories that can bring about a larger positive impact.

Stories like that of a 10-year old underprivileged girl who runs a library for kids in her slum, an Israeli man who came to India and grew an edible forest on a 70-acre barren land, a couple who started a foundation for children with rare diseases after they lost their infant daughter, a German artist who is transforming a village in Himachal Pradesh into an art hub to increase the tourism and livelihoods in the village and so much more. It was these stories that inspired us and we believed they can inspire millions more.

It is indeed heartening to read their stories of positive change in these trying times. Instead of devoting space to the antics of media-hungry politicians, or page-three gossip, we learn about entrepreneurs and Good Samaritans across the country. These stories, neglected by mainstream media, are highlighted across different sections of The Optimist Citizen.