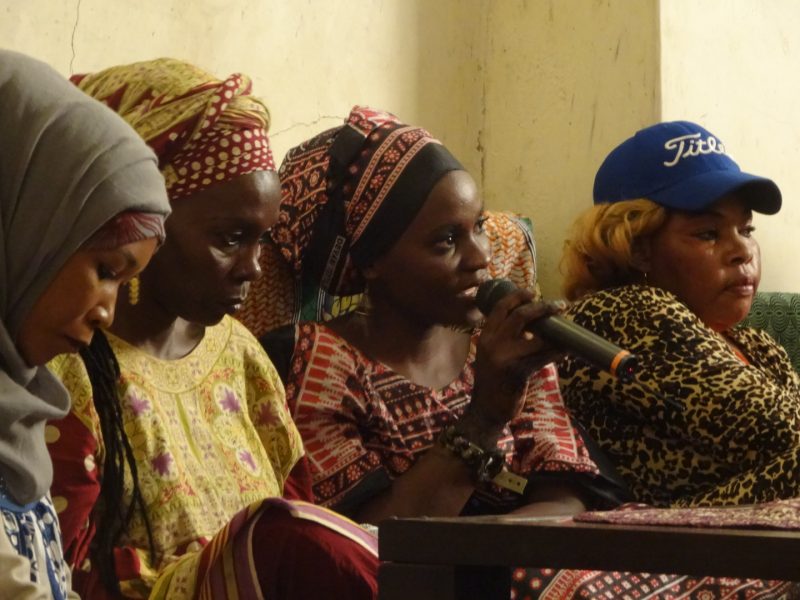 “Women in music: We have made ourselves known in the music industry around the world. Yet gender inequality, sexism, and pay gaps persist,” said Carola Kinasha, a Tanzanian-based musician and activist who recently moderated a panel discussion on women in music.

“It’s not that we’re not skillful enough. It’s that all the decision-makers are men.”

The panel was part of the three-day Movers and Shakers networking series within the 15th edition of Sauti za Busara (Sounds of Wisdom, in Swahili) music festival in Stone Town, Zanzibar.

On February 10, Kinasha spoke about the challenges women face in the music industry with leading women artists American singer-songwriter Somi; Tanzanian singer and musician Saida Karoli; Amina Omar, of the Zanzibari group Siti and the Band; and Zeitun Amour, a representative of the Copyright Society of Zanzibar (COSOZA).

Kinasha opened her remarks by pointing out that in the United Kingdom, women make up only 16% of the leadership within the music business. While limited data is available on the status of women in music throughout Africa, “Clearly, there’s a major issue with male domination in the music industry,” she said.

Somi, a jazz artist with roots in Uganda and Rwanda who now lives between New York City and Johannesburg, describes how pushing back against tradition has been her biggest challenge as an African woman in music:

Being part of an immigrant family and choosing a path as an artist had its challenges. I had to think carefully about when and how and in which spaces we as women are supposed to use our voices.

Saida Karoli, one of Tanzania’s most popular singers who stole the hearts of festival goers with her electrifying nighttime performance on February 10, spoke with raw truth about the myriad challenges she has faced as a woman in music in Tanzania, highlighting intersectional injustices as a poor, uneducated woman from the remote village of Rwongwe, in the Bukoba region of Tanzania around Lake Victoria.

Karoli started drumming at the age of five, going on to write and produce five albums to critical acclaim:

I’m from a small village and I was an orphan. I didn’t have any idea how to make it in the music industry and my manager was like my father, I believed in him wholeheartedly.

With her manager “Muta” at the steering wheel, Karoli’s popularity grew as she traveled the region from Burundi to Rwanda to Uganda, packing venues to such an extent that four people once allegedly died of suffocation. Yet according to Karoli, her manager exploited and abused her talents, claiming copyrights on all her songs and albums:

I was young, inexperienced in the music business, and at the end of the day, I didn’t have even 100 shillings [0.10 US dollars] in my pocket. Life has been hard.

Karoli revealed that while her manager opened new doors for her, he also kept her behind closed doors for a period of seven months like a prisoner, refusing to allow her to speak with other managers or producers. When she finally decided to break away she went to the port city of Mwanza, where, she said:

I hid from my fame. I was ashamed. I didn’t know how to advocate for myself. I had no rights in this work. When the journalists came asking for interviews, I just ran. I couldn’t face the shame.

Amour, Zanzibar’s authority on copyright issues, assured Karoli that as the author of all her music, she still does have basic rights under the Copyright and Neighboring Rights Act of Tanzania (1999), but that it depends on the actual existing signed contract and the case demands further investigation and legal representation.

Karoli, who no longer works with a manager, said she is counting on her debut back in the spotlight at Sauti za Busara to boost sales and build a name for herself again after years in the shadows.

Amina Omar, lead singer of Siti and the Band who lit up the festival stage on February 10 with soulful Taarab (Zanzibari soul) fusion roots, expressly thanked Karoli for speaking out on a subject so few women in the region are willing to touch — the various forms of abuse and harassment women face not just in music but within society as a whole.

Omar remembers singing at 11 years old with her sister Rahama, now an award-winning violinist in her band. But neighbors and family members frowned on the girls’ musical inclinations and eventually, her family encouraged her to marry and have children as is the tradition within Zanzibar, an archipelago where most families follow conservative Islamic customs:

So, I got married. I had my first child. My husband told me he’d support me as a musician, but when our child was grown enough to let me go back to singing, he simply said no. ‘No,’ he said. ‘You are my wife. I own you. You have to do what I like.’

When Omar decided to enter as a contestant in “Bongo Star Search,” an interactive musical reality television show based in Dar es Salaam, Tanzania, it sparked a violent argument with her husband. “You know, I never really talk about this but to this day, I still can’t see very well from one eye, and it’s from that night,” Amina revealed, pointing to her right eye. She struggled to leave her husband in Dar es Salaam and rebuild a life for her and her son back home in Zanzibar:

I love Zanzibar, I love my society, but there are good aspects to it as well as bad. I don’t like the idea that women are forbidden to speak in public in my society. I don’t like the position of women. I also don’t like that when my society sees me succeed, some want to keep me down. When I came back to Zanzibar, I joined the Dhow Countries Music Academy and got my education, and now I know who I am. I really love singing, it’s my life and it’s in my blood.

Women in music often seek out role models to guide them on the path, but according to Somi:

[W]e have so few role models as African women in music, that we’re basically here to carve out new paths, to be the models for future generations. We’re tasked with telling our truth(s) as African women, and there’s not that many of us — it’s a short list.

Somi referred to Angelique Kidjo as a great inspiration, while Karoli mentioned Lady JayDee and Omar mentioned legends like Bi. Kidude and Siti Binti Saad, for whom her band is named.

Siti Binti Saad, Zanzibar's original Taarab singer (1880-1950) from the village of Fumba, trailblazed as the first woman in East Africa ever to record her music in Swahili, recording over 150 gramophone records in India. She was known to perform on stage wearing a black veil over her head as was the custom for Muslim women along the Swahili Coast. In a world dominated by men, Saad insisted on a musical path and was known to protest violence against women through her music.

At February 10’s show, Omar channeled the spirit of Siti Binti Saad when she introduced her song with a powerful message directed mainly at men:

This next song is my story. And I say, a woman is your wife, is your mother, is your sister. Why beat your woman? She should be respected. She needs respect!