‘We Want the World to Know': Activists Reporting on Occupation Face Legal Threats in Western Sahara 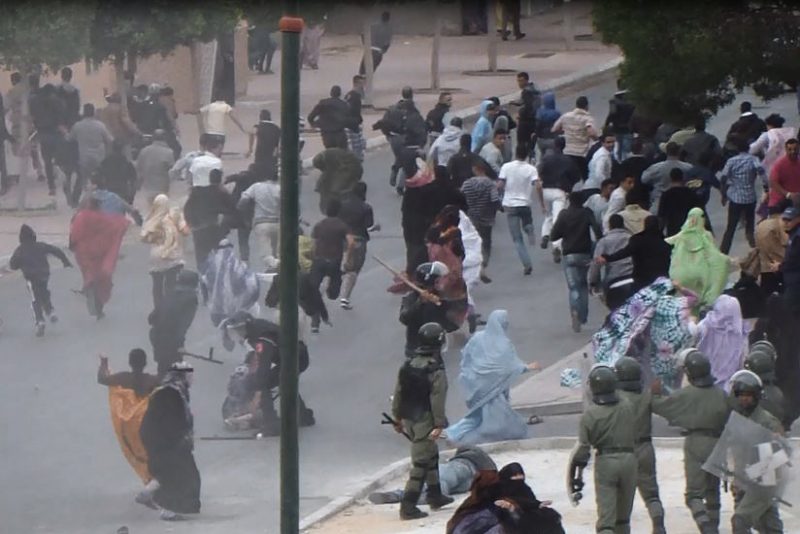 A crowd en route to join a rally in the city of Laayune is charged by Moroccan forces. The scene was captured by Equipe Media on April 29th 2013.

Among media freedom and human rights groups, Morocco is often described as having a relatively favourable landscape for media freedom, in contrast to other oppressive regimes and dictatorships in the neighbourhood, such as Egypt and Mauritania.

These assessments, which are already subjective, do not extend to the occupied territories of Western Sahara.

In a militarized environment with aggressive controls on media and citizen reporting, few stories of Western Sahara reach audiences beyond the immediate region. Local journalists and media activists reporting on the occupation and Moroccan abuses face legal obstacles and risk lengthy jail sentences in order to make their voices heard.

One group that has found itself on the edge of this divide is Equipe Media, a video documentation and human rights group that mainly reports on rights abuses committed by Moroccan forces in the territory.

Along with a Swedish film production collective, the Sahrawi media group recently released its first documentary film, 3 Stolen Cameras, which addresses the group’s struggle to document and report on Moroccan violations in Western Sahara.

“Our mission insists on showing that we are peaceful,” says Equipe Media co-founder Ahmed Ettanji. “We are campaigning our cause without violence and we want the world to know.”

Multiple Sahrawi journalists who worked with Equipe Media are currently behind bars because of their work activities, including video coverage of the 2010 Gdeim Izik protest movement.

The conflict in Western Sahara dates back to 1975 when the former colonial power Spain withdrew from the sparsely-populated territory and joint forces from neighbouring Mauritania and Morocco moved in to take control. While Mauritania eventually withdrew from Western Sahara, Moroccan forces to date still control what is sometimes referred to as ‘’Africa’s last colony’’.

For 16 years, the rebel group known as the Polisario Front fought a guerilla war for independence against Morocco, before a UN brokered ceasefire came into effect in 1991. The UN recognizes the Polisario Front as a legitimate representative of the Sahrawi people, a mixed ethnic group that lives mainly in Western Sahara and Mauritania.

In late 2010, just weeks before the Arab uprisings swept across the region, Western Sahara saw a massive, largely peaceful civilian uprising against the occupation. The uprising became known as Gdeim Izik, named after the area of the desert where the protest took place.

Thousands of Sahrawis abandoned their homes to join what grew into a huge self-governed tent city, squatting on the land for almost a month before being violently dispersed by Moroccan forces, who then burned the tent city to the ground.

Although largely unknown to the world, Gdeim Izik is an important milestone in the modern history of Western Sahara that rejuvenated the civilian independence movement.

Riots ensued after the evacuation of Gdeim Izik and resulted in several deaths and injuries that the opposing sides still blame each other for. The official narrative from Moroccan authorities holds that two protesters and 11 police and security people were killed on duty. Other sources give different numbers and different identifications.

A report by Sahara Docs cast greater light on the consequences of the event for the protesters:

[The eviction of Gdeim Izik] caused for hundreds of victims among protesters, and some deaths among Moroccan ranks; eleven of them according to Moroccan sources. Some died on the field, while some others did so in hospitals, but as a consequence of their wounds.

Equipe Media made it their mission to document the movement, as there were few other people doing so. Alongside a small network of grassroots media activists, they are paying a heavy price as a result.

Four media activists — Hassana Alia, Bachir El Khadaa, Hassan El Dah, and Abdullahi Lakfawani — affiliated with Equipe Media and similar networks of grassroots journalism are among a group of 25 Sahrawi activists who were prosecuted for their roles in the Gdeim Izik protest movement.

Lakfawani, who was arrested on 12 November 2010, was sentenced to life in prison after he was found guilty of “membership in a criminal gang” and “violence against a security force member leading to death, with intent.”

“Criminal gang” is a common terminology used by Moroccan authorities to describe activist groups in the region.

Hassana Alia member of Equipe Media was tried and convicted in absentia in 2013 on unspecified charges, and sentenced to life in prison. He is currently exiled to Spain where he was granted asylum before the trial. Alia did not appear among the defendants in the 2017 re-trial.

When our members are put on trial we are never charged with violating the press code, but always some made-up accusations of us assaulting the police or something like that. Foreign journalists are kicked out, Moroccan journalists know the law and keep their mouths shut and us Sahrawis are treated in the worst way possible.

Moroccan authorities accuse 25 activists of the Gdeim Izik protest movement of committing acts of violence in relation to clashes that erupted when Moroccan security forces dismantled the protest-camp on 8 November 2010.

Eleven Moroccan security officers and two Sahrawis died in those clashes, according to official sources. However, Human Rights Watch, Amnesty International and international observers say the trial is unfair due to forced confessions obtained through torture. Moroccan authorities have not heeded calls from rights groups to investigate these allegations of torture. In March 2013, after more than two years of pre-trial detention, a military court sentenced the activists to jail terms ranging from two years to life imprisonment.

In 2016, after Morocco changed its military justice law to end military trial of civilians, the cassation court ordered a retrial before a civilian court. On 19 July 2017, a court of appeal released a verdict, upholding most of the sentences previously pronounced by the military court of Rabat.

Another Equipe Media contributor also currently in jail, although not in relation to the Gdeim Izik protest, is Mohammed El Bambari, who is currently serving a six-year jail term in relation to his coverage of protests that turned violent in the city of Dakhla in September 2011.

The Moroccan government accuses him of participating in the violence on a number of charges including “committing violence against public servants,” “obstructing a public road,” and the “formation of a criminal gang.” Although the events for which Bambari is accused took place in 2011, he was not arrested until August 2015 when he appeared at local police station in Dakhla to renew his identification card.

If you can't challenge ‘territorial integrity’, how can you do journalism?

Morocco's 2016 Press Code criminalizes any expression that might challenge the “territorial integrity” of the kingdom. Print media accused of undermining Morocco's “territorial integrity” can face suspension while news websites can be blocked in accordance with Articles 71 and 104 of the Press Code. Any discussion or investigation related to the subject, and any independent journalistic activities carried out in Western Sahara, are thus violations that can garner a prison sentence ranging from six months to two years in jail and a fine, under penal code amendments from 2016.

But in this context, where any media coverage that challenges the “territorial integrity” of the Moroccan state is criminalized, the line between journalism and activism becomes blurred. To underground and activist media groups like Equipe Media, the cause for West Saharan self-determination and freedom of expression coalesce into one defiant and dangerous act of resistance.

While there has been a UN brokered ceasefire between Morocco and the Polisario Front in effect since 1991, the conflict is by no means settled. As the gravitational centre of West Saharan resistance started shifting away from the guerrilla fighters in the desert onto the Sahrawi civilian population in the occupied cities, an environment of underground media began to form.

International disinterest in the Sahrawi cause

Despite the efforts of groups like Equipe and other independent media workers, there is still very little international attention on the Western Sahara conflict. The silence also plays into the hands of the Moroccan propaganda, a narrative built around a national consensus that “Moroccan Sahara” is a non-issue.

“They push the image that there are no problems here,” says Ahmed. “Whenever resistance is brought to surface they say we are a minority of troublemakers, common criminals or foreign (Algerian) agents.”

When Gdeim Izik happened and news started finding its way out, Moroccan media immediately painted it as a protest over unemployment and economic hardships, making little if any reference to the military occupation. As the territory is exceedingly difficult for foreign journalists to visit and report from, foreign media often resort to reprinting what appears in the Moroccan press.

Ahmed is quick to underline that several governments in Europe, foremost the former colonial powers of Spain and France, are directly complicit and invested in the occupation.

What our group tries to do is to fix the spotlight on this place, the last remaining colony in Africa and we are simply asking to be free. But [Spain and France] continue to put economic interests ahead of our human rights. They just don’t care.