ISIS Has Left the Syrian City of Raqqa, but Its Landmines Continue to Maim and Kill 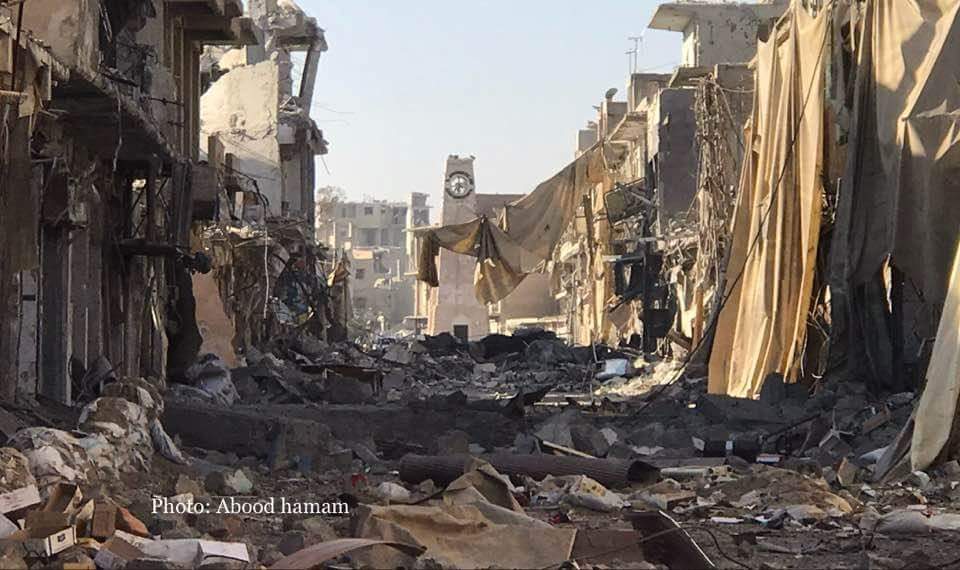 The destruction in Al-Qouatli street in Raqqa city. Photo by Abood Hamam, used with permission.

For nearly four years, between 2013 and 2017, Syria's Raqqa city remained under the control of one of the bloodiest jihadist groups of this century: ISIS, also known as ISIL, Daesh, and Islamic State.

During its reign, ISIS forced inhabitants of the city, which it had declared to be the capital of its “caliphate,” to follow its extreme rules. Those who disobeyed were killed by crucifixion or other brutal methods of public execution.

In October 2017, after a four-month-long battle, the Syrian Democratic Forces (SDF) — a US-backed alliance of Kurds, Arabs, Assyrians and other groups — managed to take control of the city and drive ISIS out. The retaking of Raqqa reportedly included an agreement between SDF and ISIS through which ISIS fighters and their families would be allowed safe passage to Deir Ezzor in Syria's east, according to the BBC.

But despite the group's defeat in Raqqa, ISIS wasn't finished with inflicting damage on the city's population. As one ISIS fighter told civilians before withdrawing from the city, “The land will fight for us”.

One of the ways “the land” is “fighting” for ISIS is through landmines.

Speaking to Global Voices over the phone, Abu Fares, a 53-year-old man who lost two of his sons to landmines planted by ISIS, said in a voice full of sorrow:

When the SDF and the international coalition attacked the city, we were forced to leave. However, we couldn't leave at the beginning of the fight, because ISIS used us as human shields. I lost one of my sons while we were trying to flee the city in the Shahdah district when a landmine exploded.

Read: ISIS Left Thousands of Mines in Manbij Before Fleeing. It Hid Them Inside Everything.

Abu Fares lost his second son a month after the battles were over:

A month after the battles ended we were allowed to return to our homes. I sent one of my sons to check our home near the clock roundabout, but when he arrived, the landmines were waiting for him in front of the house's door”.

A total of 220 civilian have been killed and dozens have been injured in Raqqa since the SDF victory due to mines planted by ISIS, according to a member of “Raqqa is Being Slaughtered Silently”, a group of local activists who document violations in the city. 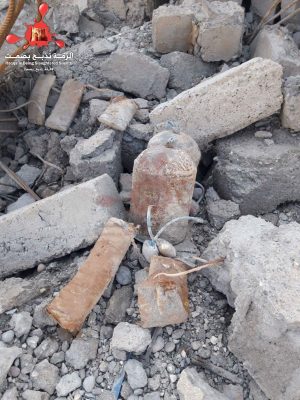 A landmine planted by ISIS in Raqqa. Photo taken by “Raqqa is being slaughtered silently.” Used with permission.

When operation “Wrath of Euphrates“, the codename for the anti-ISIS operation, started in November 2016, ISIS began to plant a large number of mines to prevent SDF forces from advancing towards Raqqa. But rather than hit their intended targets, these landmines often killed civilians fleeing the battles.

The explosive devices have also killed several SDF fighters, including British volunteer Oliver Hall who lost his life months ago while he was clearing the mines. As of the time of writing, the SDF has yet to announce the number of fighters killed due to these mines.

A voluntary organization called “Roj” (short for Rojava, a region in northern Syria and western Kurdistan) is working in the city on removing thousands of mines with the help of Raqqa's Civil Council and international organizations. “The number of unexploded ordnance in Raqqa is something that we never seen before”, UN assistant secretary general Panos Moumtzis told news agency Reuters in February 2018.

But that work isn't happening fast enough for some residents. Amira, 35 years old, told Global Voices that she had to pay 50,000 Syrian pounds (approximately 100 US dollars) to a private person to clear the mines in her house after the organizations working to clear them in the area rejected her request, saying that her neighborhood's turn hasn't come yet.

She said she had to return to Raqqa after initially fleeing because of the terrible living conditions in the camps in the north for internally displaced people:

ISIS planted mines everywhere, under beds, among the rubble, inside fridges and wash machines even inside an electric lamp experts found a mine.

According to residents, the Al-Tayar, Al-Mishlab and Al-Darriah neighborhoods were the only residential districts that have been completely cleared of landmines so far.

The process of de-mining in Raqqa is going very slow because of the lack of funds and resources available to the Civil Council. This situation is forcing civilians to return to their unsafe homes, causing regular casualties in a city that has already suffered under ISIS occupation for nearly four years.