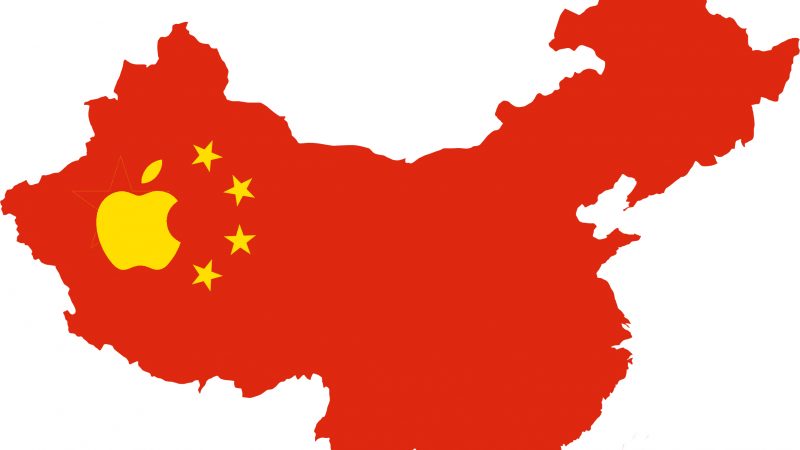 This article was written by Lo, Shih-hung, professor in the College of Social Sciences at National Chung Cheng University. It was originally published in Chinese by the online magazine Up Media on 26 January. The translation is published on Global Voices with the permission of the writer and Up Media.

The US-based global tech giant Apple Inc. is set to hand over the operation of its iCloud data center in mainland China to a local corporation called Guizhou-Cloud Big Data (GCBD) by February 28, 2018. When this transition happens, the local company will become responsible for handling the legal and financial relationship between Apple and China's iCloud users. After the transition takes place, the role of Apple will restricted to an investment of US one billion dollars, for the construction of a data center in Guiyang, and for providing technical support to the center, in the interest of preserving data security.

GCBD was established in November 2014 with a RMB 235 million yuan [approximately US$ 37.5 million] registered capital investment. It is a state enterprise solely owned by Guizhou Big Data Development and Management Bureau. The company is also supervised by Guizhou Board of Supervisors of State-owned Enterprises.

What will happen to Apple's Chinese customers once iCloud services are handed over to GCBD? In public statements, Apple has avoided acknowledging the political implications of the move:

This will allow us to continue to improve the speed and reliability of iCloud in China and comply with Chinese regulations.

Apple Inc. has not explained the real issue, which is that a state-owned big data company controlled by the Chinese government will have access to all the data of its iCloud service users in China. This will allow the capricious state apparatus to jump into the cloud and look into the data of Apple’s Chinese users.

Apple Inc. has not explained the real issue, which is that a state-owned big data company controlled by the Chinese government will have access to all the data of its iCloud service users in China.

Over the next few weeks, iCloud users in China will receive a notification from Apple, seeking their endorsement of the new service terms. These “iCloud (operated by GCBD) terms and conditions” have a newly added paragraph, which reads:

If you understand and agree, Apple and GCBD have the right to access your data stored on its servers. This includes permission sharing, exchange, and disclosure of all user data (including content) according to the application of the law.

In other words, once the agreement is signed, GCBD — a company solely owned by the state — would get a key that can access all iCloud user data in China, legally.

Why would a company that built its reputation on data security surrender to the Chinese government so easily?

I still remember how in February 2016, after the attack in San Bernardino, Apple CEO Tim Cook withstood pressure from the US Department of Justice to build an iPhone operating system that could circumvent security features and install it in the iPhone of the shooter. Cook even issued an open letter to defend the company’s decision.

Apple’s insistence on protecting user data won broad public support. At the same time, it was criticized by the Department of Justice, which retorted that the open letter “appears to be based on its concern for its business model and public brand marketing strategy.”

This comment has proven true today, because it is clear that the company is operating on a double standard in its Chinese business. We could even say that it is bullying the good actor while being terrified by the bad one.

Apple Inc. and Tim Cook, who had once stayed firm against the US government, suddenly have become soft in front of Chinese government. Faced with the unreasonable demand put forward by the Chinese authorities, Apple has not demonstrated a will to resist. On the contrary, it is giving people the impression that it will do whatever needed to please the authorities.

Near the end of 2017, Apple lnc. admitted it had removed 674 VPN apps from Chinese App Store. These apps are often used by netizens for circumventing the Great Firewall (blocking of overseas websites and content). Skype also vanished from the Chinese App Store. And Apple’s submission to the Chinese authorities’ requests generated a feeling of “betrayal” among Chinese users.

Some of my friends from mainland China have even decided to give up using Apple mobile phones and shifted to other mainland Chinese brands. Their decision, in addition to the price, is mainly in reaction to Apple’s decision to take down VPN apps from the Chinese Apple store.

Some of these VPN apps can still be downloaded from mobile phones that use the Android system. This indicates that Apple is not “forced” to comply. People suspect that it is proactively performing a “obedient” role.

The handover of China iCloud to GCBD is unquestionably a performance of submission and kowtow. Online, several people have quipped: “the Chinese government is asking for 50 cents, Apple gives her a dollar.”

Selling the iPhone in China

Apple says the handover is due to new regulations that cloud servers must be operated by local corporation. But this is unconvincing. China's Cybersecurity Law, which was implemented on June 1 2017, does demand that user information and data collected in mainland China be stored within the border. But it does not require that the data center be operated by a local corporation.

In other words, even according to Article 37 of the Cybersecurity Law, Apple does not need to hand over the operation of iCloud services to a local corporation, to say nothing of the fact that the operator is solely owned by the state. Though Apple may have to follow the “Chinese logic” or “unspoken rule”, the decision looks more like a strategic act, intended to insulate Apple from financial, legal and moral responsibility to their Chinese users, as stated in the new customer terms and conditions on the handover of operation. It only wants to continue making a profit by selling iPhone in China.

Many people have encountered similar difficulties when doing business in China — they have to follow the authorities’ demands. Some even think that it is inevitable and therefore reasonable. For example, Baidu’s CEO Robin Li said in a recent interview with Time Magazine, “That’s our way of doing business here”.

I can see where Apple is coming from. China is now the third largest market for the iPhone. While confronting vicious competition from local brands, the future growth of iPhone in China has been threatened. And unlike in the US, if Apple does not submit to China and comply with the Cybersecurity Law, the Chinese authorities can use other regulations and laws like the Encryption Law of the People’s Republic of China (drafting) and Measures for Security Assessment of Cross-border Data Transfer (drafting) to force Apple to yield.

However, as the world's biggest corporation in market value which has so many loyal fans, Apple’s performance in China is still disappointing. It has not even tried to resist. On the contrary, it has proactively assisted [Chinese authorities] in selling out its users’ private data.

Assisting in the making of a ‘Cloud Dictatorship’

This is perhaps the best result that China’s party-state apparatus could hope for. In recent years, China has come to see big data as a strategic resource for its diplomacy and for maintaining domestic stability. Big data is as important as military strength and ideological control. There is even a new political term “Data-in-Party-control” coming into use.

As an Apple fans, I lament the fact that Apple has become a key multinational corporation offering its support to the Chinese Communist Party’s engineering of a “Cloud Dictatorship”. It serves as a very bad role model: Now Apple that has kowtowed to the CCP, how long will other tech companies like Facebook, Google and Amazon be able to resist the pressure?