In Afghanistan, Governors Don't Just Step Down Because the President Asks Them To 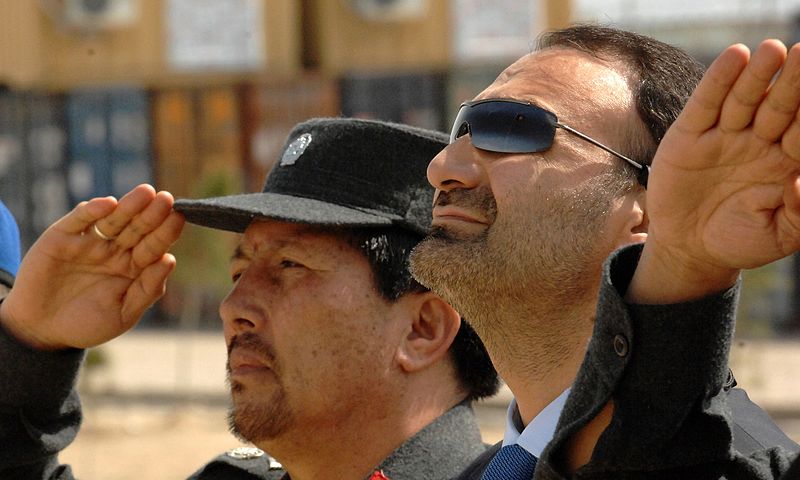 As Mohammad Daud begins his fiftieth day in office as governor of Afghanistan's Balkh region, he may wonder whether he will ever receive the keys from his predecessor.

President Ashraf Ghani officially announced Daud as a replacement for long-serving Ata Mohammad Noor on December 18, 2017, but the popular Noor did not feel like a job change.

For the past month, Balkh’s had 2 governors (3 if u count the Taliban shadow gov). One’s ruled the province like a king, now refusing to leave, trying to emerge larger in defying Ghani. His successor – ready in a 3-piece suit & dyed beard – cant get it inhttps://t.co/zbBJcl8PBN

In addition to refusing to step down from a position he has held for over 13 years, Noor ordered Daud's arrest on murder charges. Local authorities in Balkh seem more inclined to cooperate with the old governor than the new one, making it virtually impossible for Daud — presently working out of Kabul — to step foot in Balkh.

Noor has said the decision to sack him is “without legitimate basis” and attributes the move to Kabul's preparations for elections in 2019. Speaking to Reuters, he said:

This is about the 2019 presidential election. [Allies of Ghani] have no grassroots support among the people and they are afraid of public figures who do.

He also said he offered his resignation to Ghani months ago, but on several conditions — the appointment of key allies to top posts in government — which have not been met.

At the heart of the standoff is a rivalry between leaders of the two ethnic groups that dominate Afghan politics — Pashtuns and Tajiks.

Noor is a senior leader of the Tajik-dominated Jamiat Party, whose candidate Abdullah Abdullah lost a bitterly contested presidential election to Ghani, a Pashtun, in 2014.

Ever since this victory, Ghani and his allies have seemed on a mission to exploit the divisions in the Jamiat Party in order to break it up.

Noor, for instance, is no longer on speaking terms with the party's former nominee, Abdullah, who accepted the consolation prize of Chief Executive Officer after initially contesting the result of the 2014 vote.

Daoud, Balkh's de jure governor, is also an ethnic Tajik and a member of Jamiat, but one who owes his new position to Ghani, rather than the party.

Officially the Jamiat Party has spoken out against Noor's dismissal and accused Ghani of centralizing power. They also claim authorities are out to destabilize Balkh region, which has traditionally been one of Afghanistan's most politically stable, emerging as a northern economic hub during Noor's time in charge.

Nevertheless, the fact that so many Jamiat members are in the government has compromised its stance on the issue and weakened it as a potential opposition force.

Jamiat is 50% of the current govt, which means they are also 50% responsible towards everything. If they criticize the govt, they criticize their authority as well… Get this simple formula! Don’t spit in the wind…

Party interests aside Jamiat should also disdain from parallel power hubs, if they are visionary they should seek centralization of power otherwise tomorrow if a Jamiat member is elected as the president the same will repeat but in different parts of Afg.

These demands of Jamiat-I-Islami shows that talks will fail eventually and the president will be left with no option but to remove Atta Noor through the use of power.https://t.co/HlLgCtcLZg

It is believed that the Jamiat will agree to Noor's dismissal only if the party itself, rather than Ghani, is able to name his successor.The party also wishes to reform the constitution of Afghanistan, by holding traditional grand council (Loya Jirga).

Face-to-face talks between Jamiat and Ghani's office have yet to result in any breakthrough, however.

Afghanistan is heavily dependent on American civilian and military aid and Washington has intervened in a number of domestic political standoffs.

On January 16, the White House produced a readout of US Vice-President Mike Pence's phone conversation with Ghani, touching on the situation with Noor:

Vice President Pence and President Ghani discussed the political leadership in the Balkh province. The Vice President emphasized his support for the Afghan government to engage with Balkh Governor Atta and conduct a peacefully negotiated transition of leadership.

Afghan security analyst Bashir Bezhen pointed out that Pence’s legitimising reference to Noor as governor made it unlikely that Kabul would resort to force to dislodge him.

There was fear before the phone call that the government will resort to a military move to oust Atta, and his supporters would respond with force…Now that fear is gone.