Decades After US Immigration Policy Separated His Family, a Man Searches for His Ancestral Village in China 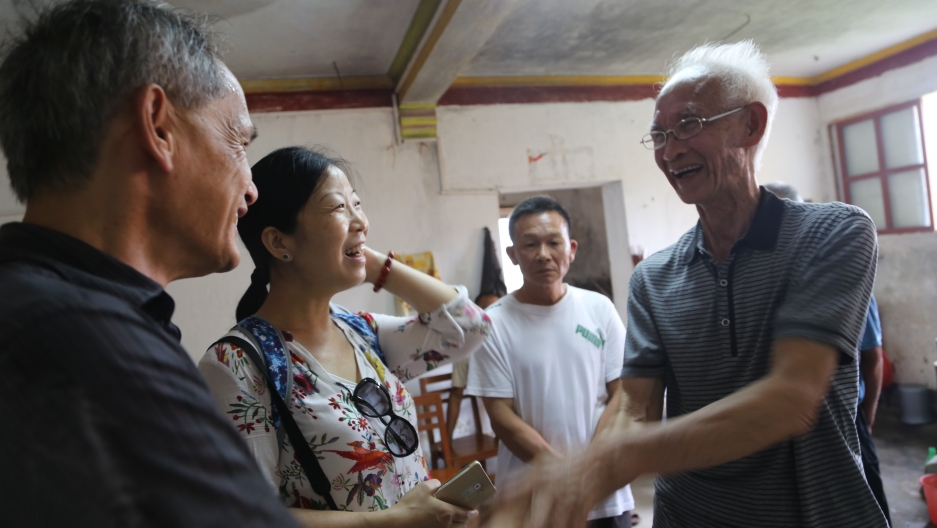 After a long search, 64-year-old Russell Low (left) visited his great-grandfather's ancestral home in Guangdong Province in southern China in May 2016. Low met village elders and learned that his grandfather's three younger brothers also ended up in the US, though no one knows what became of them. Credit: Courtesy of Russell Low

This story by Violet Law originally appeared on PRI.org on February 1, 2018. It is republished here as part of a partnership between PRI and Global Voices.

In May 2016, Russell Low crossed the Pacific from his home in San Diego, California, and trekked to two remote villages connected to his great grandparents’ families in southern China's Guangdong Province. For the 64-year-old Low, this was a quest that has lasted a quarter century.

Once in China, Low had no doubt he’d found a part of the family tree where he belongs.

“My whole life I was told I don’t look like other Chinese. But over there, everybody looks like me. This is where from I came from,” says Low about the visit to his ancestral home.

Low’s family was one of the tens of thousands torn apart by the United States’ nascent legislative push to restrict immigration more than a century ago. The Chinese Exclusion Act thwarted generations of Chinese from uniting with family in the US. Those who managed to enter the country through loopholes and illegal means scattered like sand.

As the Trump administration pushes to halt family-based immigration, what some conservatives refer to as chain migration, scholars and immigration experts say it’s important to remember how such policies can impact families for generations. Such restrictive rules, they say, harken back to the days of the Chinese Exclusion Act, which placed a moratorium on immigration from China and splintered immigrant families for generations.

“The history of human migration is the history of ‘chain migration,'” says Erika Lee, director of the Immigration History Research Center at the University of Minnesota. “Family members, friends, neighbors have followed each other to the same cities, regions and countries since humans started migrating. It's only been recently that the term has become a dirty word promoted by politicians with an agenda. Chinese immigrants did not have the opportunity to follow each other very easily during the exclusion era.”

President Donald Trump spoke out against family-based migration after an alleged subway attack late 2017 by a Bangladeshi immigrant who had arrived in the US years earlier to join his uncle and cousins. Trump latched on to the attack by criticizing the current policy that allows naturalized immigrants to sponsor family members into the US.

Lucy Salyer, an associate professor of history at the University of New Hampshire who has written extensively on the exclusion act, says back then it was the Chinese who were seen as a threat to national security. Chinese immigrants were also accused of stealing jobs from the native-born, grievances that were fueled by discriminatory attitudes.

“The group [being targeted] might shift, but you still have the same kind of rhetoric,” says Salyer. “There’s a continuation of the fear factor. We need to be aware how much race has shaped our immigration and citizenship policy.”

The exclusion act, in effect from 1882 to 1943, barred Chinese Americans from becoming citizens; most new immigrants from China were turned away.

The law also gave shape to the country’s modern-day immigration apparatus. The “return certificate,” issued to only those Chinese Americans deemed eligible for re-entry, was the precursor to the green card.

Later, the exclusion act was used as a model for the Immigration Act of 1895, which officially ushered in the gatekeeping regime. Exclusion became the norm and marked what some would call an about-face from the ethos that America embraces all immigrants.

The ban resulting from the exclusion act made it impossible for Low’s paternal great-grandfather, Hung Lai Wah, to send for his three other younger brothers after leaving China in the 1860s as a teenager for San Francisco to build the Transcontinental Railroad. Growing up, Low knew little about his family’s roots in southern China.

During his visit in 2016, Low stood inside the grey brick home where Hung grew up nearly 200 years ago. He bowed in front of the ancestral altar and clasped hands with a village elder, who told him, “You’re the first descendant who ever came back to the village.” 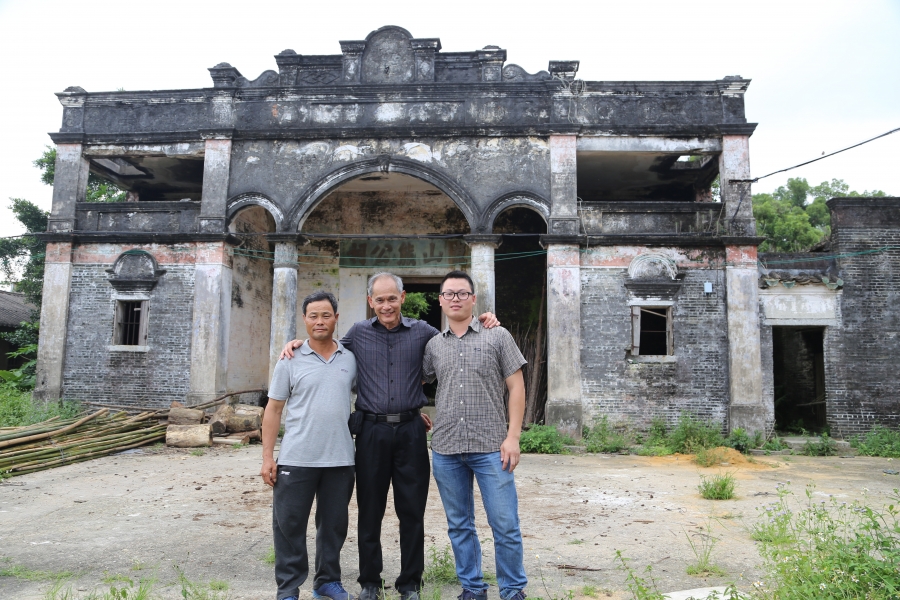 Only in the village did Low learn that Hung’s brothers also emigrated on their own efforts, though they were never heard from again.

“What happened to them? They had no idea,” says Low, reflecting on his lost great-granduncles. “This points to the separation created by the exclusion act.”

The exclusion act was finally revoked in 1943. The Immigration and Naturalization Act of 1965 ended the race-based quota and was hailed as a civil rights triumph; however, it proved short-lived.

“As drastic the [Trump’s] proposals are, they represent a continuing trend in immigration policy for the past 30 years,” says Lee. “Immigration policy still is and continues to be a very effective way to define who is worthy of being American, and who we want to keep out.”

Ironically, just as the Trump administration sets to wall off the border with Mexico, in recent years fewer immigrants have arrived from there than those who returned home.

Now, the largest increase in the ranks of new immigrants come from China, with about 40 percent gaining entry through family unification.

Advocates like Hong Mei Pang, of the San Francisco-based nonprofit Chinese for Affirmative Action, worry that an end to family-based immigration would hurt those her group serves the most.

To Pang, the current anti-immigration push echoes the same virulent veins of nativism that led to the exclusion act. In May 2017, Pang's organization led efforts in organizing local groups to form “No More Exclusion Coalition” to march in downtown San Francisco to commemorate the 150th anniversary of the passing of the exclusion act.

Meanwhile, the coalition is working to build a united front on immigration in the diverse Chinese community, which is made up of both new arrivals and Chinese Americans going back generations.

Even as a fourth-generation Chinese American, Low always felt the exclusion act's legacy on his family. In 2015, he sought out Sue Lee, former executive director of the Chinese Historical Society of America in San Francisco, for help in relocating his ancestral village — with only a 40-year-old photo of the village and its phonetic name.

“If we can get a better understanding of the early experiences of our ancestors, it enriches your own experience,” says Lee, who also traces her family roots to a nearby township. “We know we didn’t pop out of nowhere.”

Low’s efforts to search for his roots shows just how the rupture in the Chinese community and beyond can be surmounted.

“We can rally around our collective history,” says Pang. “Our goal is to build solidarity for all the communities that are systematically excluded.” 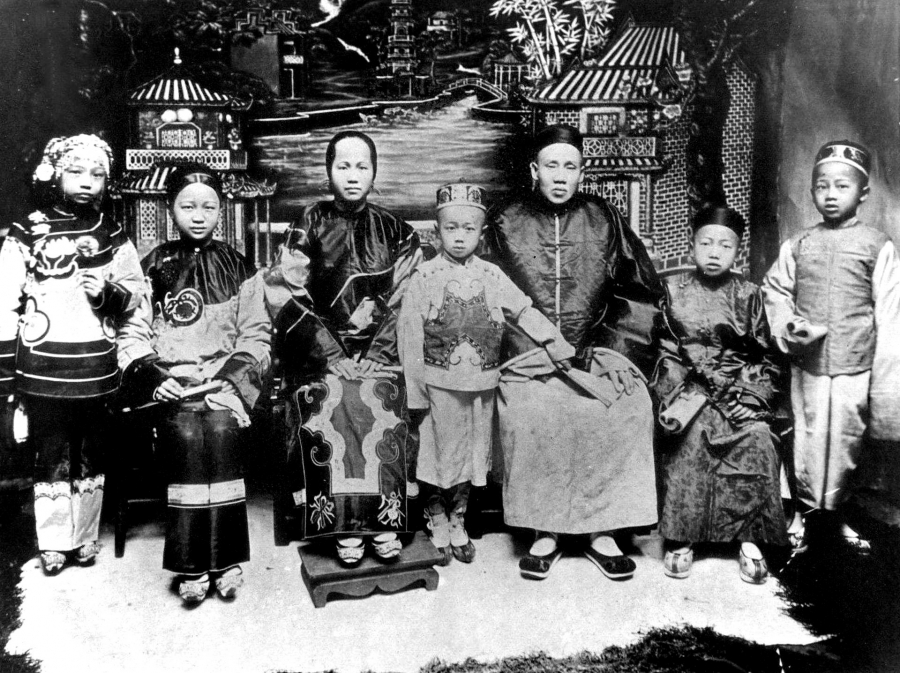 The family of Hung Lai Wah is pictured in San Francisco in 1903. Hung Lai Wah was one of the few men who found a wife and eventually married. Russell Low, a descendant of Hung Lai Wah, traced the family's roots to a village in southern China in 2016. Credit: Courtesy of Russell Low