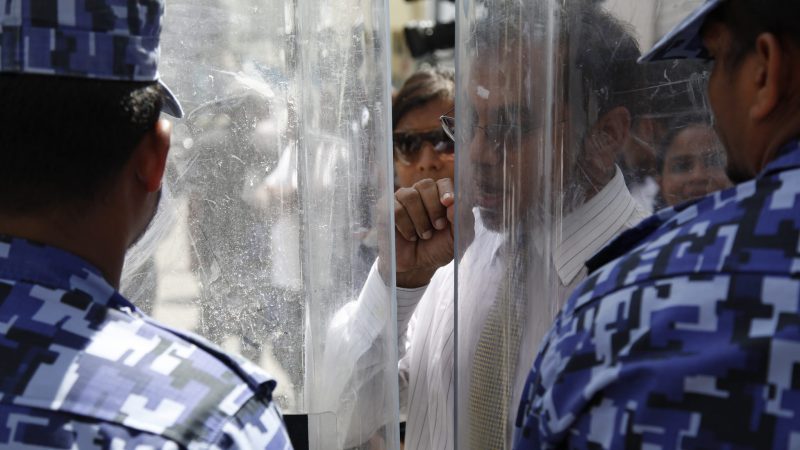 In July 2017, Police officers and soldiers in riot gear forcibly dragged out opposition lawmakers from the parliament building. Image via Flickr User Dying Regime. CC BY 2.0

On Thursday, February 2, 2018, the Supreme Court of the Maldives ordered the immediate release of former president Mohamed Nasheed, former vice president Ahmed Adeeb and several other high profile opposition leaders, explaining that their trials had violated the constitution and international law. In addition, the court nullified an anti-defection ruling in which 12 legislators lost their parliamentary seats for defecting last July from the ruling party. The court has also ordered new trials for the accused opposition leaders, but the government appears to be stalling for time.

The situation is being called a judicial coup, as it may lead to the impeachment of the incumbent president, Abdulla Yameen Abdul Gayoom. Last year, a process of impeachment was stalled by the anti-defection ruling by the Supreme court restricting members of parliament from crossing the floor — so the number of Members of Parliament (MPs) required for impeachment was not available. These recent events are the latest in the political roller coaster the Maldives has witnessed in the last few years.

Global Voices talked to an activist in Malé who discussed this alleged judicial coup in a private update. (The activist's name and the link to the restricted social media statement have been withheld for safety reasons):

It is four hours past midnight in the Maldives, and here in Malé, the capital city, the sound of police sirens are heard in the distance as another coup is unfolding. It is a judicial coup this time; the country’s Supreme Court has ruled tonight to release all high-level political prisoners and that no parliamentarian would lose the seat for switching her or his political party. Ironically it is the same Supreme Court which had ruled a couple of months ago that parliamentarians would lose seats for floor crossing and kept the status of some 12 MPs in limbo when they tried to defect from the ruling party to the opposition. That ruling was a lifeline for the increasingly sidelined autocratic president Yameen Abdul Gayoom. It is also the same Supreme Court which had meddled in the presidential election of 2013, paving the way for Yameen to come to power in the first place. While some of the opposition supporters have hailed the Supreme Court judges as heroes tonight, it must be remembered that their actions are significant in the slide of Maldives back to a dictatorship. They have been known to take over new powers and authority which were never granted to them by the constitution and to encroach on the powers of the parliament to the extent that the Supreme Court had morphed into a lawmaking body.

Meanwhile, the prisoners still have not been released, and the Maldivian government is claiming that the top court document needs to be validated before it can implement the court's orders. Ibrahim Hussain Shihab, the international spokesperson for President Abdulla Yameen, said that the government would “engage, and consult with, the Supreme Court in order to comply with the ruling in line with proper procedure and the rule of law.”

Refusal to enforce the Supreme Court's recent orders,only portrays of how much @PresidentYAG disrespects and disregards the constitution and the rule of law. The whole world is watching of what a failed leader you are !#SupremeCourtAmuru @USAmbKeshap @UKinMaldives @CanHCSriLanka pic.twitter.com/VOVmjzjIwo

Ex-president Mohamed Nasheed supported the view of the Supreme Court:

Welcome tonight’s SC ruling calling for the immediate release of political prisoners and the restoration of their civil and political rights. President Yameen must abide by this ruling and resign. Urge all citizens to avoid confrontation and engage in peaceful political activity.

Some members of the international community also welcomed the decision. Imthiyaz Fahmy appreciated the sentiments expressed in a tweet by the United States’ ambassador to the Maldives:

Thank you Ambassador for all your support throughout to the people of #Maldives ? https://t.co/gZU3Nxj17Q

Soon after the verdict was published online, hundreds of people gathered at the opposition Maldivian Democratic Party (MDP) headquarters to celebrate. Police officers at the scene fired tear gas to disperse the crowd and arrested a number of people.

The Maldives transitioned from an autocracy to a democracy in 2008, but experienced political instability after its first democratically elected president, Mohamed Nasheed, was forced out in an alleged “coup” in 2012. President Abdulla Yameen won the controversial presidential election in 2013. The country is once again tilting toward authoritarianism as growing accusations mount against President Yameen for silencing dissent and imprisoning political opponents — including Nasheed — under allegedly made-up charges.

The Maldives United Opposition (MUO), a coalition of opposition parties led by exiled leader Mohamed Nasheed, is demanding the removal of President Abdulla Yameen Abdul Gayoom through legal means and trying him for money laundering and other charges.

In September 2016, “Stealing Paradise,” an investigative exposé by Al Jazeera, revealed how President Yameen and his associates embezzled millions of dollars, bribed judges and other high-level officials, and used influence to remove government workers who stood in their way.

To further complicate matters, Police Commissioner Ahmed Areef was relieved from his duty and Deputy Commissioner Ahmed Saudhee replaced him. Apparently, the police chief's removal came after the Maldivian police, in a tweet, gave assurances that it would abide by the court order and said that it had started the process to release the political prisoners.

Woah. Maldives Attorney General announces the firing of the police chief. Maldives police had tweeted that they would enforce the Supreme Court ruling.

In examining the impasse, the Malé-based activist did not let either side of the political divide off the hook:

As the coup unfolds, on one side stands the solitary figure of the incumbent president Yameen, while on the other side is the opposition coalition in which there are so many politicians who must be held responsible for destroying the fabric of Maldivian society in recent years. At times political foes and at times friends, they have orchestrated coups, looted the treasury and made local politics dirtier. As for Yameen, the lesson he had learned from Machiavelli’s The Prince seems to be to become a leader who is feared rather than a leader who is loved. In his four years in power, he has reduced independent institutions to mere puppets, imprisoned all political opponents, introduced laws to block independent media and unbiased reporting, and consolidated his power with the assistance of the judiciary. He kept China close, upsetting India and the United States. Recently his government signed a free trade agreement with China, which has been criticised by the former president Mohamed Nasheed’s party as inviting China to grab lands in the Maldives. Ironically it was with the assistance of Nasheed’s party MDP that the government was able to pass the laws which facilitate such land grabs.

Yameen also ventured into a taboo territory recently when he cracked down on some tourist resorts, sending police and customs officials to search the resorts and confiscate the liquor there. While he ordered this as a crackdown against a tycoon who happens to be one of his political opponents, this move must have unnerved the influential businessmen in the tourism industry […] it is those tycoons who wield the real power in the Maldives and any threat to their resorts or their businesses is bound to have repercussions.

[…] Yameen is playing his last card by unleashing the police on opposition protesters, spraying them with tear gas and brutally beating them. He has fired the Commissioner of Police and is attempting to delay the enforcement of the Supreme Court’s rulings while he is looking for options to either arrest the Supreme Court judges or to replace them.

On February 2, the Maldivian police tweeted a press statement, which it seems will buy the president some time:

Rough translation: The police service is trying to implement the Supreme Court's court order after consulting with the Attorney General and the Prosecutor General, and after following due process.

It remains to be seen how this court ruling will affect the Maldives’ political prospects. The opening of the parliament for this year on February 5, 2018 has been indefinitely postponed citing security reasons. Azim Zahir, a Ph.D. student, tweeted:

What matters less is deciding whether Maldivian SC order is legitimate or not. The system as a whole suffers from a legitimacy crisis. What matters more is how that order & joining of different forces as an opposition to the regime open up or foreclose democratic possibilities.

With the loss of political legitimacy by abrogating democratic rules n norms, loss of coalition support, the parliament majority, and Supreme Court support for Pres Yameen, his gov effectively rules as a military-police state through sections of the security apparatus.