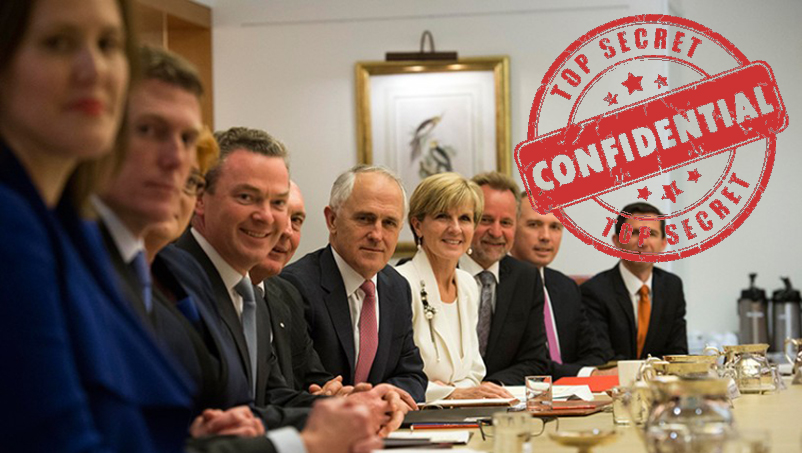 As the cliché goes, you couldn't make this stuff up. Classified documents from five Australian administrations covering nearly 10 years were accidentally sold in two locked filing cabinets at a second-hand furniture shop. Most were either “top secret” or “AUSTEO” (Australian Eyes Only).

The Australian Broadcasting Corporation (ABC) obtained them and published some of their contents online, but withholding others for national security reasons. The Australian Security and Intelligence Agency (ASIO) have since taken custody of the original files following an agreement between the Department of Prime Minister and Cabinet and the ABC. The agreement protects the identity of the source who bought the filing cabinets.

Many on social media have been bemused by this bizarre breach of security:

I can't help but laugh at the incompetence of the Australian Government. It's like something out of a sitcom. #cabinetfiles #auspol

Can a journalist check if there's been a rush on the purchase of ex-government filing cabinets in Canberra over the last few hours – particularly by foreign nationals… https://t.co/9eAM1ve1j2 #auspol

Are you kidding me? All these cabinet leaks came from an actual filing cabinet sold at a government auction. What's the point of draconian security laws when you're giving the stuff away?https://t.co/IOCkdo5iQu

The files didn't only spark jokes. Former Prime Minister Kevin Rudd is suing the ABC over its reporting of one of the documents which warned of “critical risks” concerning a contentious home insulation scheme during the global financial crisis in 2009. Four young installers working as part of that scheme died in separate incidents from electrocution and hyperthermia. Rudd claims that the document was referring to financial issues, not safety.

Rudd’s legal action has brought its fair share of criticism:

Now @MrKRudd is suing @abcnews over the reporting of #CabinetLeak. By the sounds of it, just because he doesn't like the fact this info became public. Having a hissy fit. https://t.co/hgsl4wwVL4

A second sensitive document concerns an audit of the Australian Federal Police (AFP) revealing that the agency had apparently lost 400 files from the Cabinet’s National Security Committee (NSC) between 2008 and 2013. The AFP responded publicly, saying that the document was outdated and that the final number of files that remained unaccounted for was 33.

None of their missing files was in the ABC haul. “These documents have been destroyed, but there is no official record to indicate that this destruction occurred,” the agency said in a press release.

My favourite part about the cabinet files lost in the second-hand filing cabinet is that one of them is about other lost cabinet files.

‘The gravity of this scenario cannot be overstated.’

The gravity of this scenario cannot be overstated. These are some of the most secret documents that the Australian government creates, usually locked up for 20 years before being released to the public due to their sensitively and to put a bit of time between the actors and their actions, yet here they were, up for sale in suburban Canberra.

Noely joined a chorus on Twitter of those worried about the security of data that the government collects from its citizens:

So have I got this right?

Both the Government and AFP want to hoover up all our data whenever they wish, without any proper oversight, but they can't even keep their own shit secure?#WeAreDoomed#CabinetFiles https://t.co/ZSRp031AOy

Concerns have also emerged about whether Australia's allies can trust the country's ability to keep a secret. Defence Connect, a defence industry information site, pointed out:

The ABC has said one file contained highly classified documents that revealed insights into the National Security Committee, which is charged with decisions related to intelligence and security.

When pressed by media in Adelaide, Defence Industry Minister Christopher Pyne refused to comment on what the revelations will mean for Australia's relationships with key allies.

Cabinet government requires confidentiality. Ministers have to be able to discuss alternative options to solve the problems they must manage. They have to able to express opinions and probe proposals.

Despite these attempts at thoughtful analysis, humour has continued to dominate online responses:

The Federal Cabinet met earlier today to discuss classified document security policy. The Prime Minister later said the outcome was secret and then sprayed water on reporters from the fake flower in his lapel.#CabinetFiles #auspol #Canberra pic.twitter.com/bxxlH1lPWx

However, Prime Minister Malcolm Turnbull is unlikely to joke about government leaks in future after his unintended second sight earlier in the week:

This is very awkward in hindsight. On Monday Australia's PM Malcolm Turnbull joked about the few cabinet docs the ABC had published as coming from “someone's bottom drawer” 🤔 pic.twitter.com/lPqvarkN40

The Department of Prime Minister and Cabinet has admitted that it was responsible for the loss of the files. In a media statement, the department secretary Martin Parkinson confessed:

This casts the Department in a poor light and this failure has implications for the rest of the Australian Public Service.

Meanwhile, the ABC has revealed the back story of how they came into possession of the files. It's a great tale in itself. A “bushie” now living in Canberra bought them at auction for $AU 10 (8 US dollars) each. (A bushie is someone who comes from a rural araa of Australia.) After his own research into the contents, he contacted Michael McKinnon, the ABC's freedom of information editor. In McKinnon's words, “This one was a cracker”.

Proving once again that everything is connected, it turns out that one of McKinnon's brothers is “a deputy secretary of the Department of Prime Minister and Cabinet who is currently in charge of national security for the Federal Government.”