This post written by Raisa Wickrematunge accompanied by photographs by Deshan Tennekoon, originally appeared on Groundviews, an award-winning citizen journalism website in Sri Lanka. An edited version is published below as part of a content-sharing agreement with Global Voices.

She strikes a pose for the camera; arms akimbo, looking determined, her gaze locked into the distance. Watching her, the group laughs and shouts words of encouragement. The atmosphere is light and supportive. Yet, just five minutes later, one of the girls being photographed talks about the anxiety she feels whenever she posts photos of herself online.

I feel like everyone’s watching everything you’re doing. Even what you wear… it sends a message. It just adds to my anxiety.

Groundviews interviewed a group of Sri Lankan women, including marketing executive Deshani Dharmadasa, who have been targeted online, often through vicious commentary on their appearance.

The term “cyber-harassment” has varied definitions. The European Institute of Gender Equality steers clear of defining it noting that there are no accepted definitions they can point to. Recent surveys by Pew Research Center found that Americans were often divided over what constitutes online harassment — be it the public sharing of private messages or sending unkind messages.

However, while speaking to the group a little further, another commonality emerges – each person has found their own way to cope and, when possible, push back against the hate they have received. Some use humour, others use direct confrontation. Dharmadasa, for instance, periodically posts screenshots of the unsolicited comments she receives on Facebook and Instagram – even with privacy settings enabled, she says she receives an average of 1 to 3 messages a week. Taking care to obscure their identities when posting, she often follows up by messaging them privately to take them to task for their behavior.

I often tell them I have a brother and I would be ashamed if he treated and spoke about women the way they do. I want to try and make them think about the comments they post.

Dharmadasa has never once received a response to the messages she sends. 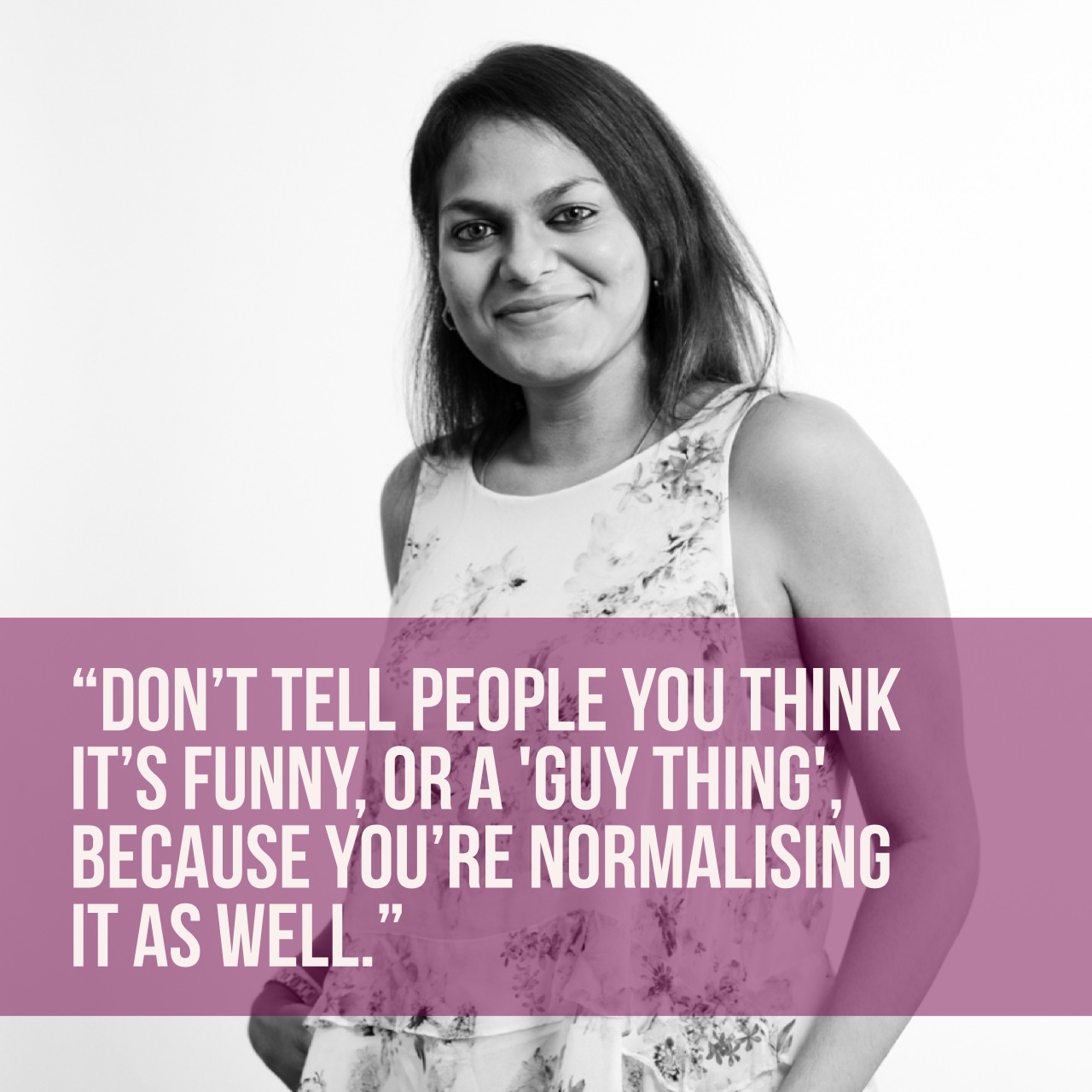 Image by Deshan Tennekoon. Via Groundviews

However, Dharmadasa is honest about her own complicity; in the past, she used to laugh off these comments for fear of being branded humourless or bossy:

“Don’t make the same mistake I did. Don’t stay silent,” she says.

At the 2017 Lanka Comic Con event, young female cosplayers found themselves ridiculed and body-shamed, with photos from the event even used to make mocking memes that went viral. For the women and girls who participated in cosplay, the pushback came as a complete shock.

Amaya Suriyapperuma initially didn’t know about the memes – her friends tried to hide it from her, as it was her birthday. However, she was taken aback by the viciousness when she did see them. Amaya had chosen to cosplay as Wonder Woman – many of them had said she was ‘too skinny’. 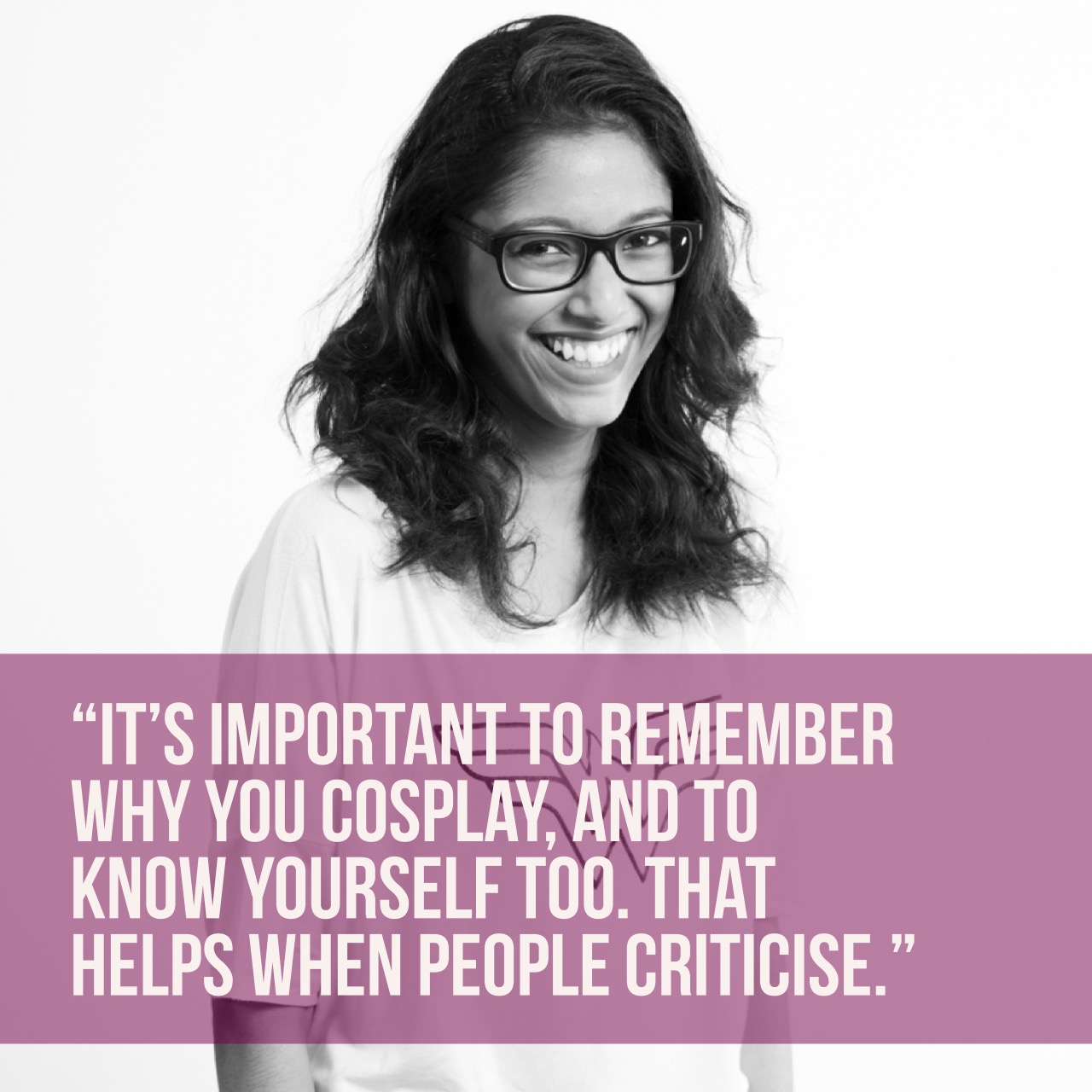 As a psychology student, Amaya found herself trying to analyse the meaning behind these comments:

“My first question was, ‘Why would anyone want to do this?’ It could be a lack of self-esteem. Maybe they don’t have a platform to express themselves.”

In addition, Amaya pointed out, cosplaying was relatively new to Sri Lanka.

In the aftermath, Amaya found herself unexpectedly placed on a pedestal. Members of the Geek Club of Sri Lanka (who are also the organisers of the Lanka Comic Con event) banded together and reported some of the Facebook pages. One person tweeted a photo of her, tagging the Director of the Wonder Woman movie, Patty Jenkins, and actress Gal Gadot, who played Wonder Woman. Both retweeted the photos and expressed their support.

For Amaya, this was overwhelming; some people then said she “thought she was Wonder Woman” and was just looking for her 15 minutes of fame. She began wondering if she really deserved the outpouring of support. A college class dealing with degrading memes was unexpectedly distressing.

I suddenly realised… hey, this happened to me.

Ultimately, Amaya reminded herself of why she enjoyed cosplay.

It’s important to remember why you did it, and to know yourself too. That helps a lot when people criticise.

Amaya had chosen to cosplay as a method of coping with ongoing struggles with anxiety and depression, while also paying tribute to her favourite characters. The comments and memes ended up building her resilience, she says.

She has another message too:

If you have anything to say that could cause harm to others, to their mental health or self esteem…don’t say it!

Shamindri De Sayrah, a writer who cosplayed as Supergirl, was also targeted at the same time as Amaya, with many commenters body-shaming her. After Gal Gadot’s supportive tweet, many avoided attacking Amaya, but distressingly, continued to go after the other cosplayers at the event.

Shamindri said she was outraged when she saw the first memes targeting Amaya:

I couldn’t help but wonder, what’s to stop them from targeting me as well? We cosplayed our favourite characters because we love them. If you look in the mirror and think, ‘I’m beautiful, and I like the way I look,’ nothing the bullies say can ever get to you. 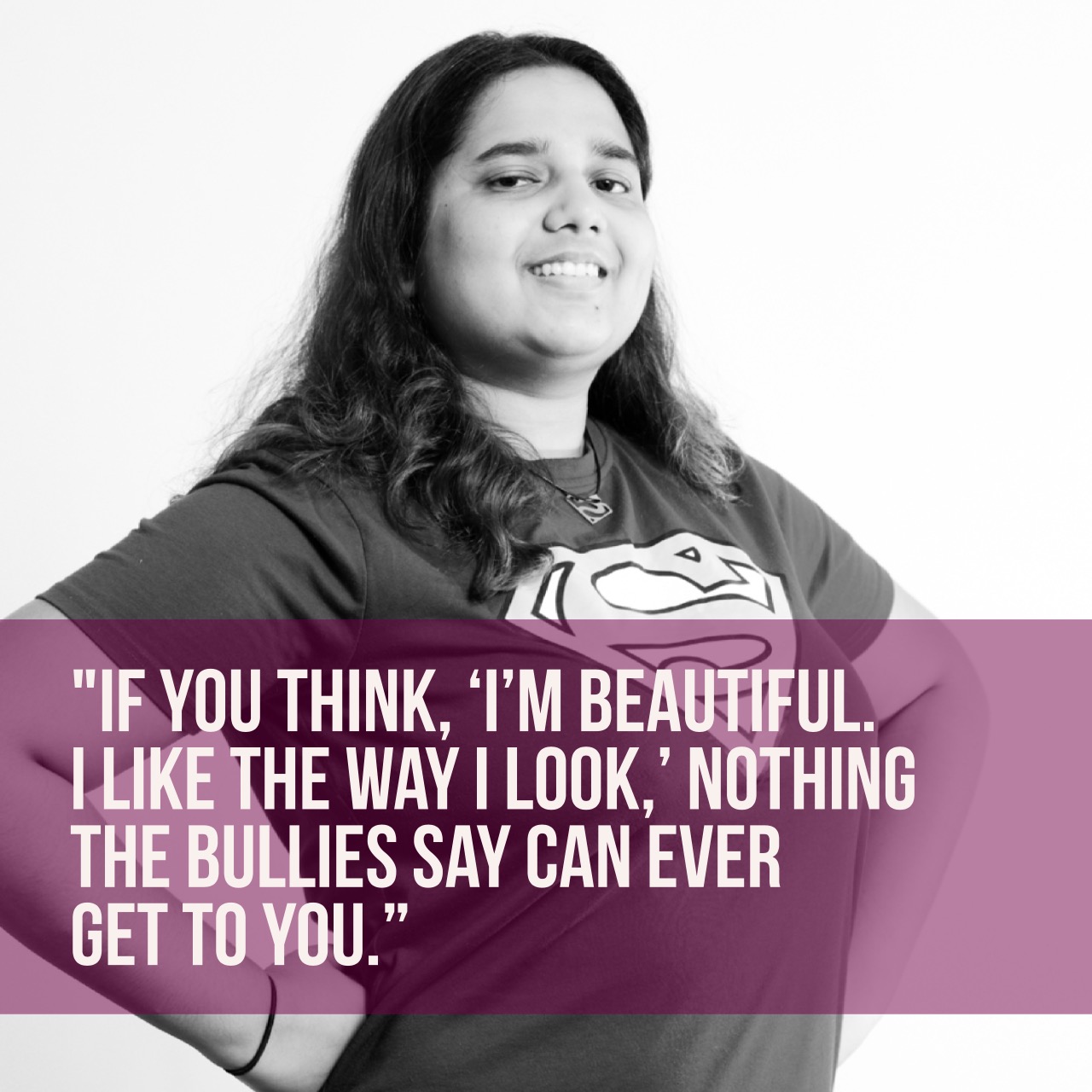 Image by Deshan Tennekoon, via GroundViews.

Law student Humaiza Thassim also cosplayed as Supergirl. She found out her photos were being shared while at the second day of Comic Con. Unaware of the comments, she was wearing a costume on that day too. Humaiza spoke of her humiliation on discovering that her photos had been shared and mocked online, entirely without her knowledge. 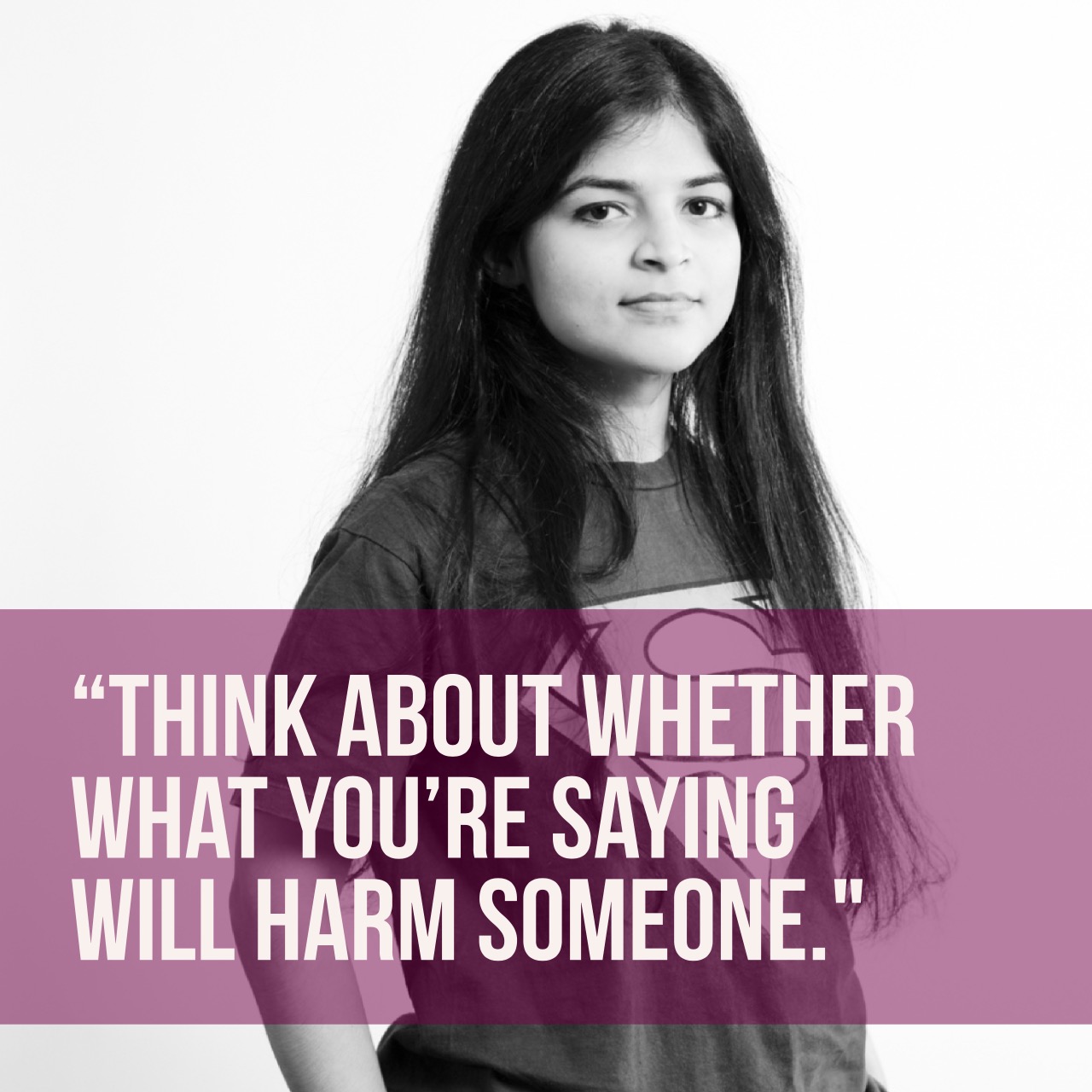 As a Muslim woman, Humaiza also received additional criticism, with many members of the Muslim community telling her she was being “un-Islamic”.

“Just because we have a fundamental right to freedom of expression doesn’t mean you can just say whatever you want. Just think about whether what you’re saying will harm that person, and whether you even know this person. That applies not just to cyber-bullying but offline as well.”

Artist Vicky Shahjahan faces a different kind of harassment to the rest of the group. Identifying as androgynous, Vicky initially faced push back from the conservative community of Slave Island, who had never met or interacted with an androgynous person before. 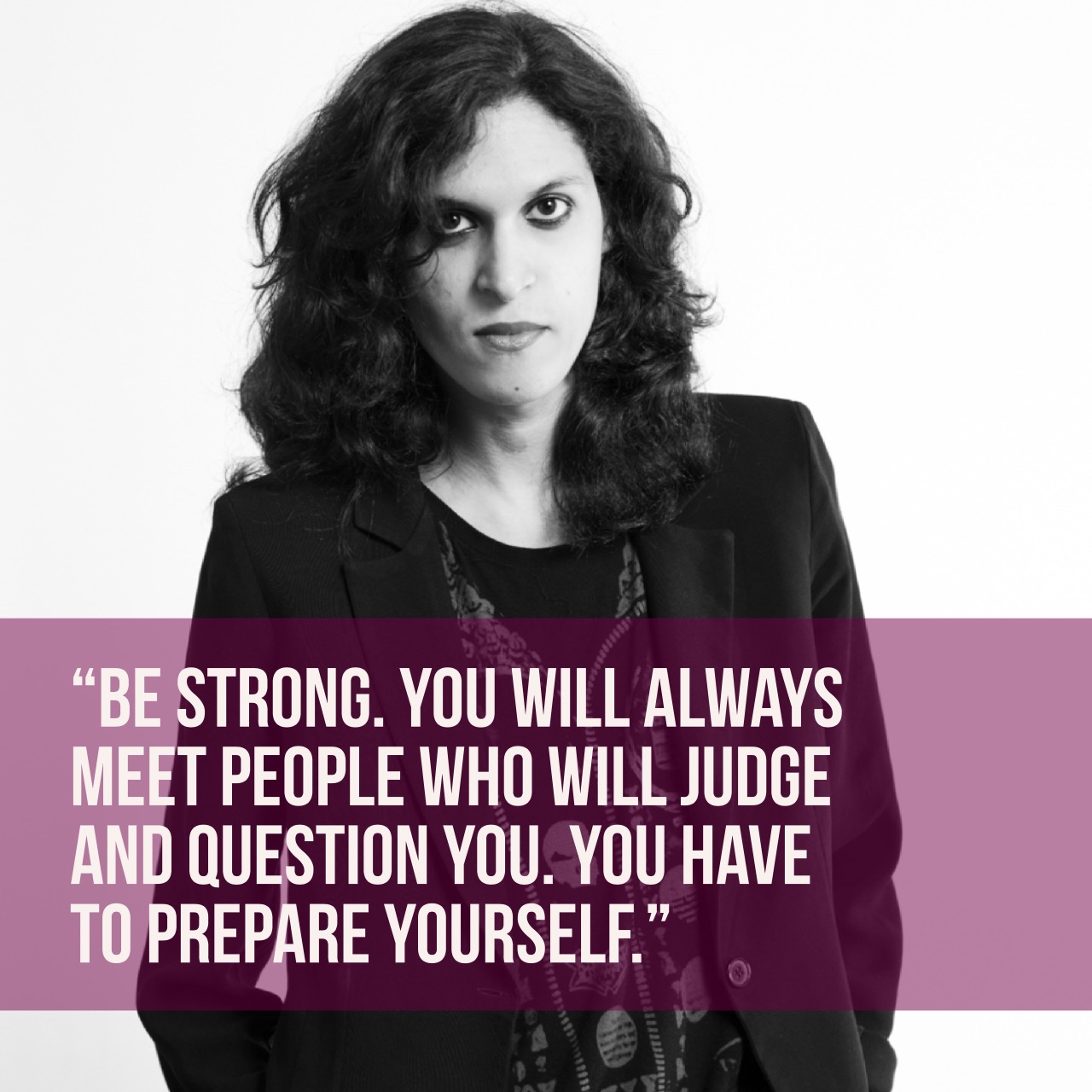 Many members of the community felt that Vicky’s expression of gender identity was a sure sign of promiscuity. Any interaction with male or female friends was seen as proof cementing this. However, Vicky responded humourously to this commentary. Through sustained interaction, especially through art, Vicky was able to change these perceptions. Although the hate continues, neighbours and community members now stand up for Vicky more often.

This is not to say that Vicky doesn’t encounter the same hate online. The use of gendered terms as insults is something Vicky feels strongly about and often speaks out on.

To those who might be struggling with the expression of their gender identity, Vicky encourages them to be strong.

Wherever you go, you will meet people who will judge you and question you… You have to prepare yourself.

The calls for resilience reflect a much deeper problem – the lack of proper avenues for redress, when harmful comments, images or videos are posted online without consent. As Amaya pointed out, the cosplayers were lucky as they had the support of the Geek Club of Sri Lanka, who banded together to mass report pages, and provide moral support. An ordinary woman or girl whose photo was shared without consent would not have the same support system. What’s more, she would have limited opportunities for redress. Sri Lanka’s existing law on defamation doesn’t adequately cover social media, and the reporting bodies often don’t respond, or respond far too slowly to complaints.

Even Facebook’s reporting mechanism often doesn’t work, due to language constraints. For the cosplayers, it took the official event photographers reporting their images as being stolen for Facebook to take the offensive memes down – reporting the content itself didn’t work, as many of the memes were in Sinhalese, the most widely spoken language is Sri Lanka, which is written in a non-Latin script.

Amaya says at the end of our interview:

You have to fight for yourself. Sri Lanka’s law governing online harassment is not strong in any case, and it doesn’t cover social media, so there’s no point [in pursuing legal action].

“That’s sad,” she adds, trailing off.

These stories echo those of other women and girls whose photos are leaked online, or who are mocked. Often, they have to rely on their own resources and contacts in order to receive any kind of response or action. The issues facing the group discussed here chime with the research we are currently conducting on technology-based violence against women. These incidents are not isolated, but form a larger atmosphere of misogyny and sexism online, when talking to and about women in Sri Lanka.

If you would like to report an instance of cyber-bullying, please read this quick guide by Bakamoono for next steps.