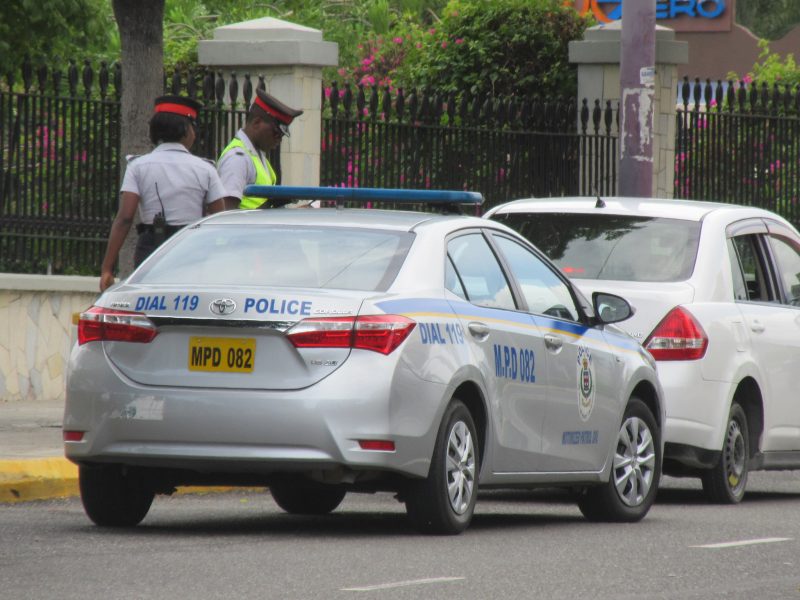 Officers from the Jamaica Constabulary Force (JCF) pull over a car. Photo by Jason Lawrence, CC BY 2.0.

Nearly two weeks after the Jamaican prime minister Andrew Holness announced a state of public emergency in the parish of St. James — which has now been extended until May 2, 2018 — the debate on the country's soaring crime rate continues to rage.

Only two murders have taken place in the parish since the state of emergency began, and government officials affirm that all is going smoothly. However, other parts of the island continue to struggle with rising murder rates, recording a 17% increase over January 2017.

Meanwhile, news broke that the current police commissioner will be taking pre-retirement leave effective February 1, 2018. Jamaica's 29th commissioner of police since the country's independence from Great Britain in 1962, Commissioner George Quallo took office just nine months ago. At the time, he was little known by the general public and expressed surprise at his appointment.

He had initially denied plans to leave the post earlier than his official retirement date in August 2018, but now that he has, the Police Services Commission (PSC) faces pressure to appoint a new commissioner. In the interim, Deputy Commissioner Clifford Blake is expected to act in the role. In a similar scenario, Quallo's predecessor Carl Williams resigned in early 2017 after just over two years in office.

One editorial cartoon showed Robert Montague, the Minister of National Security, on board a sinking Titanic that has hit a ‘crime iceberg’ while the commissioner swims away:

Next Commissioner. A general or a school principal?
1. Jamaica now finds itself buried deep in a violent-crime quagmire.
2. With Quallo out, who will be his replacement? Will it be an Adams style general or, will we opt for a professorial-style thinker and pacifier?
3. In any of the two options, the nation cannot afford another failed experiment. At some stage the people are going to respond politically and the Holness administration will be put under pressure to demit office.
4. And if that occurs and violent criminality continues under a PNP administration, what then?
5. The people of this country want IMMEDIATE RESULTS and nothing suggests that any action either way will get those results.
6. All eyes will be on the Police Service Commission as it prepares Jamaica for an uncertain future.

Wignall refers to retired Senior Superintendent of Police Reneto Adams, the controversial head of the long-disbanded Crime Management Unit (CMU). Adams was allegedly involved in a series of extrajudicial killings, including his acquittal in the murder of four citizens at a house in rural Jamaica in 2005. Since retiring in 2008, Adams has regularly expressed strong opinions on security issues in the media and has maintained a cult-like following.

The “bring back Adams” call is usually raised when crime rates spike. Back in the limelight, Adams said in an interview that he would need just six months to set criminals running for their lives.

One Twitter user was all for it, even changing his profile photo to one of Adams in full battle gear:

Let's see if Mr Holness will give the people who they want to fight crime. Mr Adams is the best hero for the job, been saying that years now.

However, many Jamaicans still see “hard policing” and “tough crimefighting” as the solution, as outlined in this letter to the editor:

1. Severe punishment. If you import illegal guns into Jamaica and you are caught, you should be put to death. Malaysia puts you to death for mere possession. Japan gives you life in prison for discharge.

Given our crime situation, what are the politicians waiting for?

2. A high probability that you will be caught. Drone surveillance, CCTV cameras, enormous (private sector-contributed) rewards for information leading to conviction, a robust, well-funded and efficient judicial system, and NIDS [National ID System]!

In the capital city of Montego Bay, large groups of citizens (mostly young men) have been detained during the state of emergency. Prime Minister Holness accompanied Public Defender Arlene Harrison Henry to address the detainees in person and expressed alarm at the detainees’ conditions.

Holness tweeted a plea for patience:

Yesterday I spoke to concerned relatives at the Barnett Street Police station where some of their loved ones were detained. I implored them to be patient with police who are not acting arbitrarily in detaining them & have a duty to follow due process before they can be released. pic.twitter.com/fetSchiF4M

St. James (population 185,000) has seen two shooting deaths since the operation began, one at the funeral of an alleged gang leader in the parish. Numerous arrests and several gun and ammunition seizures have also been made:

UPDATE: Police have seized 2 assault rifles and over 120 rounds of ammunition in Granville St. James. The parish remains under a State of Public Emergency. pic.twitter.com/vEeObNr00g

The type of weapons being found in St James demonstrates the type of fire power that murderers and criminals possess. We are appealing to the citizens of St James to help us in the fight to take back St James!! Together we are stronger. Call 837-8888

Jamaica's reputation on the line

Jamaica's tourism industry grapples with the ‘state of emergency’ while putting up a brave front as gang activity increases in areas such as Spanish Town, Linstead in St. Catherine, and the small community of August Town, near the University of the West Indies campus in Kingston.

Netizens have expressed frustration and bafflement as crime inexorably rises, and many no longer feel safe. Jamaican Clyde Williams tweets his hope for solutions-focused dialogue:

Respectfully, repeating stories about murder, mayhem & simply saying it has got to stop & railing with righteous indignation will not lead to an ease or reduction. If you speak of advocacy around our security issues & discussing solutions or coping mechanisms fine, I am on board.

The government has been communicating regularly about the situation in St. James and posting prompt responses to specific concerns on social media. Holness's high-profile visit to Montego Bay was widely covered via social media to inform and reassure Jamaicans.

Despite these efforts, many Jamaicans remain jittery with fear and confusion, wondering “where do we go from here?”