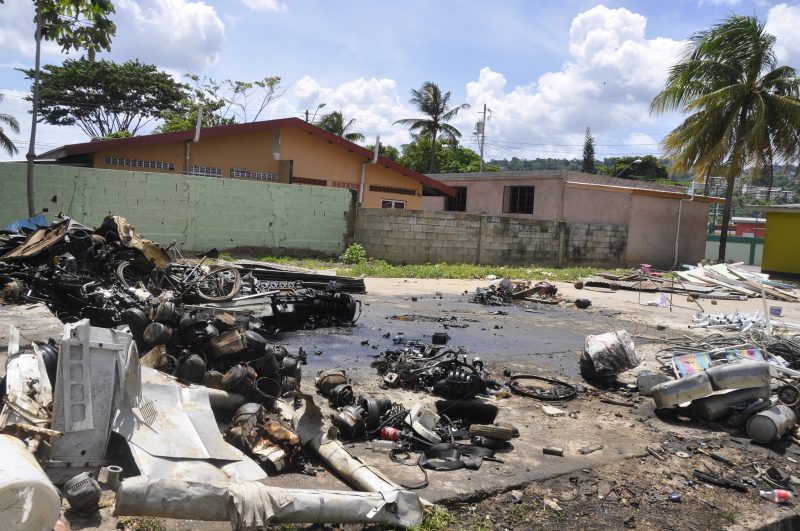 Debris strewn across the road in Beetham Gardens, Port of Spain, Trinidad. The 2012 photo is by BBC World Service, CC BY-NC 2.0.

Beetham Gardens, a low-income community within the area of Laventille on the outskirts of Trinidad's capital city, is a study in contradictions. It has a proud history of innovation and creativity as the birthplace of the steel pan, the country's national instrument, and several successful musicians and entertainers hail from the area. But Laventille has also been labelled a “hotspot” by politicians, with the inference that violent crime and gang activity thrive in the area.

While some social media users are content to buy into those labels, others are challenging them.

Back in 2011, when the then United National Congress (UNC) government, led by Kamla Persad-Bissessar, declared a limited state of emergency — ostensibly due to the country's escalating crime rate — scores of black men (many of them from the Laventille area) were arrested and detained in what felt to many like state-sanctioned racism. Many were subsequently released. Still, this image of the area persists, often feeding into deeply embedded racial and social stereotypes.

A 2014 Vice News documentary titled ‘Murder and Corruption in Trinidad’, which highlighted crime in the Laventille area, didn’t help to change this widely held perception; however, it suggested that certain politicians and business people are not only complicit — they may very well be calling the shots. Unsurprisingly, the “big fish” operate with impunity while the street level criminals get the bad rap. This is the result of decades of abuse and neglect in the area, ostracism of the people who live there, and lack of concern for their hardship. Trinidadians have often been accused of not standing up for injustice until it directly affects them.

Meanwhile, the people of Laventille contend with poor air quality (Beetham Gardens is situated opposite to the country's biggest landfill), economic hardship, and violence.

On November 23, 2017, some residents of Beetham Gardens, which borders the main carriageway in and out of Trinidad's capital, Port of Spain, had had enough. They launched a protest by throwing rocks at approaching motor vehicles, firing gunshots and blocking the roadway with old appliances and other debris. There were some accounts of robberies.

Their actions were prompted by the arrest of two “community leaders” (a term that is widely understood to be a euphemism for alleged gang leaders) in the area, Kenneth “Spanish” Rodriguez and Ancel “Chemist” Villafana. University lecturer Rhoda Bharath, who keeps her eye on political issues, added context to the situation by linking to the Vice News feature, which described “Spanish” as “the only one in the community bringing jobs and social services to the impoverished neighbourhood”. The two men were subsequently released.

During the protest, citizens who were trapped in the rock hurling comess quickly turned to their mobile phones to record various incidents that were taking place. They then uploaded the videos, and their experiences were widely shared on social networking sites like Facebook and on messaging platforms like WhatsApp.

Back then, there was an immediate outcry from social media users. Words like “fed up” and “incensed” were all over people's timelines, with some even suggesting violent retaliation against the protestors. Voices like Wired868's Akins Vidale, who warned of the dangers of a “them and us” society, faded into the background.

In an effort to understand and highlight root causes of the situation, rather than simply cry out in frustration, Vidale recently published another blog post about the issue. Noting that in November 2017, the government's response to the incident “was one of stern condemnation” and “‘no one will hold this country to ransom’ posturing”, he asked:

“Nine days” is a local expression that basically means the topic is now old news. However, the “problem”, though complex, was summed up in this perspective by Facebook user Lisle Waldron:

Y’all are a trip. […] Y’all feel unsafe when you see, hear, and feel the criminal Beetham element. Y’all outraged because Beetham dare crawl out from their holes and gutters.

Y’all weren’t mad. But I guess it’s maddening when poor people of color step out and do the same things. Cause they have the county crime full. They have the USD short. They gave themselves the handouts and contracts to build police stations. They arranged the 400 million payouts in life sport [a corruption-riddled sports programme run by the previous government].

November 2017 was not the first time that Beetham residents have protested, but criminologist Renee Cummings observed that “the Beetham playbook has never been updated”. Cummings was talking in terms of crimefighting, but it could also be argued that the approach to the Beetham community — by successive governments, the media and the general public — has not evolved either.

Take, for instance, a recent guest post at Wired868, which referred to such criminals as “pests” and offered advice “to those who have given birth to these damn annoyances”:

Keep your blasted legs closed because you are giving birth to unwanted children who become burdens to society. If you don’t want them, you think society will?

The post attributed many of these societal problems on sexual liberation and a “disregard [for] biblical principles”. The author, Akilah Holder, continued:

Of course, there are other factors contributing to crime, such as a corrupt Trinidad and Tobago Police Service, an inefficient judiciary and an incompetent government. But sexual freedom plays a big part.

I have no empirical evidence but my feeling is that a lot of these criminals are the products of young, unwed mothers who don’t have a clue what they are doing.

Opinions like these are not uncommon. Back in November, right after the Beetham Gardens protests, Jill Lian Goddard explained:

Many progressive, less damaged people understand when an abused woman ends up killing her abuser of many years against whom the police did nothing even though they saw cuts, burns, broken bones […]

Yet we don't feel the same way when a group of people who have the [worst] schools in the country so there's no hope of escaping anything through education, breathe air so bad from the burning of the national garbage next to their homes that their children sometimes can't leave home, have no real natural community of trees, animals and open spaces, have insanely stressed existences with bullets and crime which no one knows how to manage, receive just enough services to keep them alive (like the abused woman), have little access or exposure of the things required to make one's life more comfortable, suddenly lash out […] we yet trivialize what it takes to uproot oneself with few resources and no family support. […] Us as a community not understanding why we are where we are, bringing judgement to others, doesn't make it easily solvable.

Which brings us full circle to Vidale's assessment of the situation in January 2018:

The State has to respond to such incidents and the full effect of the law must be brought to bear; however, there must also be a process which seeks to prevent recurrences, inclusive of addressing the core problems which led to particular kinds of protests in the first place. […]

The fact that I sought to explain what I thought had happened did not in any way imply condonation of what had happened. […]

But I want to add that I am also well aware that if there are communities where there are more gangs than sport and recreation clubs for young people to join, then something is fundamentally wrong.

He added that the reason he brought up the country's colonial history in November 2017 was because “if we could go about our business while there are enslaved people who make up the society, then ‘lesser’ transgressions against sections of the society can also be ignored and, worse, rationalised”:

My fundamental point is about us. It is neither about the politician nor about colour of skin nor texture of hair; it is about the character and quality of the individual we are calling Trinbagonian. Individualism, selfishness and greed are not traits exclusive to our poster boys for crime. For many of us, unless there is transgression into our immediate space, we doh business [we aren't concerned]. […]

The reality is, however, that increased security in our homes is not a solution to crime; we are simply compensating and adapting. As a population, we are inflicting wounds on ourselves; the more we adapt, the less we recognise progressive resistance.

Do not be surprised if pretty soon, we find ourselves petitioning the government in unison to trade our freedom for peace.