After a Top Model is Sent to a Mental Hospital, Vincentians Fear Politics and Patriarchy Are in Play 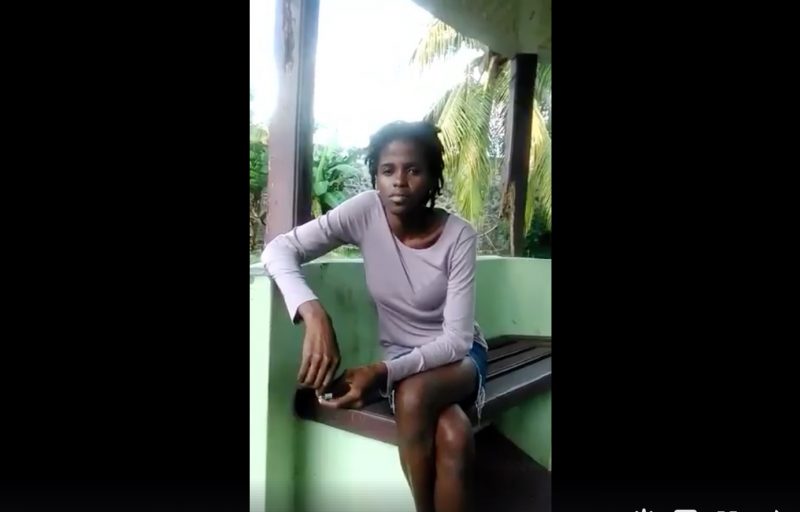 Screenshot of former Vincentian model Yugge Farrell, taken from a public video uploaded to Facebook, in which she refutes claims of blackmail by Prime Minister Ralph Gonsalves and his son, Camillo, the country's current Minister of Finance.

A young reality TV star in St. Vincent and the Grenadines has spent much of January 2018 in a mental hospital at the order of a local court. Her stay there was the result of a series of events which began with the former model allegedly calling the wife of Vincentian Finance Minister Camillo Gonsalves a “dirty bitch.”

Prosecutors are pursuing obscenity charges against 22-year-old Yugge Farrell, a runner-up in the 2015 season of the Caribbean's Next Top Model, who claims to have had a sexual affair with the minister. After Farrell pleaded innocent to the abusive language charge, the court, unconvinced by her fitness to plead, ordered her to spend two weeks in a mental hospital, undergoing a psychiatric evaluation.

On January 6, two days after the initial incident, Farrell posted a series of video rants on Instagram — which have since been taken down — claiming that Gonsalves had a sexual relationship with her.

Prime Minister Gonsalves has advised his son not to comment on the matter, but the Gonsalves family is holding to their assertion that Farrell is mentally ill. They also claim that Farrell has threatened them and that the “back story” will eventually come to light.

After Farrell completed two weeks at the Mental Health Center of St. Vincent and the Grenadines, she reappeared in court, only to be sent back to the psychiatric institution for additional observation, as per a medical report that said she was unfit to enter a plea.

Local media outlet iWitness Network reported that the prosecution provided no evidence showing that Farrell was mentally incapacitated, and has suggested that “all Vincentians must be worried” by the trajectory of events.

Online and off, the political controversy comes with the backdrop of the global #MeToo movement, the similar Caribbean regional #LifeinLeggings hashtag, and Jamaica's #TambourineArmy, whose #SayTheirNames hashtag encouraged victims of sexual abuse to break the silence by publicly outing perpetrators and demanding justice against rape.

One solidarity statement called Farrell's situation a “gross human rights violation”, and condemned “the persecution and mistreatment of Ms. Yugge Farrell by the legal, medical, and political authorities of St. Vincent and the Grenadines.”

But the St. Vincent and the Grenadines Human Rights Association noted that the court has the power to make such psychiatric evaluation orders, and therefore acted within its rights.

The case lays bare inequities in reputation, gender norms, and access to justice. With the inference being that Gonsalves has much more influence in Vincentian society, netizens are discussing whether or not the political family has used its power to try and intimidate Farrell.

At least one opposition politician is painting the controversy as a modern-day David vs. Goliath story. In an interview with iWitness, MP Daniel Cummings said:

This incident speaks to so many wrongs in our society […] the inability of ordinary folk to access the fairness of our judicial system, to have equal opportunity to get treatment across the board, as if for king and peasants. It demonstrates in a very clear way that those in authority feel that the laws do not apply to them and they can do as they like.

On January 17, the country's leader of the opposition called for Camillo Gonsalves to either clear the air on the matter or resign.

Farrell's mother subsequently gave an interview, posted on Facebook, in which she claimed to have met with the prime minister to discuss her daughter's alleged relationship with his son. iWitness also reported that Mrs. Farrell served jail time after being convicted of causing the death of her son, and that both Yugge's parents are currently facing charges of arson and attempted murder.

But these knotty sub-plots are not stopping social media users from speaking out in Yugge's defense. In one YouTube video, Allan P called the situation “an abuse of political power”. A female vlogger, meanwhile, thought that Farrell's time at the mental institution was an “excessive” punishment, and found the situation concerning, especially in light of past sexual harassment allegations against the prime minister himself.

Prime Minister Gonsalves has since stated that “blackmail letters” — allegedly from Yugge — threatened the Gonsalves family, but Farrell refuted this claim.

HUMANITARIAN CRISIS going on in St. Vincent and the Grenadines, via the ABUSE OF POWER, dictatorial politics, misogyny and patriarchal allowance that permits these men in power to obliterate the life of a young woman.

She added that it was time for women to speak out:

I am beyond SICK to my stomach, disgusted, and angry about how they are dealing with Yugge Farrell’s case. And, of course, wondering who’s next, which one of us- ‘unstable, hysterical, mentally challenged, irrational, crazy, deranged women’ – are going to be the next on the chopping block? […]

We are not here for be a repository for your anger and disappointment. We don’t exist to support your fragile egos. We are not here to make you feel better. We aren’t here to protect your vulnerability.

We will not disappear.

If Yugge doesn’t have access to justice, what makes us think that any of us are protected?

Yugge's image and the hashtag #IAmCrazyToo have been plastered on t-shirts and images in support of Farrell's cause, activists are speaking out on her behalf, and some Vincentians are asking whether the country's constitution is being trampled upon.

Will the Cybercrime Act be brought to bear?

While it has not been cited in the legal case against Farrell, the country's Cybercrime Act has been at top of mind for netizens amid controversies like this. On August 12, 2016, Gonsalves’ government passed the Act in parliament — it allows up to two years’ jail time for netizens found guilty of online defamation. Back then, the Act sparked concern among opposition politicians and human rights organizations, who cited threats to freedom of expression.

Section 16 (3) of the Act, for example, states: “A person who, intentionally or recklessly uses a computer system to disseminate any information, statement or image; and exposes the private affairs of another person, thereby subjecting that other person to public ridicule, contempt, hatred or embarrassment, commits an offence”, for which he can be given a jail sentence of up to five years or made to pay a fine of Eastern Caribbean (EC) $200,000 (just over US$ 74,000).

The director of Reporters Sans Frontières (RSF) in the United States, Delphine Halgand, took issue with some of the clauses in the Act, which she called “extremely damaging to the free flow of news and information and to public debate”.

The SVG Human Rights Association did, however, allude to the Cybercrime Law, in a statement on Farrell's case, noting that “the general public refrain from the publication and re-publication of material which is likely to attract liability either criminally, under the Cybercrime Act or civilly, subject to the laws of defamation”.

Yugge Farrell's next court appearance has been scheduled for almost a full year later, on December 17, 2018. It is unclear why the court date has been postponed as such.

Much of what has been reported about Yugge's case, the responses of the Gonsalves family, and the legal implications of the actions on both sides have been difficult to confirm. However, what is abundantly clear is that the story has touched a deep nerve in Vincentian society.

CORRECTION: The original version of this article described the St. Vincent and Grenadines Human Rights Association as being “established and is governed by the country’s Constitution”. The Association is governed by its own constitution, not that of the national government.