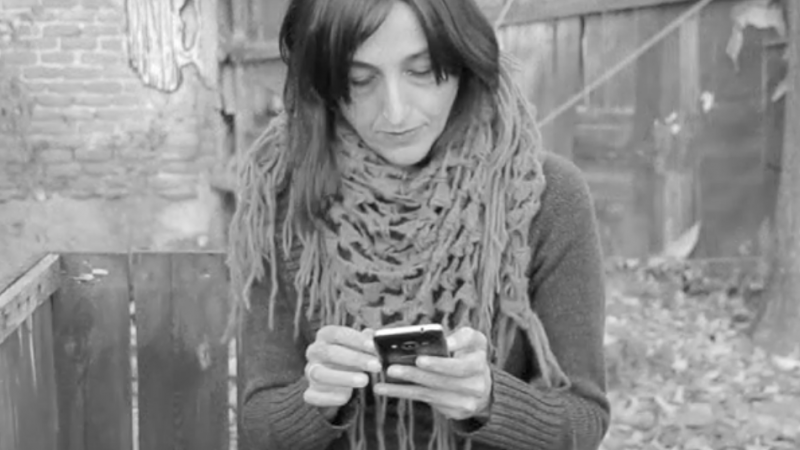 Screenshot taken from an interview of Helena Maleno by Javier Sánchez Salcedo for online media Mundo Negro. Available on YouTube and on their website [2].

On January 31, Spanish human rights activist and researcher Helena Maleno is scheduled to appear in court for the second time in Morocco, accused of participating in a human trafficking network for her work helping migrants who find themselves adrift in the Mediterranean.

Maleno is a member of the non-governmental organization Caminando Fronteras [3] (Walking Through Borders), which supports groups of migrants mostly from Sub-Saharan Africa. The accusation against her is based on the calls she has made to Maritime Rescue, alerting them to the presence of dinghies at risk.

The numerous media outlets that have interviewed her in recent days often highlight how Maleno always has her phone at hand, receiving calls constantly from people endangered at sea. “My phone is available to them. I don't know who most of the people are who call me. They give my phone number to one another and they call me when there's an emergency,” Maleno told Spanish newspaper El País. [4]

The case against Maleno started in Spain, where a court of law concluded in 2017 that there was no crime in Maleno's work [5]. However, the government of Morocco, where she has worked for 16 years, reopened the case as a response to a claim made by a department of the Spanish police called the Central Unit Against Immigration Networks and Document Falsification (UCRIF, in Spanish), the same unit behind the Spain-based complaint.

In an interview with El País, Maleno expressed her trust in the Moroccan legal system, but also her concern for the criminalization of humanitarian response and her surprise for the Spanish authorities’ strategy:

What I don't understand is why the Spanish police sent the file in which I'm accused of human trafficking to Morocco when a prosecutor in Spain has already closed the case. We cannot establish a precedent in which people doing humanitarian work can be harassed.

That same concern has been shared by many activists and organizations who support Maleno's work, such as the leadership team of porCausa Foundation [6], a group of researchers and journalists dedicated to the question of how migrants are represented in the media.

In an article written collectively by porCausa in El País, some of the members warned that if Maleno is convicted, the consequences will be grave, not only for her and Caminando Fronteras, but also for human rights advocates who work to protect those crossing the Mediterranean Sea:

[…] a political offensive like the one taking place in Morocco against Helena Maleno is a way to intimidate those who want to do something similar. This will weaken the already scare networks of protection helping migrants that use this route even more […] The possibility of the Spanish Interior Ministry — or some of its members — redirecting an attack that didn't work here [in Spain] has such a level of gravity that it needs to be cleared up at once.

[…] the southern Spanish border is the stage for a lot of illegalities, none of them related to Maleno's activities: collective expulsions (sanctioned by the European Convention of Human Rights [11]), infringement of other legal international protections, arbitrary detentions, mistreatment [12] and disregard of children's rights [10], to name just the worst offenses. However, such a fierce harassment of human rights defenders would mean crossing a point of no return.

The collective expulsions, or on-the-spot deportations, mentioned above refer to the forceful deportation of migrants who arrive to Spanish soil, a practice that disregards protections established by international law.

Maleno’s case is not unique [13]. According to reports by Amnesty International [14], José Palazón, the president of the non-governmental organization Pro Derechos de la Infancia (Pro Rights for Children), was unfairly attacked by some media outlets in the autonomous Spanish city Melilla, located on the north coast of Africa and by the social welfare department counselor. The verbal disapproval sought to undermine Palazón’s work, claiming that is was nothing more than a “personal battle” that benefited no one.

At the same time, a general attitude of rejection towards migrants [15] arriving in Europe is becoming normalized across the European Union. [13] Meanwhile, the danger remains for those who seek refuge in Europe by crossing the Mediterranean: since the beginning of 2014, [16]14,000 [16] people have died at sea.

Maleno has received resounding support from around the world, and the show of solidarity is visible on social media. [17]

A petition, created on the Oxfam Intermón platform and circulated alongside the hashtag #DefenderAQuienDefiende [18] (#DefendThoseWhoDefend), demands that the Spanish government step up to help Maleno.

At the same time, members of more than 20 organizations took to the streets to show their support in the Spanish city of Granada:

Yesterday, from accionenred Granada [Action Online Granada], together with more than 20 social organizations and political parties, we wanted to show support and be in solidarity with @HelenaMaleno [19] and the solidarity work she does. #SolidarityMaleno #DefendingMaleno #DefendThoseWhoDefend

Through their alert system, Maleno and Caminando Fronteras have collaborated to rescue hundreds of people [24] who have embarked on journeys across the Mediterranean under incredibly precarious circumstances. Maleno also helps to provide migrants with a better quality of life and fights for the recognition of their fundamental human rights.

As a result of her efforts as an activist and as a vocal opponent of social injustice, Maleno was given an award by the General Council of Spanish Lawyers in 2015.

At the core of what Maleno and Caminando Fronteras do is humanizing those who make their way to Europe. Part of this can be seen in the materials they create to educate European citizens about the resilience of the people who are arriving at their borders and the circumstances which lead them there. As she explains in the interview below: