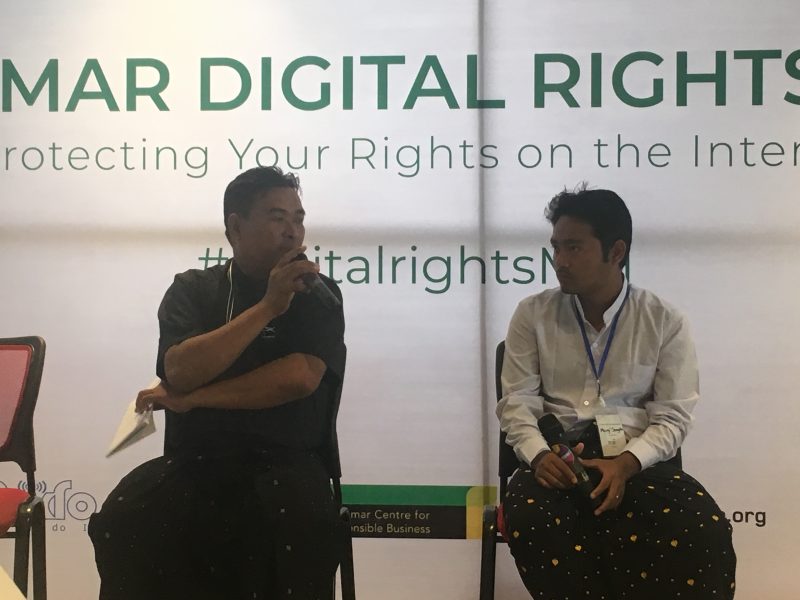 In 2016-17, every person charged under Section 66 (d) of Myanmar's Telecommunications Law was convicted and sentenced to prison.

The notorious Section 66(d) provides for up to three years in prison for “extorting, coercing, restraining wrongfully, defaming, disturbing, causing undue influence or threatening any person using a telecommunications network.”

New research by Free Expression Myanmar (FEM), a local NGO, shows that the use of Section 66 (d) has produced a 100 percent conviction rate and that penalties issued under the law have disproportionately harsh. “Every court has given a prison sentence and none has given a fine,” the group stated in the report titled “66 D: No Real Change”.

The FEM report monitored 106 cases from November 2015 to November 2017, observing that there has been an increase in the number of cases since the National League for Democracy (NLD) assumed power in 2016. NLD is led by Nobel Laureate Aung Sang Suu Kyi, who for many years had criticized the military-led government for suppressing free speech in the country.

One prominent example of how local officials have used section 66 (d) to harass the media came with the case of Democratic Voice of Burma journalist Wunna Tun. While working on an investigative story about irregularities in irrigation loans to farmers in the Bago region, village officials accused him of being corrupt and distributing inaccurate information.

Another Section 66 (d) case involved Swe Win, the editor of Myanmar Now, who was arrested over a complaint filed by a member of the ultra-nationalist Ma Ba Tha movement over a Facebook post in which he suggested that its leader, U Wirathu should be expelled from the monkhood for lauding the murder of NLD legal advisor Ko Ni. Ko Ni was a rare prominent Muslim political leader in Buddhist-majority Myanmar.

FEM lead researcher Maung Saungkha also has been charged for violating Section 66 (d). The prominent poet and social activist shared a summary of his case:

The government arrested me and put me in the prison because I wrote a poem about the president on Facebook. Since I have to face my trial from the prison, I was at a great loss. The sentence was six-month imprisonment. Since I have already stayed in prison for seven months, I was released immediately after the sentence.

In the poem, the narrator describes having an image of an unnamed president tattooed on his genitals.

Saungkha was charged under section 66 (d) of the Telecommunications Law and section 505(b) of the penal code. He still stands for his artistic rights as a poet and is at the forefront of the campaign to repeal section 66 (d).

According to him, the FEM report confirmed worries that the changes made in 2017 to the law were not sufficient.

In this research I manage to let the public know that there are still cases being charged under 66D and freedom of expression is still limited in the country.

The report notes that several provisions of the law are vaguely and narrowly described and subject to different interpretations. For example: section 66 (d) does not adequately define what actions would be considered “disturbing”, or “causing undue influence.”

The Burma Campaign – UK explained how the law undermines freedom of expression:

It is widely used against journalists and activists. Some media even refuse to publish articles which criticise the military or the government to avoid being sued and jailed. The law puts such control on the media that it leads to self-censorship. It also appears that some NLD leaders find Section 66 (d) useful to suppress criticism towards the government.

Human Rights Watch commented that the law “has opened the door to a wave of criminal prosecutions of individuals for peaceful communications on Facebook and has increasingly been used to stifle criticism of the authorities.”

Free Expression Myanmar was established by a group of human rights defenders who are leading a new civil society coalition that seeks to challenge the Telecommunications Law, and advocate for the removal of Section 66 (d).

The coalition is called the Movement for the Telecommunication Law Reform and Section 66 (d) Abolition. To promote awareness about the issue, the group launched a new website that contains a database of all section 66 (d) cases.