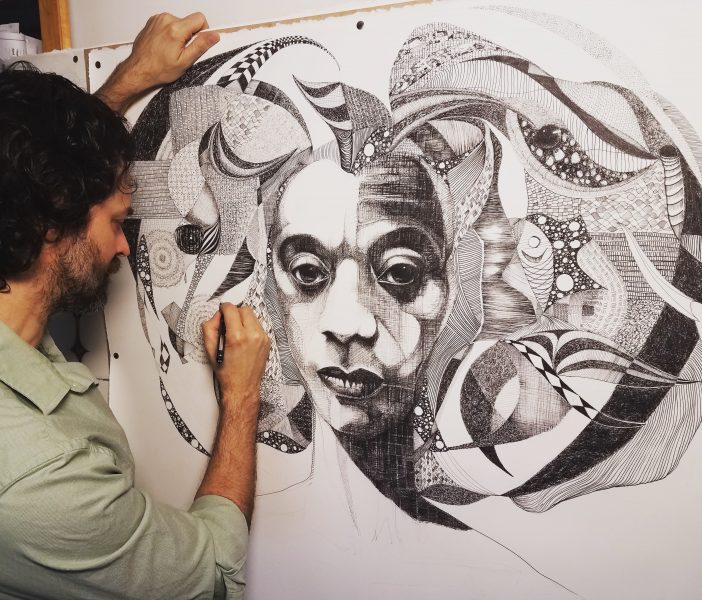 In his exhibition “All Her Number’d Stars”, currently on at Susan Eley Gallery in New York City, Iranian-British artist Jason Noushin explores the dynamic interplay between the two cultures that undergird his identity.

Noushin left Iran when he was 13 years old, but Persian culture still permeates his life, and in his artwork his Persian identity is thrown into stark and beautiful relief by his immersion in the culture of the west. The most stirring pieces in the show meld these different influences.

“Returning to the language of his childhood home, Noushin incorporates Persian calligraphy in many of his paintings and sculptures,” the Susan Eley Fine Art Gallery states in its press release for the show. “Farsi transliterations of poetry written by British literary greats such as Keats, Hawthorne and Shelley, are drawn across his canvases and reflect a reconciliation of the cultures that have shaped him.”

In addition to paintings and sculpture, the exhibition includes several of Noushin's drawings, demonstrating his skill and understanding of different media. “I've been drawing since I could hold a pencil,” Noushin said.  “It was always the most accessible form of art available and still today, is the foundation of everything I create.” 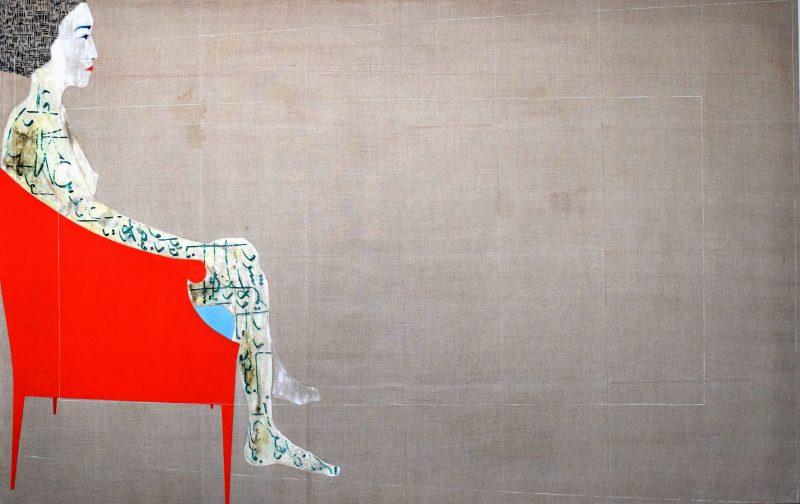 Sonnet III, a Jason Noushin painting with Persian calligraphy from “All Her Number'd Stars” collection at the Susan Eley Gallery. Image provided by Jason Noushin.

Noushin’s grandfather kept him supplied with drawing pads and pencils. His aunt Massoumeh Noushin Seyhoun was a painter, and one of the most important influences in her nephew’s life. According to Noushin, his aunt “early in her career recognized her passion was in promoting her peers in the nascent Iranian art market.” She launched Seyhoun Gallery in Tehran in 1966, which, from its inception, represented some of the most important Iranian artists of the twentieth century. Massoumeh Noushin Seyhoun passed away in 2010, but the Seyhoun Gallery lives on as the oldest art gallery in Iran.

Noushin stuck with drawing through his childhood. Painting came many years later. “My good friend Philippe gave me an easel, brushes, oils and a canvas in Paris when I was 24 and said knock yourself out.  That's how I learnt to paint, by trial and error and free-form experimentation.”

In an interview, I asked Noushin about his current exhibition, the significance of collage and calligraphy in his paintings, his use of a variety of media, and his sources of inspiration. Coming from a rich artistic background, Noushin’s paintings reflect an illuminating conversation about culture, identity and traditions mixed with familiar elements like pieces of comic books, which turn up in his paintings in subtle, harmonious and compelling ways.

Omid Memarian:  How did “All Her Number’d Stars” come about?

Jason Noushin: “All Her Number’d Stars” was the direct result of another show, Beyond the Ban: Iranian Contemporary Art, held at Susan Eley Fine Art Gallery in the summer of 2017. The show was a benefit for the Center for Human Rights in Iran. I donated several canvases which were well received in the show. That led to a studio visit, and the rest is history, as they say.

OM: In your recent exhibition at Susan Eley gallery in Manhattan, you have sculptures, drawings and paintings. What does the use of different media signify for you?

JN: I'm a restless person and can lose focus—even interest—if I work on any one thing for a prolonged period. When I was younger, I'd translate that restlessness into working extremely fast to finish a painting in a single day. As I only work in oil, that meant working wet on wet, which can create particular challenges. To remedy this, I started painting on cardboard, which forces the paint to dry quicker. With more maturity I slowed down and allowed paintings to rest before being reworked. That, naturally meant working on several pieces at any given time, creating a more cohesive body across disciplines.

Working in two and three dimensions and trying to solve the same problem in multiple ways furthers my understanding of the practice of art. I have no formal art education and don't feel bound by rules. I see this as a limitless opportunity to learn and experiment. Making art is like a puzzle that changes with time and place.

OM: Collage has a dominant presence in many of your works, with elements that seem to have connections to identity as an underlying theme. What’s your thought process behind choosing  elements like Persian calligraphy, comic books and fonts?

JN: I was an antiquarian book collector/seller for over a decade. In that business, a small percentage of purchases are unsellable due to their condition. I started recycling pages from these old books as a support for my ink drawings and years later the same procedure created the comic book collages. As you say, there is a connection to identity. Art is not made in a void; it all comes from somewhere. I suppose my favorite memories (maybe somewhat exaggerated) are from my childhood in Tehran before the revolution. I enjoyed reading comic books and playing street soccer as boys do in Tehran. So, yes, these comic book collages are reminders of a time and place that no longer exists. 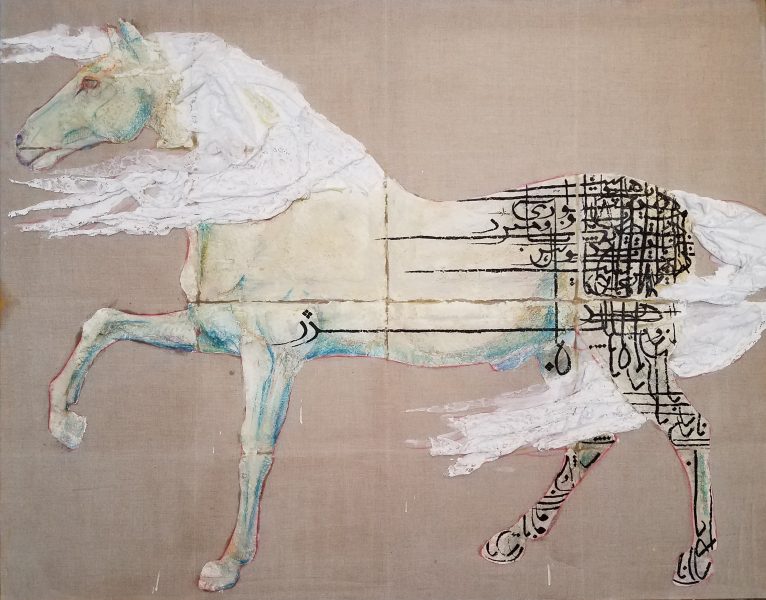 Jason Noushin's ‘All Her” from the “All Her Number'd Stars” collection at the Susan Eley Gallery. Image provided by Jason Noushin.

OM: You have lived most of your adult life in the UK and the US. But, particularly in your paintings, Persian elements like calligraphy have a strong presence. How do you define this connection?

JN: Surprisingly, I've lived in the United States longer than any other country. I came here 20 years ago with the intention of returning to France after a year but, that didn't come about. Although I haven't been back to Iran since I left at age 13, being Iranian, with all the richness of its culture and language, is present in my everyday life. It is who I am no matter where I live.

OM: Women are the subject of many of your works. Where do they come from?

JN: I find women more interesting than men. The majority of people I know are women.

This might be the result of being raised by two extraordinarily strong women, my grandmother and aunt.  My grandfather was a very quiet and private man. So it's not surprising that my work reflects that. The female protagonist is almost always the same person but, she wears different skins, such as calligraphy or comic book leaves, which were an important influence in my teens. 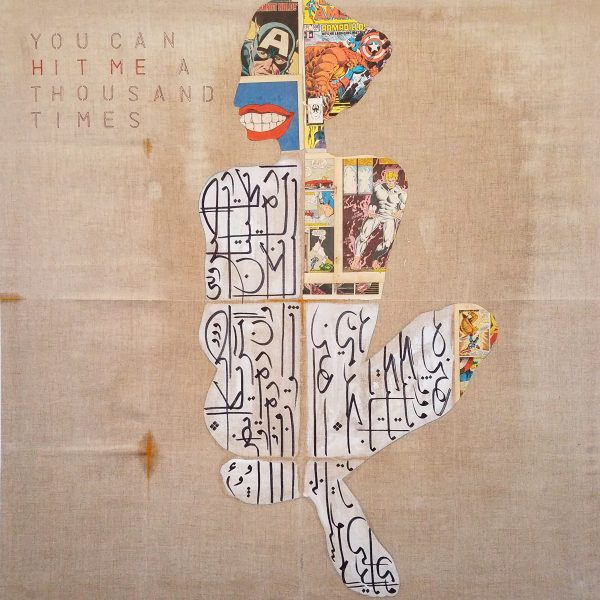 Jason Noushin's ‘Hit Me’ in the “All Her Number'd Stars” collection at the Susan Eley Gallery. Image provided by Jason Noushin.

JN: I've always been fascinated with human history. As a schoolboy, I was captivated with the ancient Egyptians after a visit to the British Museum and for a couple of years thereafter, I tried learning to read hieroglyphs. I like the smell of history and prefer old to shiny new. That is the source of my interest in antiquarian books. Nostalgia is not tangible but, if you want to capture some of it and make it your own, art is the best vehicle. Art has the power to transport you to a different time and place. My imagination is more active when I think of the past rather than the future.

OM: What is the starting point for your painting, and what choices must you make before the paint hits the canvas?

JN: A painting always starts with choosing the linen, stretching and sizing it with rabbit-skin glue, then staining, folding or otherwise manipulating the canvas. I spend just as much time creating a support as I do painting, drawing or building upon it. I find these stretched canvases so beautiful, that at times I fear I'd be ruining them with an added image.

OM: Your imagery includes references to pop culture and traditional elements like calligraphy.  Do you think your work belongs to a specific school?

JN: I really don't know. I’m still exploring. Obviously, the influence of pop culture and traditional Persian calligraphy are at odds with each, but their combined visual impact is harmonious. It's stylistic, it's decorative, it's deeply enthralling and engaging at the same time.

OM: Despite the busy nature of some of your works, they exhibit a harmony in scale, color and texture. What are your visual references?

JN: The practice of art is always in flux for me. I try not to constrict myself with rules or get comfortable and lazy repeating the same work. Mixing Western pop with Eastern calligraphy is a fun and recent challenge. However, a change is bound to happen sooner than later.

Visual references can come from anywhere. Ideas can sometimes they stay dormant for long periods, years even before I can adequately execute them. I spend a lot of time reading about art, walking through galleries and museums, absorbing the process and methods of others. Nature, too, is a singular source of inspiration.

These three are headed to Brown University's @watsoninstitute and the John Nicholas Brown Center for Public Humanities this morning. The show runs from October 27, 2017 to January 27, 2018. Opening is November 8th. CROSSING BORDERS, curated by Judith Tolnick Champa and @jocelyn_foye #art

OM: What’s the significance of calligraphy and or Persian alphabet that repeat as a pattern in many of your works?

JN: Persian calligraphy is a beautiful art form. Although it's the same alphabet Arabs use, Iranians have perfected and mastered this art form. Calligraphy is extremely versatile and I’m experimenting with its limitless possibilities as an extension of line drawings.

OM: Are you in touch with Iranian artists and the art scene in Iran in recent years?

JN: I have met some very talented Iranian artists here in New York. Some travel back and forth to Iran. I haven't but, I miss it, especially the street food. I'd love to have a show in Tehran. That'd be the perfect excuse for a visit.