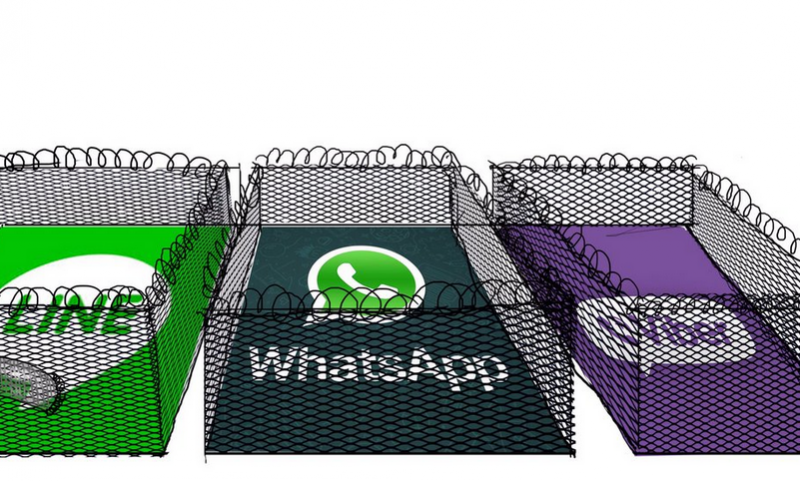 In an attempt to stem a cash flow crisis, Tajikistan is taking up increasingly hostile postures towards digital communications companies.

In recent months, the government has made moves to monopolize the internet service provision and revoke licences for cheap IP-based call services. It has also been reported that restrictions are being placed on popular mobile messaging applications.

These changes all could make life costlier for users in Tajikistan, the poorest country to emerge from the Soviet breakup.

At the beginning of January 2018, the state Communications Service ordered local, privately-owned internet service providers (ISPs) to purchase internet infrastructure only from the state-owned company “Tojnet” (managed by the state's telecommunications monopolist “Tojiktelecom”) instead of buying it directly from neighbouring Kyrgyzstan, as was their custom.

This was made worse when on December 18, 2017 authorities revoked ISPs’ licenses to provide IP-based cheap call services through a protocol known as NGN (New Generation Network).

At the start of 2018, users reported problems making calls through call and messaging app Viber, and suspected that the government was blocking the app.

Although state officials claimed that they took these measures in the interest of “national security” “because of extremists’ threats”, motivations for revoking NGN service and blocking Viber's audio and video call features appear to have been more economic than political. Both had become a thorn in the side of state-run Tojiktelecom, as they allowed millions of citizens with friends and relatives working abroad to keep in touch without using costly international calling services.

Over a million Tajiks are migrant workers outside the country, mostly in Russia. If it weren't for apps like Viber, Tajiks would likely be using international phone lines to call their relatives, and thus generating revenue for Tojiktelecom, the government-run international exchange point for telephony. Or they would simply call home less often.

While massive numbers of users complained Viber had become inaccessible at the beginning of the year, problems using the app later evaporated under mysterious circumstances.

Viber began working again some days ago, but its functionality has been inconsistent, with some users reporting that they are unable to make calls, while others say it is full functional. IMO, another popular messaging app, remains fully functional.

Curiously, the news website Akhbor, claimed that the (perhaps only partial) revival of Viber was the result of an intervention by Rustam Emomali, the 30-year-old mayor of capital city Dushanbe, who is also the son of long-reigning autocrat Emomali Rakhmon.

While the news report is seemingly based on the testimony of a single anonymous government source, the claim is believable.

Viewed as his 65-year-old father's most likely successor, Emomali has used social media and apps to boost his public profile in his new role, after prior stints in charge of the customs service and state anti-corruption agency.

Only three months ago [Emomali] ordered the creation of a channel on Viber through which the general public could get in touch with the city government, so he is hardly likely to want to see the app being squeezed out.

Communications as a cash cow

Few major companies operate in Tajikistan. The country of 8.5 million is largely agrarian and strongly dependent on cash transfers sent by migrants working in Russia, which have dropped as a result of the economic downturn there.

That has left telecom companies and Internet Service Providers (ISPs) among the most significant contributors to Tajikistan's state budget. And beyond taxes, the companies have made other contributions to the state coffers.

At the beginning of 2017, at least three large telecommunications companies, two of them Russian (Megafon and Beeline) and one European (Tcell), faced large fines for tax evasion, ranging from USD $17 million to $35 million. The companies took the case to a local court but lost their legal battles. The only locally-owned major telecom, Babilon-M, was fined around USD $55 million in 2014.

Tajikistan also expects global tech firms to line up and pay. At the end of 2017, media reported authorities were looking to tax Google, Alibaba Group, and Telegram.

The basis for the reports was a letter from the head of the local tax committee to the government of Tajikistan dated September 2017  but leaked in December 2017. In it, tax chief Nusratullo Davlatzoda complained the Russian state budget had seen billions of rubles in income from Google, Apple, Alibaba, Amazon and others in 2017.

The same letter also supports the idea that the attempted block on Viber was rooted in economic concerns.

The official blamed mobile messenger apps including Viber, WhatsApp and IMO for allowing Tajik citizens to communicate with their relatives in Russia free of charge:

There is a need to take appropriate measures to regulate all actions carried out via the Internet. It is necessary to introduce a provision in the tax legislation that provides for the obligation to pay taxes for provision of services in electronic form, including tax from Internet.

Akhbor news site meanwhile recalled the words of the same official from a few years ago, when he was asked why the country was raising taxes on mobile companies:

Now even barefooted ones have a mobile phone…

Blocks can be political, too

While the latest restrictions on online activity seem to stem from the country's dire economic situation, major platforms have been blocked for political and security reasons n the past.

YouTube famously became inaccessible in 2013, after a video of President Rakhmon singing and dancing at Rustam's wedding went viral. Russian social media website Odnoklassniki went down in 2014, apparently due to its popularity among Tajiks who had joined extremist groups fighting in Syria. Facebook, a hub for online opposition to the Rakhmons, has also been blocked on numerous occasions. All these come alongside many other blocks on small websites and blogs.

Most of these blocks are attributed to the country's communications director, Beg Sabur, who is related to the ruling Rakhmon family by marriage.