Afghanistan Reels From Two Deadly Attacks in Less than a Week 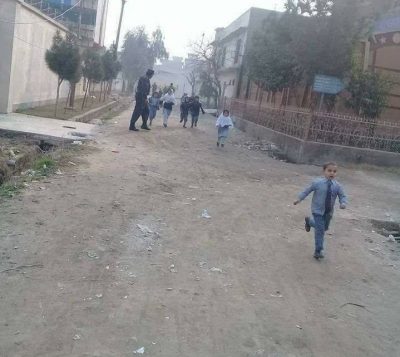 Children fleeing the compound targeted by gunmen in Jalalabad province. Photo courtesy of Zahra Joya. Used with her permission.

January has brought no shortage of sad news to Afghanistan after two attacks in quick succession shook citizens of the country.

On January 24 gunmen stormed the compound of international aid organization Save the Children in Jalalabad Afghanistan, killing three and leaving dozens wounded, according to Afghan officials.

That was less than a week after an assault by militants on the Intercontinental Hotel in Kabul left at least forty dead, highlighting the extreme dangers of living in the capital for Afghans and foreigners alike.

Save the Children attack

Save the Children's Jalalabad office was targeted on January 24 by a car bomb attack. After the explosion, gunmen exchanged fire with local Afghan forces for around ten hours.

Save the Children confirmed three of its staff members have been killed in the eastern region, including two guards and one civilian. An Afghan government spokesman Attaullah Khoygyani said 20 people were wounded. Afghan Security Forces rescued 46 others, he added.

The organization has temporarily suspended its Afghan operations.

The brutal militant group ISIS claimed responsibility for what it called an attack on “British and Swedish institutions”.

While the attack on the Intercontinental bore more casualties, even citizens used to seeing their timelines flooded by violence were shocked by the attack on a children's charity.

Another sad day in Afghanistan; a cowardly and heinous attack by a bunch of terrorists on a humanitarian organization that serves the Afghan children. We are with #SaveTheChildren

Imagine these children.
What might going through their minds. https://t.co/Ozj2jP3PpV

Wow I’m shocked at how low someone can go to attack a #SaveTheChildren center! A place where charity comes first to help save innocent children and future of out world! #WednesdayWisdom #LeaveKidsOutOfIt pic.twitter.com/JZwz2potif

Local residents are escaping after suicide attack on Save the children office in #Jalalabad,#Afghanistan pic.twitter.com/xekdCrf6r6

The January 20 attack on the Intercontinental, in turn, saw insurgents spray residents of a luxury hotel in the capital Kabul, leaving 25 local citizens and 15 foreigners killed. Survivors’ accounts are harrowing.

The attack was claimed by the Taliban.

We were still bleeding from the #KabulAttack, now the evil soldiers attacked #Jalalabad Save the Children organization. It’s never ending! #JalalabadAttack https://t.co/sarizJImrf

In recent years, International aid agencies have been constantly targeted by various groups that fight against the embattled Afghan military across the country. As a result, many have been closed or downsized, leaving vulnerable Afghans at risk. Last year, the International Committee of the Red Cross reduced its presence after many its staff members were killed and kidnapped in different parts of Afghanistan.

The Red Cross have already rolled back activities after a shooting, MSF have been attacked, orgs in Afghanistan continue to draw down. This attack can have serious consequences for Afghans in need of aid https://t.co/umZbmgMDB0

The limitations Save the Children will impose on their future activities in the country are not yet known, but their mission is certainly necessary. Afghanistan is considered among the most dangerous places for children to be born and grow up following three decades of conflict that have entrenched poverty and violence.

Save the Children has been operating in Afghanistan since 1976, and currently runs programs across 16 provinces in the country. The aid organization, which aims to promote better education, healthcare and provision of essential supplies to children, said it has reached out more than 700,000 Afghan children during its time in the country.