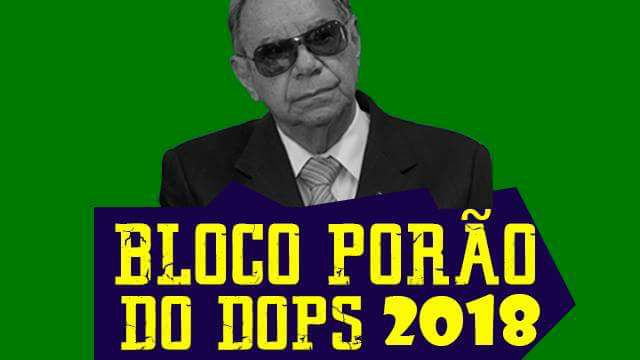 The cover photo for the piece “Block of the DOPS Basement” shows the colonel Carlos Alberto Brilhante Ustra, the only commander from the dictatorship sentenced by the Brazilian courts for crimes of torture. Photo: Shared/ Facebook

A group of carnival organizers intends to celebrate what is literally and figuratively one of the darkest places of Brazil’s recent history: the basements of the Department of Political and Social Order (DOPS), where hundreds of people were tortured during the military dictatorship of the late 20th century.

DOPS was the main repressive agency of Brazil’s military junta, which took power after the 1964 coup d’état, which was supported by conservative sectors of society and the US Department of State. The coup brought the ouster of President João Goulart, seen at the time as sympathetic to communism.

According to the country's truth commission, at least 1,800 people were tortured at the hands of DOPS, with most of them having been suspected of harboring communist ideas or sympathies.

The dictatorship lasted until 1985 and was characterized by press censorship, repression of opposition demonstrations, systematic torture, illegal prisons, and disappearances. According to the National Truth Commission, instituted by the federal government in 2011 to investigate human rights violations committed by the state in this period, 191 people were assassinated and 243 disappeared. The final report, released in 2014, stresses that the numbers could be higher, as these count only the confirmed cases.

With the commission only four years in the past, the “Porão do DOPS” carnival block (the term “block” refers to a group leading a carnival section) sent shock waves around the country when an invitation to the event appeared on Facebook.

Illustrated with a photo of Colonel Carlos Alberto Brilhante Ustra, the only military officer sentenced by Brazilian courts for committing acts of torture during the dictatorship, the event calls itself “Brazil’s biggest anti-communist block”, taking advantage of the double meaning of the word “block”. The invitation promises “beer, oppression, meat, oppression and oppressive carnival songs” for those who participate.

The event was created by a page named “Right-wing São Paulo”, which last year led protests in São Paulo against the visit of American feminist philosopher Judith Butler. The demonstrators accused Butler of being the “biggest propagator of gender ideology” and even burned a doll with a photo of Butler’s face while shouting “burn the witch” in front of the venue where she gave a lecture.

On 16 January, the Public Ministry of São Paulo opened an investigation against the “Porão do DOPS” organizers. According to the prosecutors, the group is “insulting the rights to truth and memory” and “promoting apology for the crime of torture”. Prosecutors asked the police to investigate the latter, which is punishable under Brazilian law by up to six months in prison.

In a note shared on Facebook, the organizers asserted that “they will not back down if faced with ideological proselytism”. The also suggested that the prosecutors should “take advantage of the rest of the holidays to hang out in Venezuela”.

The block is so far only a Facebook event, as it is not featured in the official program of São Paulo’s carnival. The owner of the restaurant where the gathering would have taken place changed their mind following the fallout from the case. According to the organizers, a new venue will be made known only via email to those who signed up and paid the entrance fee (R $10) beforehand.

The political spectrum of carnival

The recent strengthening of right-wing movements in Brazil has triggered intense disputes about public memory of the military dictatorship.

Since the 2013 protests — which unleashed a complex chain of events that preceded the impeachment of then-president Dilma Rousseff in 2016 – groups have been taking to the streets and social networks to demonstrate their support for the former regime and, on occasion, call for the military to return to power.

The politician Jair Bolsonaro, pre-candidate for president in 2018, is one of the most notorious defender of the dictatorship, having praised the colonel Ustra while he voted for Rousseff’s impeachment. Rousseff was arrested by the regime in 1970, when she was a political activist who opposed the regime, and was tortured while in jail. 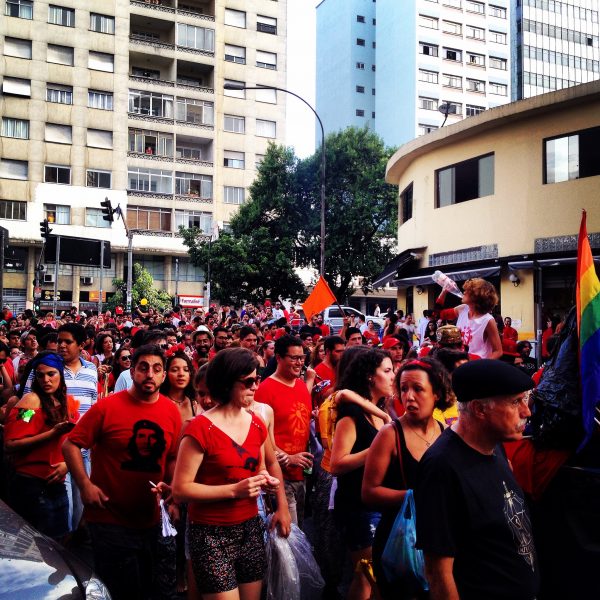 The organizers of the DOPS Basement carnival block assert that the initiative is a response to the already established “Soviet Block”, which has paraded since 2013 referencing socialism and bearing a name which plays on the geopolitical term [“bloc”]. In five years, the block went from an improvised gathering of left-wing friends gathered around a shopping trolley to a parade with around 20,000 people and a float.

As was to be expected, a prolific discussion was sparked online about the two blocks. Commenters questioned the validity of equating the two regimes and brought up the possibly satirical and self-deprecating wording of the “Soviet Block”. On Brazilian social media it is common for right-wingers to call left-wingers “communists” pejoratively, or to tell them to “go to Cuba”, a catchphrase enthusiastically adopted in the Soviet Block’s songs.

There is a difference between the soviet block calling themselves “soviet block” and not “gulag block” that the people of the “dops basement block” clearly did not catch when they invented this name.

[Fábio]: Sorry Gustavo, but you only made clearer the euphemism they used. For me, allow me to disagree, it does not change anything. If it was “Dictatorship Block” (not directly glorifying torture) and for that they all wore shirts with rats in barrels or photos of shootings, then would they be able to?

It is, for me the question is if they are really commemorating the USSR or the gulags or only using it ironically, joking with something that is often imputed to the left.

In December, the Soviet Block announced that it would not participate in the São Paulo carnival due to bureaucratic issues faced at the city hall.