#JusticeForAsifa: A Young Girl's Murder Shocks Jammu And Kashmir Residents — But Not the National Media 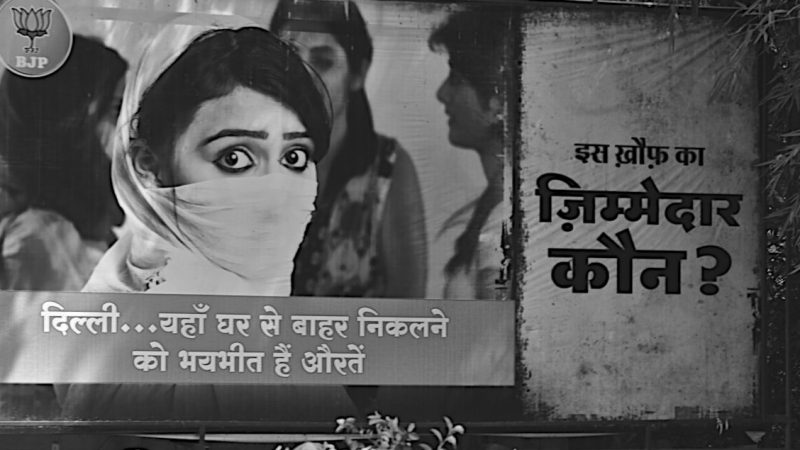 The text on the poster says: “Delhi… Here women are scared to step out of their house. Who responsible for this intense fear?” Image by Francois Decaillet via Flickr. CC BY-NC-ND

As Pakistan grapples with bringing the perpetrators of seven-year-old Zainab Ansari's murderer to justice, another heinous killing across the border, in the northern Indian state of Jammu and Kashmir, has shocked local residents.

On January 17, the battered, lifeless body of eight-year-old Asifa Bano was found in a forest in Hiranagar area of Jammu and Kashmir's Kathua district. News reports in Kashmir's local press said Asifa appeared to have been raped and tortured before she was killed, and that there were human bite marks on her body.

Asifa Bano had been missing for a week before her body was recovered. Family members told local media that they had filed a First Information Report after she went missing, but that police were slow to investigate her disappearance. Asifa and her family belonged to the Gujjar-Bakarwal semi-nomadic tribe.

Local officials, citizens, and journalists in Jammu and Kashmir have all decried Asifa's gruesome murder and have drawn parallels with the killing of Zainab Ansari in Pakistan. There also have been public demanding justice for the child.

When one wakes up to know about the horrendous news of kidnapping, rape and killing of 8-year old Asifa Bano in Kathua. This is gruesome beyond words. Sadly this savagery has no boundaries. #JusticeforAsifa

Local resident Nadir Ali reflected on the incident and the state of society:

Soul of Jammu and Kashmir is in revolt.. 8-year-old daughter was raped and killed. Where are we heading??? Are we going backward into the future?? We all should stand together and give justice to Asifa's family.

i literally hv no words to describe what i am feeling right now..this is a henious crime and i want these culprits to be punished so severely that no one dares to even think about committing such an act #JusticeForAsifa #JusticeForZainab https://t.co/1rntcduMjL

But nationally, reactions to the incident have been sporadic, with many Indians refraining from commenting or staging protests against the heinous crime. In contrast to other senseless killings, there have been no candlelight marches or petitions for justice.

Major publications such as Zee News, Times Now and Republic, which are known for their generally supportive stance towards the government, have not reported on the incident. Such stories often become the fodder for prime time debates with trending hashtags and long editorials, especially when they happen in urban areas. But in this case, where the victim comes from a remote region in Jammu and Kashmir and belongs to a minority community, national response has been relatively muted.

A local newspaper, which doesn’t report about the gruesome rape-and-murder of an eight-year-old-girl on its front page, can be appreciated as nothing but Pimp-Of-Journalism or Dalla-e-Sahafat. The tragedy of Gujjar girl, whose family isn’t resourceful enough to seek justice, gets fudged as a routine murder report on some inner page with no mention of rape.

Hyderi again made a pertinent point about the gruesome murder and rape:

We all are silent because it wasn’t our daughter or sister or maybe she wasn’t from our community or tribe; she didn’t belong to the circle of influence that could awaken our souls.

Let’s not communalize the spine-shivering tragedy as being the case of a Hindu, Muslim, Sikh or Christians; Unless we humans wake up against such crimes as one voice regardless of religious or other beliefs, someone’s daughter will continue to fell prey.

As of now, let our heads hang in collective shame. Sorry, Asifa we did nothing for you because your rape and murder don’t serve our interests!

In the Jammu and Kashmir Assembly, the opposition political party, National Conference (NC) staged a walked out protesting against the murder while the ruling party announced swift investigations. The chief minister of Jammu and Kashmir, Mehbooba Mufti, has condemned the incident and called for speedy investigations. A 15-year-old boy has been arrested by police in connection with the murder.

Outraged by the heinous incident in which a young Bakerwal girl has lost her life. Incidents like this will be investigated expeditiously & the guilty will be punished.

Over the past two weeks, this incident and another killing, along with a string of ten rapes in the Haryana region have forced government and media to focus on the issue. Hundreds of women were molested by hooligans on new year's eve in 2017 which led to major protests across the country.

Meanwhile, in Jammu and Kashmir, many are still asking why hasn't Asifa's murder shaken India's conscience. Why has there been such limited media coverage of this crime? The rules and norms that dominate India's systems of law and governance may have a long way to go when it comes to protecting the rights and physical safety of all Indians — especially women and girls.