The logo's legend explains that the brick red rectangle on the far left is Crimea, the annexed peninsula that is the source of much of Russia's latest woes // russia-brand.com

With the 2018 FIFA World Cup beginning in June 2018, Russia’s federal tourism agency is seeking to put forth a fresh image of the country. Football matches will take place in 11 cities across Russia.

In anticipation of the games, Rosturizm recently unveiled the country's new tourism “brand”: “The Whole World Within Russia”, so named for the wealth of cultures and peoples that can be found in the country.

The result of a two-year-long contest with more than 500 submissions, the winning campaign draws upon the rich avant-garde artistic movement of Suprematism, developed in the early 20th century by artists such as El Lissitzky, Kazimir Malevich, and Ivan Kliun.

The main logo evokes the map of the Russian Federation, from the annexed Crimea across the Ural Mountains to Russia’s Far East and beyond. With over 170 officially-recognized ethnic groups and 100 minority languages in Russia, the logo seeks to convey the ethnic, linguistic, and cultural vastness of the country today.  The collection’s other design concepts superimpose images of Russian artists, food, athletes, landscapes, and art styles onto the main image. 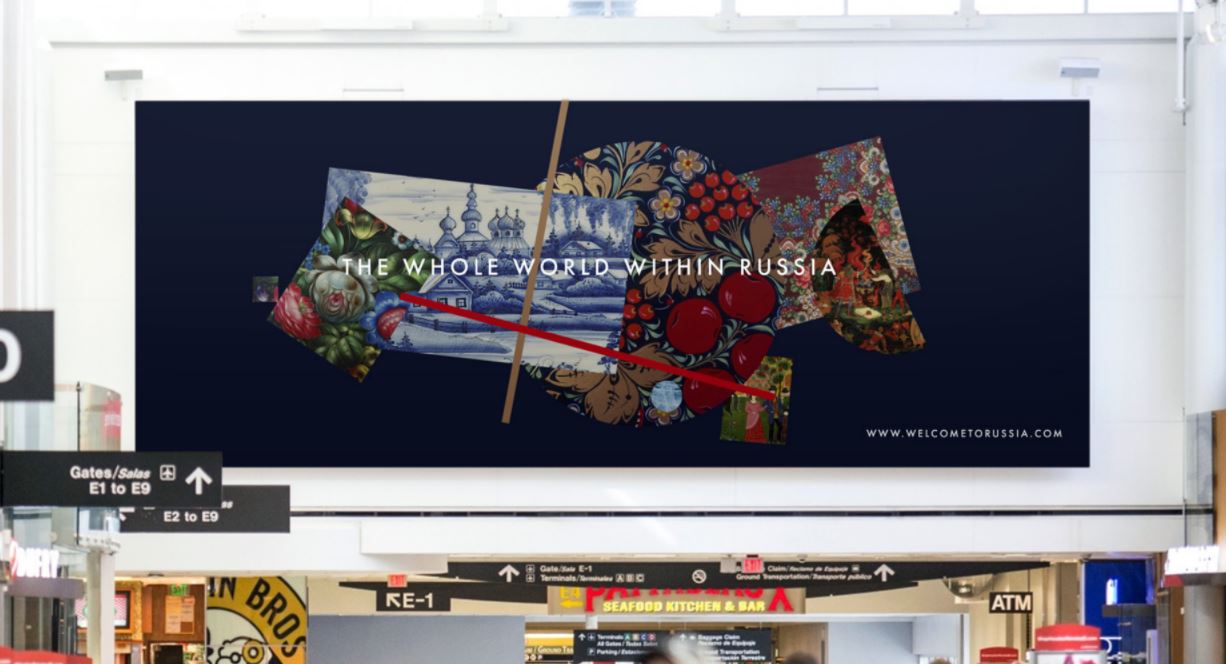 The winning design will be rolled out at a moment of great anticipation for Russia's tourism industry. In tandem, state and industry leaders hope that the number of foreign visitors to Russia will continue to increase, spurred by interest in the game.

According to Rosturizm, foreign tourism rose by 14 percent from 2016 to 2017. FIFA recently reported that over 3 million tickets have been requested for the World Cup’s various matches. In the event that demand outpaces supply, a lottery system has been developed to determine who will get tickets for certain matches.

With a reported 38 percent of these requests coming from abroad, the Russian government has worked with FIFA to develop a visa-free travel regime for the duration of the games. The visa-substituting “Fan ID” also comes with free transport between host cities, and given the enormous distances one would have to travel across Russia, these efforts are aimed at streamlining tourism during the games as much as possible.

Tourism experts are counting on the games to affect the amount of tourism even after the championship comes to an end. However, expectations have been tempered by the country’s experience with the 2017 FIFA Confederation Cup. As the press release for a tourism conference put out by the Russian business publication Vedomosti states:

…didn’t live up to the expectations of the tourism industry. The number of visitors was evidently much lower than organizers had planned, as these guests preferred to get lodging in private homes, making reservations through online services and bypassing tour operators, who were ready to provide excursions and convenient logistics.

For this reason, the projected number of World Cup visitors from abroad was lowered from about two million to one million after the Confederation Cup ended.

US warns tourists of ‘terrorism and harassment’

And just as the first stage of ticket sales is drawing to a close, the State Department of the United States released updated travel advisories for American travelers to Russia, citing terrorism and harassment of American citizens by law enforcement agencies as reasons to “reconsider travel”.

The move was soundly derided by Russia watchers:

#US #StateDepartment travel advisory puts #Russia in cat 3 of 4: “reconsider travel” – ostensible “due to terrorism and harassment”. This is absolutely ridiculous. Whether a political move or stupidity, truly ludicroushttps://t.co/rtOvj9NwjK

*not the part about avoiding travel to the North Caucasus and Crimea – that's prudent.

The travel advisory was immediately rebuked by the Russian Foreign Ministry, whose spokeswoman, Maria Zakharova, questioned the risk to US travelers.

The US, however, was not the only country to issue travel advisories. The French government issued an advisory last year, though as one commentator noted, the accompanying graphic may have helped to contextualize the advisory a bit more than the American one:

Following the State Department's controversial travel advisory on Russia, here is the same advice from the French ministry of Foreign Affairs: all safe, except for the South Caucasus. Seems a bit more legit. https://t.co/ZjfgxS15AP pic.twitter.com/1qTNcnXXGf

With the United States and other European countries being counted on to supply a large portion of tourists for the World Cup, it remains to be seen whether these advisories will have any effect at all on the number of visitors.

In any case, Russian tourism experts are also looking to Latin American fans for their huge travel potential, because in contrast to European fans — who can travel to Russia more readily and may only come for certain days — fans from Latin America may end up staying for weeks to make their long trips worthwhile. Regardless of which countries top the leaderboards for number of tourists to Russia, for a month this summer, there truly will be a “whole world within Russia.”