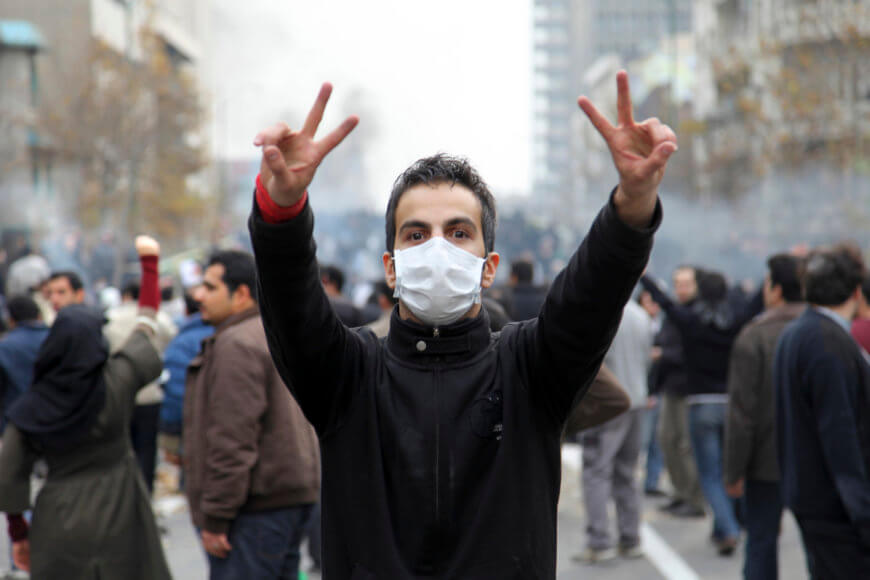 An Iranian protester holds up a peace sign. Image from Article 19, used with permission.

Written by Afsaneh Rigot and David Banisar of ARTICLE 19 [1] in a content partnership with Global Voices.

On 28 December 2017, widespread protests [2] broke out across Iran on an unprecedented scale, in what has become the country’s largest anti-government demonstration since the post-election protests in 2009.

These protests have awakened a new call for anti-corruption and transparency in Iran, opening what could be an opportunity for the government to fully implement regulations intended to support government transparency, namely Iran’s Access to Information law.

How are the 2017 protests linked to transparency?

The protests in Mahshad appear to have been triggered by government corruption and increasing prices of basic goods. The protests quickly spread throughout Iran in the following days, with messages ranging from the economic chants of “bread, land, freedom” to political opposition against President Hassan Rouhani, Ayatollah Khamenei and the Islamic Republic as a whole.

These demonstrations are set apart from the anti-government protests of 2009, with the widespread involvement of working-class people, [4] who have been hit hardest by inflation and austerity measures.

Rouhani’s new proposals in December 2017 led to cutting state subsidies – cash handouts – for 30 million people and increasing the price of fuel and eggs by 50%. This was further compounded with proposals to increase government funds to opaque religious institutions.

The protests reinitiated calls from political officials and citizens for transparency around the government's economic activities. Rouhani himself spoke out about the right to information and need for transparency in a speech just 10 days before the protests [5], where he called for greater budget transparency from the Minister of Economy and Treasury.

In short order, the first week of December saw Rouhani release details on the new national budget. This unprecedented decision functioned as a symbolic move towards transparency, by allowing citizens to see how public money is being spent.

The budget itself sparked widespread discontent [2] and is seen as a catalyst of the protests, during which screenshots of the budget were circulated through popular Telegram channels, showing cuts to subsidies and funding increases to religious institutions.

Rampant corruption and calls for institutional transparency could pave the way for Iran to fully implement its Publication and Free Access to Information Act, passed in 2009 amid corruption scandals under former president Mahmoud Ahmadinejad. Although the government has taken some steps to promote its use through online training and informational materials, the law has yet to be fully implemented. 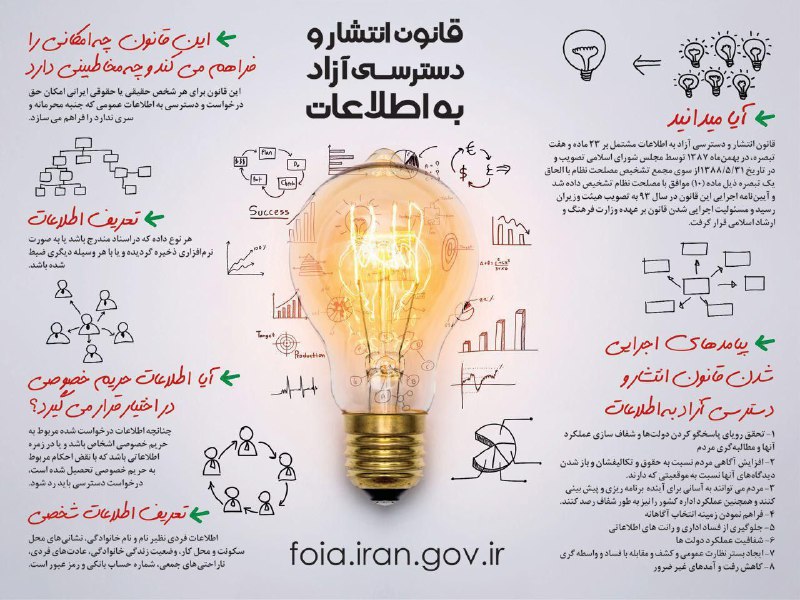 Government materials on the right to access of information. From foia.iran.gov.ir

Implementing the law could help citizens and civil society hold the Iranian government accountable for its responsibilities to the public. Beyond serving as an anti-corruption tool, it also provides citizens the right to information on key issues which affect their lives, such as the safety of local hospitals or budgets for local schools. The law also provides a mechanism for Iranians to request access to their personal records from government bodies, including medical and social insurance.

In his December 2017 speech on the importance of transparency in governance, President Rouhani said:

We have no way other than clarity for rooting out corruption; we must all go inside a glass room so that people can see every measure we take.

Time will tell if he makes good on this promise.

Learn more: ARTICLE 19 has published an analysis [6] of Iran's Access to Information law, along with tips [7] on how to make an information request.