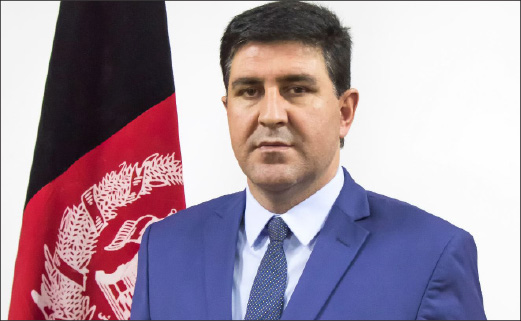 Shahzad Gul Aryoubi got off to a poor start as Afghanistan's minister of Communications and Information Technology earlier this month, stumbling through a pre-prepared speech in which he claimed the country's postal service was “1.5 million centuries” old.

The gaffe put questions about how state officials earn their positions to the forefront of debate on local sections of social media.

.@ashrafghani‘s Minister of Telecommunications & IT says “post service in Afghanistan has 1.5 million centuries history”.
Listen for yourself; he is not reading a Martian text though, it's in Farsi, Afghanistan's official language.@Murtazawi3 pic.twitter.com/Yh6EDjBlQI

Part of Aryoubi's problems were linguistic. As a Pashto-speaker, he appeared to struggle in Dari, the country's other official language and its most widely-spoken among non-Pashtun ethnic groups. Aryoubi was one of 11 out of 22 ministers approved to take up positions in the cabinet by Afghanistan's parliament at the end of last year.

During the January 7 speech, he mispronounced several words and said that postal services in Afghanistan dated back “1.5 million centuries”, before humans even roamed the earth.

Parwiz Kawa, an Afghan journalist, attacked the new communications minister, whom he viewed as barely literate.

A #NUG minister tries to read a text in an official language, and he can’t. Although he has passed a test and interview by a PhD holder president. I could fail in 3rd class of my school if I was reading this bad.

I sent an email 1.5 million centuries ago, but it's still in process. Such is the speed of Internet in Afghanistan.

A meme featuring a dinosaur-themed illustration and the minister proved a hit on both Facebook and Twitter.

In response to Mr. Minister, who said that the post service in Afghanistan is 1.5 million centuries old.

The new proposed cabinet featuring Aryoubi and others was put before parliament after prolonged talks between President Ashraf Ghani, and Chief Executive Abdullah Abdullah.

The two leaders formed a National Unity Government (NUG) in 2014 after Ghani edged Abdullah in a tense and violation-prone election, but infighting has roiled domestic politics.

The storm surrounding the speech is all the more relevant because Ghani, the best educated leader in the history of Afghanistan, ran for the presidency on a platform stressing meritocracy over nepotism.

I regret that the National Unity Government Leaders talk about good governance while appointing a minister who lacks primary literacy.

In Afghanistan, the primary literacy rate is at about 31% for the adult population. Female literacy levels are 17%, while male literacy is around 45%.

Under the Taliban, the government was spearheaded by semi-literate commanders, and Aryoubi's speech was judged by local netizens as a marker of non-progress.

Meritocracy means this; in one sentence, he makes many errors.

Their anger is understandable. Young, educated citizens, who typically dominate the conversation on Facebook, are often refused jobs with the government.

Universities across the country produce 50,000 to 90,000 graduates each year, but the government recruits only about 15,000 each year.

Deeply rooted patronage systems hold back young Afghans from occupying government posts. Ghani pledged a new political culture based on transparency and the potential of youth.

But his presidency has yielded few reforms so far and he further undermined his image as a reformer last year by appointing his septuagenarian uncle as Afghanistan's ambassador to Russia.