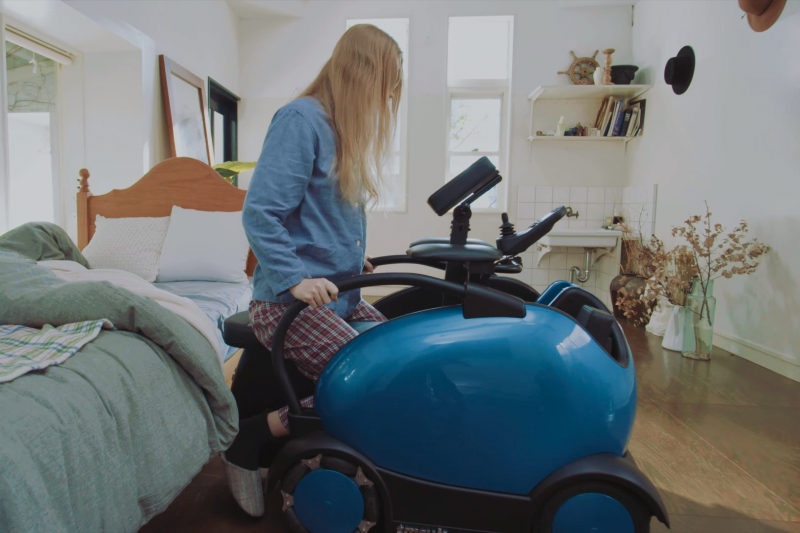 I love technology. I suppose I am what we might call in in Japan a ‘gijutsu otaku,’ (技術オタク) a person with an excessive love of technology. Maybe this comes from growing up in an era when there were still mainframes, and personal computers (PC) could at best only handle word processing or games with really bad graphics. I am also disabled, so technology is a necessity for me as well. The PC and the smartphone are now indispensable features of my everyday life, but there are also assistive devices that are both functional and cool, and robotics is an area I follow with keen interest. Driverless cars, certainly, cannot come soon enough for me.

Yet sometimes I am hesitant about particular technological developments, as technological ambition can sometimes surpass concerns about functionality. Take, for example, the recent innovation from Tmsuk Co. Ltd, a company based in Munakata City, Fukuoka Prefecture, that in mid-December 2017 produced a new type of robotic wheelchair called the ‘Rodem’. The Rodem is allegedly designed to allow the user to transfer from wheelchair to bed more easily than the longstanding ‘chair design’ wheelchair.

“The robot, “Rodem,” was developed so that the user can easily ride on the wheelchair from a bed, sofa, etc. At the time of getting on/off the robot, its seat protrudes backward and diagonally downward, and the user straddles the seat from behind. There is no backrest, but the user can lean forward to put his/her weight on the front part of the seat…The robot can be charged by using a 100V domestic power source. After being charged for eight hours, it can travel 15km or more. Its maximum speed is 6km/h.”

The device can be controlled by smartphone, allowing users to control it remotely, to bring it closer or move it further away from a bed, for example.

It's the apparent convenience and comfort that makes the ‘Rodem’ so appealing, of course. To be able to get in and out bed easily without the need for a carer, and with such a cool-looking wheelchair, that must be a good thing, right? “While conventional wheelchairs give a hug, the Rodem gives a piggyback,” said Tmsuk’s President Yoichi Takamoto, suggesting that he certainly thinks so.

A spokesperson for the Tmsuk Company also stated in an article in The Daily Mail that the Rodem was intended to “…break down the barriers facing elderly and disabled people,” by allowing for “movement to widen the users’ living area and increase their quality of life.”

A desire to break down barriers and increase the quality of life of disabled people is, of course, a good thing. Yet some in the disability community have doubts about the Rodem.

UK-based Access and Inclusion expert and wheelchair user Mik Scarlet tweeted that he was fed up with “. . . ego driven product designers telling us what we need & creating answers to problems Disabled people don't have. This won't advance accessible tech but looks good in media.”

Scarlet was equally outspoken in a conversation with me via Twitter private message. “Tmsuk Rodem chair proves designers have no idea about wheelchairs & their users,” he said. “…the bizarre concept around transferring into it indicates that very few chair users took part in the design process at all. To transfer onto the Tmsuk Rodem is much harder than the usual side transfer and there is much less support with the loss of the backrest. It works for almost no wheelchair users.”

If its purpose is to help the majority of wheelchair users, said Mik Scarlet, the Tmsuk Rodem wheelchair is simply not up to scratch. But to the media and public at large, it looks like a great idea. As an article on the tech site Engadget gushed in December 2017, “The robotic wheelchair gives you a piggyback ride that not only makes it easier to climb aboard, but puts you in a high, forward-mounted position. It's easier to brush your teeth, make breakfast or just hold face-to-face conversations.”

I am also moved to speculate about the reasons behind Japan’s interest in robotics, which might include the scarcity of staff for certain jobs. Hospital and the residential care are among the sectors in Japan that are highly underfunded and understaffed, and in areas such as customer service robotics are quite literally taking over. Now it’s mobility aids. It is all very convenient, but convenience, in this case, seems to be linked to not having to deal with human beings. That may be fine for someone trying to buy something from a shop, but not so pleasant, one imagines, for the salesperson whose job the robot has replaced.

Getting in and out of bed is one of the most difficult, yet crucial tasks a disabled person faces, and I am sure that one day a robotic device will be developed that would satisfy the concerns of Mik Scarlet and others about its physics and eliminate entirely the need for wheelchair users to depend on carers. In its present incarnation, however, the Tmsuk Rodem is not it.

It does seem as well that the Rodem is targeted at elderly people who may not have access to a carer, especially if they live in rural areas of Japan, where there is a particular need for more carers. My question then is this: Instead of developing new technologies that might prove unsuitable, why not at the very least also train more professional carers?