A Mother's Battle Against Agrochemicals, Church and State in Paraguay 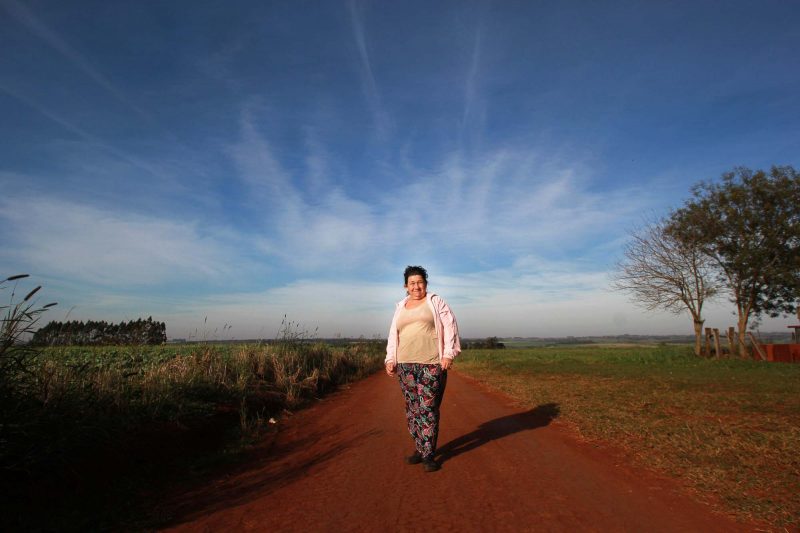 In January 2003, Petrona Villasboa and her entire family suffered the negative effects of agrochemicals, with the loss of one of their children, Silvino Talavera. Photo by Leonor de Blas, used with permission.

As a midwife, Petrona Villasboa has helped bring more than 200 children into the world alive and well, but when her own son Silvino Talavera was poisoned, she could not save his life.

In spite of this, Villasboa has dedicated herself to the fight against Paraguay’s powerful soy producers, responsible for the use of the deadly agrochemicals that killed her son. In 2004, she brought the first-ever conviction against two soy producers, in a case which proved that the cause of her son's death was the indiscriminate use of agrochemicals. Had it not been for these producers’ pesticides, Silvino would be 26 years old today.

The tragic loss of a son to deadly agrochemicals: Silvino's story

At the age of 11, Silvino was already working the land for the Pirapey soy production company in the district of Edelira, within the department of Itapúa in southern Paraguay, alongside his older brothers and his father, Juan Talavera.

On January 2, 2003, Silvino was riding home on his bicycle with his cousin, Gabriel Villasboa, having gone shopping to get lunch. Along the dusty road in the scorching heat, they saw soy producer Hermann Schlender on his tractor, spraying crops along the road. Gabriel waited until the tractor passed, but Silvino started pedaling fast and could not escape the fumigation blasts, which completely soaked his clothes and bag of food.

When Silvino arrived home, he handed the shopping bag to his sister Sofía, then 12 years old, and went to bathe in the Pirayu'i stream that borders the Villasboa's ranch, located at the end of a very steep slope. Their mother was washing clothes there, but Silvino didn’t mention the incident, only saying that his eyes suddenly began to itch. Later, he lay down in bed and did not get up to eat. By the afternoon, his situation worsened with vomiting and diarrhea.

Alarmed, Villasboa noticed that her other children were suffering from similar symptoms, and after a while, she too began to feel ill. She prepared a herbal infusion drink with jaguarete ka'a (a medicinal plant) and mandarin leaf, and administered it to everyone. But her two-year-old daughter, Patricia, started feeling worse. Villasboa took her to the nearest hospital in the town of María Auxiliadora. The hospital lacked equipment and specialists, so they all went to the Hohenau neighborhood, located 60 kilometers from Pirapey. Patricia (who was hospitalized until January 5) and Silvino both stayed in Hohenau, while Villasboa's other sons and daughters were treated at home with medication for fever and vomiting.

Silvino's body was paralyzed and bruised. In tears, Villasboa wiped her son's nosebleed. The doctor suggested an urgent stomach cleanse in the city of Encarnación (52.6 km away) and transported him there with the mayor's truck.

But Silvino suffered two cardiac arrests and died on January 7 in Encarnación. The cause of death: severe poisoning.

Nearly 20 people were affected by these fumigations. Apart from the one that Silvino cycled through, there was another spraying that affected families in the area. Residents typically live in small peasant’s houses (culata jovái), comprising two rooms with wall boards joined by a common roof, and separated by a mixed space with a roof, but without side walls — a design that makes inhabitants more vulnerable to fumigations.

Of the nine Villasboa offspring, Sofia and Patricia required hospitalization but survived the second fumigation, as did Petrona and Juan's other children: Norma, Juan Ignacio, Antonio, Darío, Juan Alberto and Justiniano. In their community, a baby of just six months and another of just over a year also died around the same time that Silvino did, but their families never filed a complaint.

Multinational corporations that produce agrochemicals call them “pesticides”. The Bayer corporation refers to them as “agricultural protectors”. For Petrona Villasboa, they're just poison.

Villasboa boldly sued the agrochemical giant Monsanto, an American multinational agrochemical and agricultural biotechnology corporation, and the world's largest producer of transgenic herbicides and seeds. Monsanto is known for producing the herbicide ‘glyphosate’ that appeared in Silvino's blood samples. In 2015, the World Health Organization classified it as potentially carcinogenic.

In Paraguay, Monsanto is the biggest importer of pesticides. It is the same company that developed Agent Orange, a herbicide and defoliant used by the United States military in the Vietnam War, which, according to the Red Cross, left a million people disabled.

Monsanto has always marketed its products as “safe” for humans. But Villasboa sued the company in 2004 for its misleading advertising in Paraguay.

Agrochemicals are necessary for soybean cultivation as part of the “technological package” brought by the Green Revolution, a Paraguayan governmental initiative that includes large machinery and transgenic seeds. For small-scale farmers, this new system causes natural degradation, starting with the soil, and is radically opposed to traditional production models.

Genetically modified organisms (GMOs) are designed to withstand fumigations that attack anything other than their shoots. Pesticides are chemical substances used in agriculture to eliminate weeds or plant diseases. The growth of transgenic crops, which already occupy 95 of every 100 hectares in Paraguay, has led to an increase in sprayed chemicals. 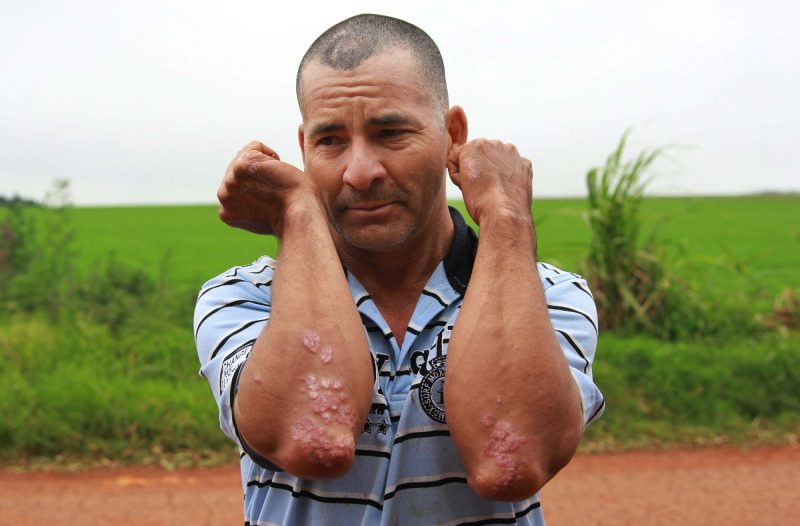 Compounds such as cypermethrin and glyphosate are used in soybean cultivation. They are known by the farmers as “kill-everything”. They produce cutaneous and carcinogenic diseases. Photo by Leonor de Blas, used with permission.

The “Justice for Silvino” campaign brought Villasboa's son's tragic death to trial. Villasboa undertook this battle with the support of the Organization of Peasant and Indigenous Women (CONAMURI); she was also joined by other groups and activists from Paraguay and abroad.

Meanwhile, Villasboa's neighbors collected signatures to demand that she desist from complaints against the soy entrepreneurs. On one occasion, a worker employed by Schlender approached her on a local road with a machete in his hand to scare her. Another time, a priest went to her ranch to persuade her to abandon the judicial process. When she refused, he excommunicated her. Villasboa has not set foot in a church since then.

The aggression did not end there. Petrona's brother, Serapio Villasboa, leader of the Paraguayan Peasant Movement (MCP), was stabbed to death by three thugs a few days before the trial began. 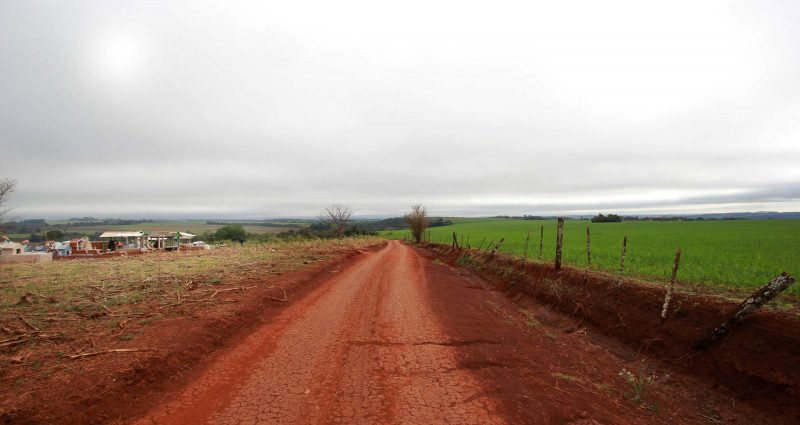 A red dirt road separates the fields of intensive agriculture and the cemetery in Pirapey. There rests the body of Silvino Talavera, whose story brings people to visit from many places. Photo by Leonor de Blas, used with permission.

In the trial investigating the death of Silvino Talavera, medical professionals testified to the exact symptoms of someone who has suffered from pesticide poisoning, and were certain that this was his cause of death. However, the court made it clear that agrochemical fumigation was not on trial, but rather the reckless behavior of the accused.

As a result, two soy producers were sentenced to two years imprisonment: Hermann Schlender for homicide and production of risks to the public, and Alfredo Laustenlager, plantation co-owner, for wrongful death. In addition, they were made to compensate the victim's family, each with the sum of 25 million Guaraníes (approximately US $4,500).

The judicial ruling in the Silvino Talavera case set a historic precedent, ushering in progress in environmental legislation. Now, soy producers must place plant protection barriers for crop cultivation and are prohibited from fumigation depending on the direction of the wind. Local ordinances and national regulations exist today thanks to the perseverance of Petrona Villasboa and those who stood by her side.