To Achieve Freedom for Iran and the Arab Nations, the Region Must Unite 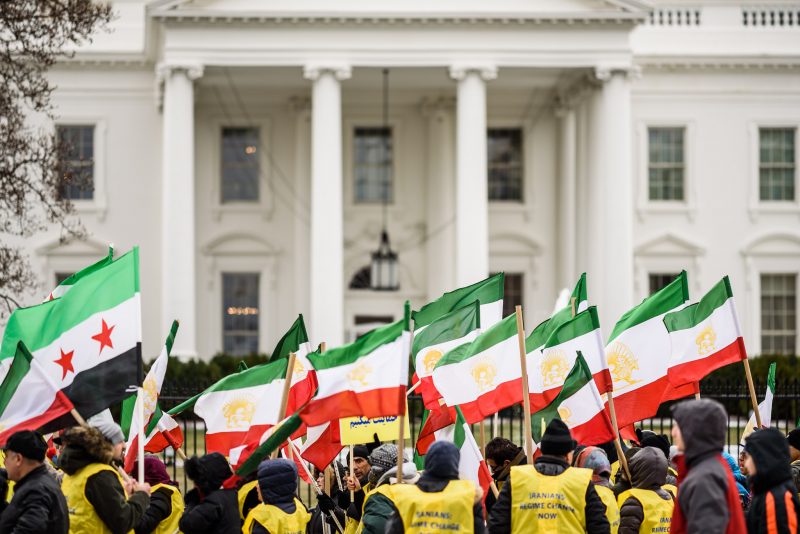 A Free Iran protest in front of the White House in Washington DC on December 31, 2017. PHOTO: Geoff Livingston (CC BY-NC-ND 2.0)

There are two remarkable features to the recent Iranian uprising. The first is that it began in the religiously conservative city of Mashhad. The second is the expansion of the insurrection far beyond the ethnically homogenous Persian provinces to the outlying regions where ethnic minorities predominate, such as Arab Ahwaz, Kurdistan, Baluchistan, and even Turkish areas in Azerbaijani territories.

The spread of the demonstrations was accompanied by increasingly bold assertions and actions on the part of protestors. In scenes rarely witnessed in the tightly controlled state, demonstrators set fire to pictures of Ayatollah Khomeini, the founder of the Islamic Republic, and of the current Supreme Leader Ali Khamenei, both key symbols of the Iranian regime. The fact that people all too aware of the grievous penalties for attacking the icons of the Islamic Republic took such risks shows the depth of the protesters’ rage.

The events have also revealed the true character of President Rouhani, and exposed his claims of moderation and reformism as nothing more than a mask concealing the nature of the masters he serves and diverting public anger away from the theocratic leadership that controls the country. The widespread public rejection of Rouhani’s regime across all sectors of the population in the latest uprising—unlike the 2009 Green Movement, Iran’s poor are participating—is evidence of the people’s disillusionment and rejection of the propaganda the regime uses to justify its rule.

Unlike previous protests, this time there is no turning back. The regime that destroyed the future for Iran’s younger generations and played a key role in the savage destruction of the entire region—that depleted Iran’s wealth and facilitated the destruction of the social fabric of nations such as Iraq, Syria and Yemen—cannot continue. The question is not whether the regime will fall, but whether it will fall before it has dragged Iran and the rest of the region into destructive chaos. Little else can be expected of a regime that delays its own demise by precipitating new crises, and which fails to meet popular demands, much in the same way as its predecessor, Shah Pahlavi’s brutal monarchy.

Instead of working from the outset to serve the Iranian people and to uphold their rights, the Rouhani government has focused on “exporting the revolution”, which is nothing more than a euphemism for the incitement of bloody sectarian conflicts in the region in order to divide the population and seize control. Despite speeches and slogans about “resistance” and professed support for the cause of Palestinian freedom (in reality a cynical exploitation for the purposes of self-aggrandizement), Tehran’s regime has, in practice, “resisted” nothing but Iranians’ and others’ freedom and human rights.

After four decades of the Islamic Republic, half of Iran’s population lives below the poverty line. It is clear to the people of Iran that the ayatollahs have nothing to offer, either to Iranians or to the people of the neighboring countries. Before the revolution that overthrew the Shah’s brutal, corrupt regime, Khomeini promised to free the country from dependence upon oil and gas exports. 39 years later, the Iranian economy, under the control of another brutal corrupt regime, is even more dependent upon international sales of oil and gas.

The clerical regime never had any more to offer Iranians and the countries of the region than bombastic slogans and equally empty chants of “Death to America” and “Death to Israel”. Khomeini and his successors have done nothing to hurt either Israel or the United States. America has not died. On the contrary—its superpower status remains uncontested, and it is watching closely as Iran spreads misery. American power in the region has not been hurt by the spread of sectarian militias—in fact, it’s quite the opposite.

Rhetoric aside, the US and Israel are in fact quite comfortable with Iran’s regional expansionism. The US’s regional footprint and ability to intervene directly in the region have grown, even as Tehran’s regime boasts of its regional supremacy and its ability to implement an expansionist policy. Israel, meanwhile, has never been more confident. 39 years after Iran’s leaders severed relations, Israeli settlements in the occupied territories are expanding rapidly and Netanyahu is now preparing to annex all of Jerusalem. The Palestinian people’s right to self-determination is in greater peril than it has been in decades.

And what can be said of the Iranian leadership’s loud boasts about its ability to intervene in Arab countries? What sort of boast is to have spent tens, if not hundreds of billions of dollars, while your own people starve, on driving countries such as Syria, Iraq and Yemen into desolation, destruction and ruin? The regime’s actions have reduced Syria to a pile of strife-torn rubble under the continuing rule of a genocidal dictatorship which, like the mullahs, has restricted its “resistance” to periodic bombastic speeches while reserving its weapons for use against its own people. Yemen is bitterly divided and in ruins, in part due to the Iranian regime’s influence. In Lebanon, at the direction of the Iranian regime, Hezbollah has brought the country’s progress and development to a halt, with the group’s 2005 assassination of Rafik Hariri—sponsored by Bashar al-Assad—offering a clear indication of the extent to which Tehran and its proxies have violated Lebanese sovereignty.

The “revolution” exported by the Iranian regime has also forced the Arab Gulf states into a defensive position, pushing them closer to the United States and Israel. After decades of the Iranian regime’s exported revolution, Arab citizens no longer dare to be optimistic about the prospect of achieving sovereignty or even fundamental democratic and human rights. Our Arab brothers and sisters, therefore, have found new optimism in the uprising of the Iranian people.

Ethnic minority activists in Iran, however, are painfully familiar with the brutality of the Iranian regime and would counsel our Arab brothers and sisters to temper their optimism. The regime will stop at nothing to preserve its grip on power. Yet, it is clear that the mask has been torn off the ayatollahs and that Iranians are wholly disillusioned with the regime. It may be reckless to speculate about the fall of the Iranian regime, but there is no doubt that it cannot continue ruling as it has done for the last four decades. Even the lifeline provided by the Obama administration, which gave Iran a free hand in the region by exclusively negotiating the nuclear development program—at high cost to Iraq, Syria and Lebanon—has been frittered away. The songs have been sung, now the bill must be paid.

And the bills are coming due. Iran is teetering on the brink of bankruptcy. Much like the Soviet Union before it, Iran is collapsing internally as a result of its attempts to exert regional military power. The similarities do not stop there. The Soviet Union was also torn apart by ethnic minorities no longer willing to bear the brunt of the economic costs of supporting a corrupt totalitarian state.

The task before Iranians is to bring an end to the crisis, to unite with our Arab brothers and sisters to overcome the damage wrought by the regime, and to join with the ethnic groups such Ahwazi Arabs, Kurds, Baluchis, Turks, and Turkmen in their struggles for self-determination. United, we can rebuild the region and save all our peoples before the Iranian regime drags us all over the precipice into a chasm of sectarian bloodletting and chaos.

Rahim Hamid is an Ahwazi Arab freelance journalist and human rights advocate who mainly writes about the plight of his people in Iran.