State of Emergency Over Worsening Crime Has Some Jamaicans Relieved — But Is It an Effective Approach? 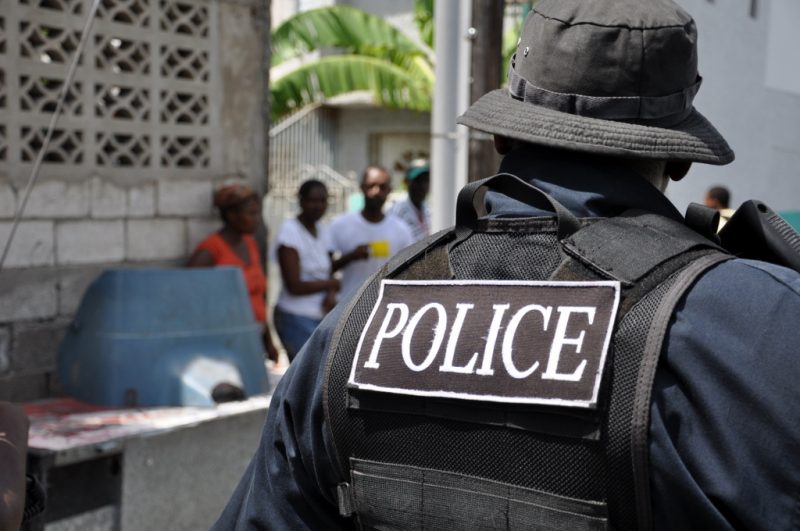 A police officer makes his rounds in Tivoli Gardens, during Jamaica's 2010 state of emergency. Photo by the BBC World Service, CC BY-NC 2.0

For the past year or so, as the island's murder rate has burgeoned, Jamaican netizens have been fixated on one topic: violent crime.

Murders soared to 1,616 in 2017 — an increase of just over 20% from the year before. Moreover, only 29% of murders were “cleared up” (the local term for a suspect being arrested or killed). The Police Civilian Oversight Committee, an advisory body, recently stated in a radio interview that the murder conviction rate has been steadily declining, from a dubious “high” of 18% to a mere 6%.

It was against this backdrop that Prime Minister Andrew Holness announced a state of emergency for the parish during a January 18, 2018 press briefing that was streamed live on social media. The declaration was made under Section 20 of the Charter of Rights and Freedoms (Constitutional Amendment) Act, 2011.

The state of emergency is a joint police/military strategy, with the national reserves being called out, and additional troops being deployed to the area. While details will be revealed in the regulations to be tabled in parliament on January 23, 2018, the police have already announced a “zero tolerance” approach, announcing that various types of businesses must be closed by certain times — including community recreational areas, which must be closed by 6 p.m.

Under the declaration, members of the security forces may stop and search individuals on the street, search places and detain people without a warrant, and curtail the operating hours of businesses. In addition, motorists using roads leading in and out of St. James will be subject to vehicle and personal search. There will also be joint static and mobile patrol in the community, leaving no doubt that the state of emergency will have a dampening effect on the free movement of citizens.

Prime Minister Holness was careful to clarify the boundaries in his opening statement at a press briefing:

Under State of Public Emergency, the security forces will have extraordinary powers and some rights are suspended. This does not mean that the use of these extraordinary powers can be arbitrary or are beyond review. The declaration of a State of Public Emergency does not mean the suspension of the rule of law. The security forces are expected and have been directed to treat citizens with respect and protect the dignity and safety of all.

Clearly the operations which will be conducted, though directed at criminals and their facilitators — I want to repeat that, the facilitators of criminals — will create some level of general discomfort. We ask the public to cooperate with the security forces.

Officials at the press briefing urged citizens to assist in the search for weapons and wanted men. In support of this effort, a hotline will be manned by the Jamaica Defence Force.

None of this came as a total surprise. Earlier in the day, media speculation was rife that such a measure was in the works after an early morning security operation began in several communities in St. James.

And in a speech the evening before, which he shared on Facebook, the prime minister had hinted at “firm and resolute measures” to curb crime:

It is the emerging view, that now is the time that the Jamaican government should take firm and resolute measures to tackle crime. Measures that are within the context of the law, the preservation of human rights and the dignity of life.

We have reached the point where we are now prepared to take these measures to ensure that this crime monster does not destabilise the promising future that is in store for Jamaica.

‘A nation at war with itself’

The Holness administration's decision to declare the state of emergency comes after growing criticism, anxiety and impatience among Jamaican netizens, opposition politicians and the private sector — expressed continuously on social media since the start of 2018 — over the crime situation.

Jamaicans have posted with growing frequency about their fears, with some recording frightening experiences and posting in distress over the murder of friends and family members:

Every community with gunmen know who and where they are…women praying church 8 days a week know their sons are criminals, police KNOW their names and locations…and all we make are excuses for not doing anything…well accept the murder rate and funeral home profits

Others have despaired at the apparent normalisation of crime in Jamaican society:

We cannot continue to talk about the 1600+ people who were murdered in 2017 in such a callous manner. I hardly hear concern when they make mention of this frightening reality. It's nothing to use to score points. Let's find a different approach. Please.

On the same day as the state of emergency was declared, a guest preacher at the National Prayer Breakfast, an annual event attended by political, religious and business leaders and covered heavily by mainstream media, described Jamaica and its crime problem as “a nation at war with itself”.

As a result, there was quite an air of relief after the news broke, and traditional media are reporting initial support from St. James residents and the Jamaican public.

Long overdue and I do hope it will be effective. Limited #StateofEmergency may be needed more often to control our crime problem https://t.co/2on6mvTx2I

On the first day, a high-powered weapon was found:

Does a state of emergency miss the root of the problem?

However, it wasn't all cheerleading. Some criticised that this state of emergency, which has the support of the tourism sector, as well as “qualified support” from the Opposition, took too long to materialise. Attorney and talk show host Clive Mullings tweeted:

I remember calling for a limited state of emergency in St James over a year ago. I repeated it on All Angles and the Mobay Chamber and Tourism interests rejected it. Now a murder near the airport has become the catalyst.

Other Jamaicans suggested that the emergency measure didn't get at the root of the problem:

I wonder if people realise that if we don't do something about the visible social & econ #inequality in StJames, we're going to need permanent #StateofEmergency ? Luxury hotels alongside urban squalor leads to resentment>hopelessness>anger>cynicism>violence #RJRBTH

Social inequalities are especially noticeable in the tourism centre of Montego Bay, where most major hotels have moved from the city centre to the so-called “Elegant Corridor”, a stretch of main road fringed with golf courses, manicured landscaping and beachfront all-inclusive hotels. In stark contrast, the town centre itself is congested, and — thanks to the poor infrastructure of growing squatter communities outside the town — suffers from environmental degradation (hillside soil erosion was one factor causing major floods in the town in November 2017).

Finally, there is the spectre of past states of emergency — six in total. The last one, which took place in 2010 as part of the effort to arrest West Kingston “don”, Christopher “Dudus” Coke, on an extradition warrant, worried human rights groups: during the security operations, at least 72 Jamaicans lost their lives and about 35 more were wounded. It was the highest number of casualties in a single incident since the brutal suppression of the Morant Bay Rebellion of 1865.

It also raised serious questions about the power and trustworthiness of the police and armed forces, and whether a line was crossed as they sought to maintain law and order.

Will the current state of emergency be expanded? At the press briefing, the prime minister refused to divulge how long it would be in place, ostensibly for security reasons. Will it even be effective, if the root of the crime problem is not addressed?

At this point, many Jamaicans seem prepared to wait and see, and are relieved that at least some action has been taken in an attempt to curb crime.