Is Taiwan a Country? What About Tibet? China Says They Aren't—and Wants Foreign Companies to Fall in Line 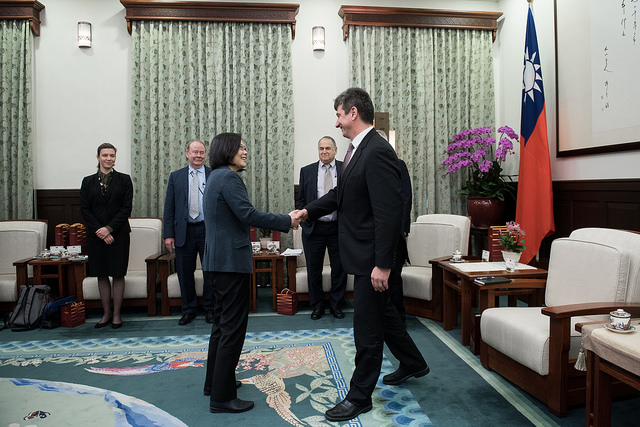 Taiwan has been trying to establish bilateral relations with other countries under President Tsai Iingwen, pictured here shaking hands on January 9, 2017 with Director Michael Szony of Harvard University's Fairbank Center for Chinese Studies. Photo from the Office of the President of the Republic of China.

Despite what people may say, Hong Kong, Macau, Taiwan and Tibet are not countries. At least not in the eyes of mainland China.

This week, a smattering of multinational corporations publicly apologized for listing Hong Kong, Macau, Taiwan and Tibet as countries on their websites, at the behest of Chinese authorities.

The wave of apologies from JW Marriott Hotels, Zara, Delta Airlines and Medtronic, among others, was sparked by a January 9 email questionnaire sent by Marriott to its Chinese members, in which the four territories were listed separately from China in one of the questions about residence.

Objectively, whether or not these places are considered countries may depend on one's definition of the term. The western Himalayan region of Tibet came under China's rule in the early 1950s. A vocal movement advocating independence for the region, which is home to one of China's largest ethnic and linguistic minorities, has led to notoriously high levels of police surveillance and population control measures there.

Taiwan has been a self-ruling political entity since 1950, but China claims the territory and has used its influence around the world to isolate the Taiwanese government. Hong Kong and Macau fall under a legal designation of “special administrative regions” of China. They maintain a high degree of autonomy from the mainland — a condition that has come increasingly under threat in recent years. All three places — Hong Kong, Macau and Taiwan — have their own executive governments.

The news went viral after a screen capture of the Marriott questionnaire was posted on Chinese social media platform Weibo and several social media news outlets covered the story. The hotel quickly withdrew the questionnaire, but it was too late. A mainland Chinese reporter from The Paper reported that that the hotel chain's mobile app had also separately listed the four as countries in its user registration.

Two days later, officials from the Shanghai Cybersecurity Administration told the management of Marriott Asia Pacific that its questionnaire and user registration had violated Chinese law and hurt Chinese people’s feelings, and ordered its website and app to be shut down for at least a week as punishment.

In response, Marriott issued three public apologies on Weibo between January 9 and 11. Below is the English version of its apology posted on Twitter on January 11:

But on the Chinese web, its apologies were widely considered insincere after a Chinese media outlet spotted that the Marriott’s Twitter account @MarriottRewards had “liked” a tweet about the story that was posted by a Tibet separatist group.

As online “patriots” continued to attack Marriott, a number of domestic companies were forced to cancel their banquet reservations in Marriott hotels in China. Online hotel reservation sites also removed Marriott hotels from their search. Arne Sorenson, the chief executive of Marriott International, apologized again in a public statement.

On the same day, the Civil Aviation Administration of China (CAAC) demanded that Delta Airlines apologize for listing Taiwan and Tibet as countries on its website and mobile app. The next day, Delta did just that.

Party-loyal Chinese netizens have since gone on the hunt for other multinational corporations listing any of the four entities as separate countries. Thus far, 23 other international airlines have been reported for listing Hong Kong, Macau and Taiwan as countries.

Foreign brands like Christian Dior, Cartier, Hermes, Burberry and Armani have been flagged for the same issue. Even the popular Huajiao video streaming mobile app, a domestic Chinese company, was singled out for making the same “mistake.”

On Weibo, most comments have expressed nationalistic sentiments against multinational corporations, such as the following found on a news thread on state-owned CCTV's account:

Should crack down on these immoral foreign corporations which crush Chinese rice bowls after eating our rice.

It seems that foreign separatist forces have penetrated China, including the hotel and airline sectors.

Officials from different industries should have a full check-up. Sovereignty cannot be compromised.

Some have called for more punitive action. A user by the name of “West Crusade” said:

State sovereignty and dignity should go beyond asking the immoral foreign corporations to self-censor, correct mistakes and apologize. The corporation are not ignorant of the law as they are well aware of China’s principles regarding its sovereignty. They are not blind but playing political tricks. We have to be more proactive and address the problem through diplomatic and legal means.

‘It is a de facto separate state from China’

Outside the “Great Firewall of China” (a colloquialism referring to domestic censorship measures), the incident triggered spats between mainland Chinese, Hong Kongers and Taiwanese on Facebook, with the latter two pointing out the many ways in which Hong Kong and Taiwan operate separately from China.

Below is a selection of comments from various news threads. First, from Taiwan:

Taiwan has its own constitution, government, army and legislature. It is a de facto separate state from China. It is a joke to force people to be part of China with five-star-national-flag-waving and a few thousand people pledging loyalty. People in China only have a resident identity card, they are just residents [not citizens].

Forcing foreign corporations to perform unjust acts in the name of state, this defines how low you are.

We have to be serious in building a consensus among the international business sector on the “one China principle.”

In the past [China and Taiwan] were in one family and had tolerance. Now, Taiwan independence has become the agenda and that’s the beginning of a new game. If you want independence, go to the US and Japan. There is no space for you in Chinese people’s territory.

From now on, let’s attach China to all Chinese regions. For example Shenzhen China, Shanghai China, Beijing China, Guangzhou China, Dongguang China. Or else, China will get angry.

Just to remind everyone, the following are international country calling codes:
China–86, Hong Kong–852, Macau–853, Taiwan–886
Such hard evidence, split up the motherland.

Should boycott Taobao, its domestic mailing service does not include Hong Kong. It means Hong Kong is independent!!!

And on Twitter, former US ambassador Curtis S. Chin summed up China's reaction to the whole incident with a meme of a destructive panda: