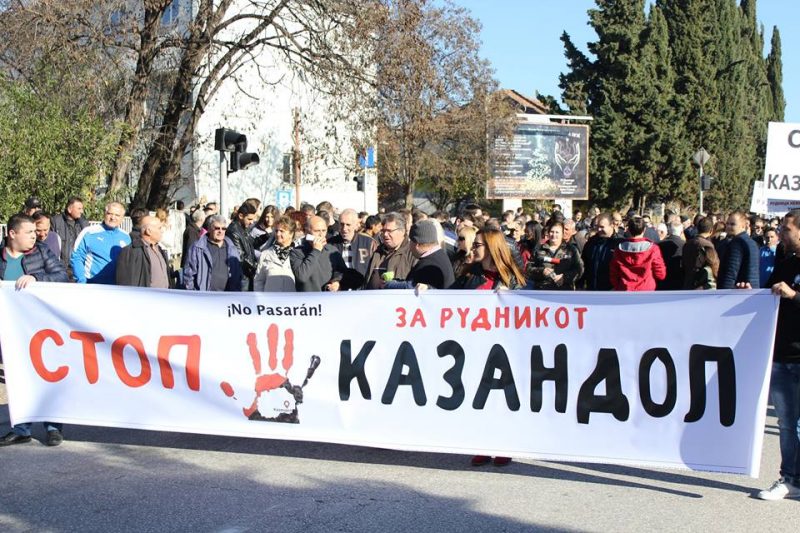 Copper Investments JSC (COPIN), a Ukrainian-owned mining company, has partnered with Sardich MC in Macedonia with plans to mine for gold and copper in Macedonia's most fertile agricultural heartland. Just one kilometer from the nearest inhabited village and four kilometers from the nearest town, citizens worry that the mining will wipe out entire livelihoods and poses severe environmental risks to the health and well-being of communities in south-eastern Macedonia. 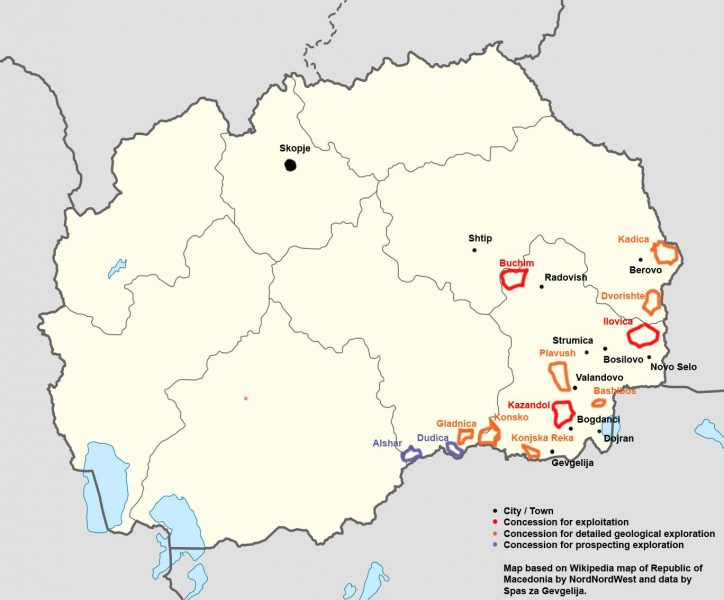 Map of new mines in the south-east of the Republic of Macedonia including locations mentioned in this post. Based on Wikipedia map of Macedonia's Planning Regions by NordNordWest (CC BY-SA 3.0) and data by Spas za Gevgelija initiative. Click to enlarge.

In a single day in 2012, COPIN (through Sardich MC) secured three mining concession signatures out of a total of 86 signed by the former Macedonian government, under the right-wing political party VMRO-DPMNE. This party ruled from August 2006 to May 2017 and credible allegations of massive corruption played a major part in its downfall from power.

All 86 mining concessions are located in south-eastern Macedonia, a bastion of fertile lands with inhabited cities and villages where the local population lives off agriculture and serves as the majority provider of fruits and vegetables in the country. 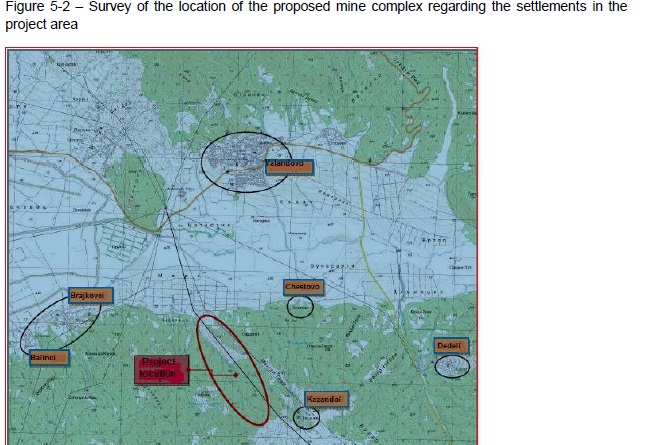 The location of the proposed mining complex and related settlements in the area, Environmental Impact Assessment for mine complex Kazandol prepared for Sardich MC Skopje, by the Consultant’s Firm EMPIRIA EMS, Skopje. This is a public document under the Aarhus convention.

Out of the three mining concessions, the Kazandol copper and gold mine is currently in the last phases of construction and is prepping to begin exploitation. So far, locals have voted ‘yes’ or ‘no’ to the mines in six referendums, organized in regions affected by the mining operations.

An overwhelming majority voted against the mines while other areas had low voter turn out or could not reach the necessary consensus vote. The small town of Gevgelija saw the first successful referendum with over 13,000 people who voted against the mine while only 154 showed support for it. In the small town of Valandovo where many protested the mines, its referendum ultimately did not reach the necessary census to make it legitimate, with 300 missing votes. 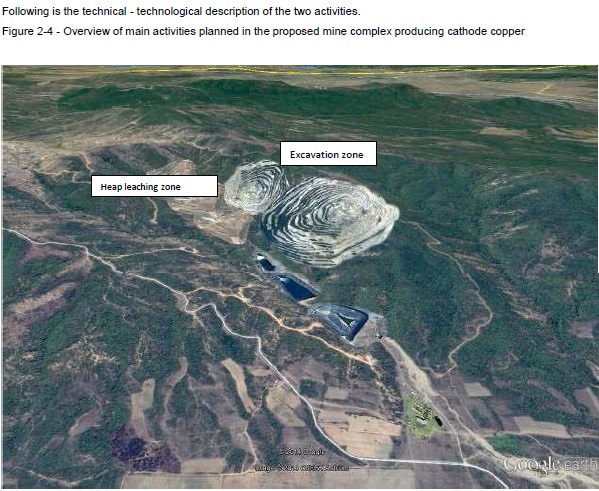 Overview of the main activities, Environmental Impact Assessment for mine complex Kazandol prepared for Sardich MC Skopje, by the Consultant’s Firm EMPIRIA EMS, Skopje. This is a public document under the Aarhus convention.

The Kazandol mining complex will span across 287 hectares of land now covered with forests and shrubs. Ore mining will be carried out by open-pit method. Digging of the mine will be done by blasts and explosions and the copper and gold will be separated from the rock using on-site pools with sulfuric acid. The Study on Environmental Impact Assessment: Mine Complex Kazandol, Valandovo, Macedonia clearly states:

The heap leaching of the raw mineral shall be carried out in a dump of the excavated copper ore. The technology that shall be used for obtaining the final product – electrolytic (cathode) copper, is based on the use of low concentration (0.5%) solution of sulfuric acid-heap leaching solution, which shall be sprinkled (sprayed) on the surface of the dump. Crossing through the deposited raw mineral on the dump, the solution dilutes a part of the copper from the ore and runs from its lower part.

Three sulfuric acid tanks each with 270 cubic meters will exist on the site along with an organic diluents reservoir. The study presents harmful results such as air pollution from acid fumes, dust emissions from mining activities and emissions of gas from trucks and cars associated with the complex. This was illustrated on 13 December 2017 when Sardich MC ran test blasts on the Kazandol mining complex.

Tweet: This is how the first blasting looked like, only few meters from the first houses of the villages of Kazandol and Brajkovci. #StopForKazandol
Video captions: First blasting at Kazandol Mine. 4-5 such explosions are planned on daily basis during the next 15 years. Stop the construction urgently! Stop for the mines of death!

We have given out mining concessions on top of water springs to dig out an insignificantly small amount of gold. Someone has decided to poison us with arsenic, sulfuric acid and cyanide. Ten to twenty tons of cyanide will be used in these mines. Hitler used only seven tons of cyanide for killing people with fumigation in Aushwitz.

Activists speak out against mining Macedonia's most fertile lands

The Kazandolska River and Anska River cross at the Kazandol mine complex and the area is famous for growing Mediterranean and organic fruits such as pomegranate, apples, peaches, cherries, figs and the rare Japanese apple. Just 45 kilometers from the Kazandal site, the Ilovitsa project, another mining prospect, sits on top the mountainous region of Strumichko Pole, the main source of fruits and vegetables in Macedonia. 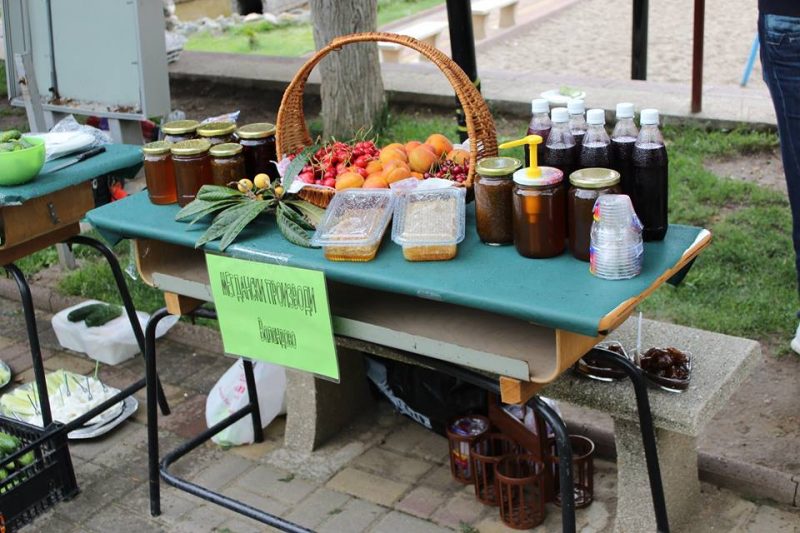 The Citizen Initiative Spas za Valandovo (“Salvation for Valandovo”) founded by activists from Valandovo, a city located just four kilometers from the Kazandol mining complex, spoke loudly against the mine operation. They organized two road blockades and several events to show authorities they refuse to allow mining to destroy their homes and lives:

#СпасЗаВаландово is back on the streets 2 demand IMMEDIATELY EFFECTIVE MORATORIUM on #KazandolMine! In the last month, the investor has been wreaking havoc in my community. @VladaMK & PM @Zoran_Zaev – we need you to step up your game.https://t.co/mpk1iCpBL3 pic.twitter.com/V1SFDV6d09

At the end of 2017, the former ruling party VMRO-DPMNE that signed the mining concessions held a congress in Valandovo. Locals offered them fresh drinks made with sulfuric acid to show their revolt:

They say the murderers always return to the scene of the crime. This happened in Valandovo when those who brought us #MinesOfDeath came to visit today. We used this opportunity to offer them environmentally friendly drinks with sulfuric acid. #StopForKazandol

In 2017, the Center for Environmental Research and Information Eko-svest, a leading environmental NGO, met with Macedonia's new Prime Minister Zoran Zaev to demand a cumulative strategic environmental assessment for all 86 mining concessions.

During local elections last year, Mr. Zaev promised that his government will stop the construction of the mines. Zaev himself lives in Strumica, a region most affected by the mines. However, he also stated that this can't be done immediately because the government first needs to ensure that the cancellation of concessions will not cause huge financial damage to the state on account of contract penalties. 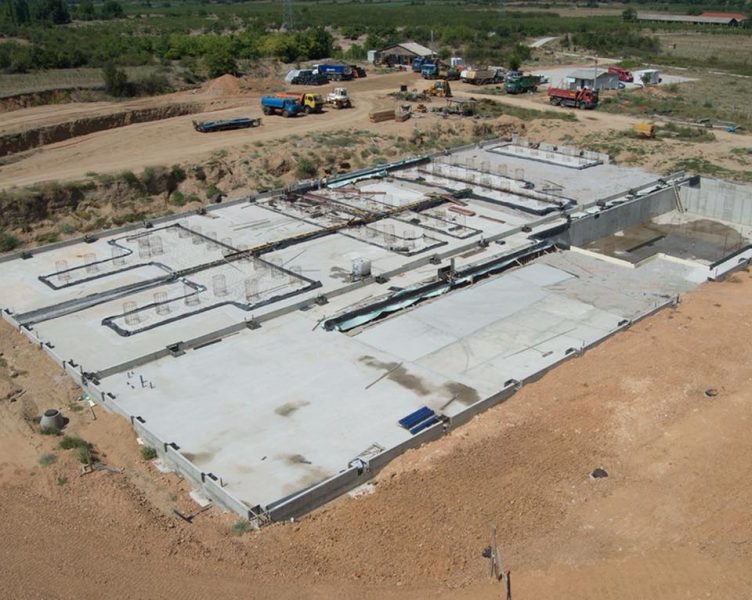 Construction of Kazandol Mine. Photo by Spas za Valandovo, used with permission.

Despite protests, the construction of Kazandol Mine complex continues and is now in the last phases of preparation to begin the exploitation.