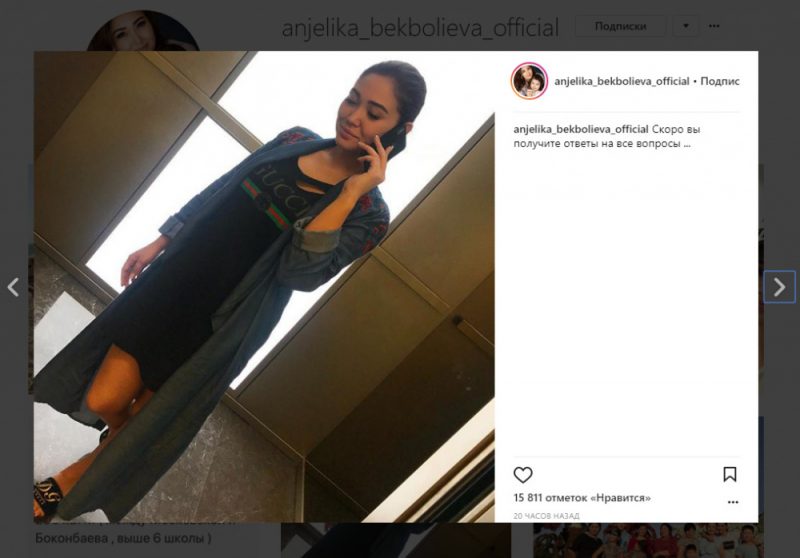 Screenshot from Anjelika Bekbolieva's Instagram account posted in an article [1] by Kyrgyzstan media outlet Kaktus Media. The caption on the post reads: “Soon you will have an answer to your questions.”

In Central Asian neighbours Kyrgyzstan and Kazakhstan, Instagram offers a fast track to fame. At times, the popular social media service can offer an even faster track to infamy.

Presently, news websites in both former Communist countries are bogged down with scandals involving local celebrities and Instagram.

In Kazakhstan, 2017 ended with news surrounding the arrest and subsequent release of Aizhan Baizakova, 22, a model-cum-dancer billed by local media as a provocative “Star of Instagram”.

She was jailed on December 26 after she and others undressed at a raunchy party captured on video in Zakova bar, a nightclub in Kazakhstan's former capital Almaty that has since been closed by its owners.

In Kyrgyzstan meanwhile, popular singer Anjelika Bekboliyeva (741,000 followers) took to the platform earlier this month to defend herself amid allegations of husband-stealing in a post she later deleted.

According to Kyrgyz media outlet Kaktus.media, [1]the post read:

Soon (readers) will receive an answer to all questions. And a lot of correspondence (belonging) to a crazy mama who is trying to shake her husband down for money. What kind of mother are you Aijana? Before spreading ridiculous slander, you had to use your children as a prop. Do not make yourself out to be married and decent! You've made a porridge (lit. a mess) that is untasty and full of lumps!

Unlike Bekboliyeva, who has used Instagram to substantially boost a pre-existing public profile, Baizakova was an unknown before she set up her account on the service this year.

The model and dancer made up for lost time, posting revealing pictures and videos [4] as well as provocative posts that attracted ire and admiration in equal measure.

The charges on which Baizakova was arrested [5] and imprisoned — “carrying out of an event in a public place in violation of norms and ethical rules” — are vague.

Kazakhstan has plenty of strip bars, after all, while Baizakova said police told her she was arrested for swearing while emceeing the event at the Zakova club.

Zakova itself was shuttered as owners came under pressure [6] from conservative, male protesters shortly after footage from the so-called “nudity contest” ended up online.

Baizakova, however, is unbowed, attracting even more interest after starring [7] in a music video released by the popular boy band Alem.

Posted onto YouTube on January 10, the video already has close to 700,000 views.

The Daily Mail is watching

Up until recently, the Daily Mail's Central Asia coverage was largely dominated [8] by Gulnara Karimova, the glamorous 45-year-old daughter of Uzbekistan's late President Islam Karimov. But with Karimova believed to now be in jail in Uzbekistan — or at minimum firmly cut off from the world of social media — the Mail has begun to cast its net elsewhere.

One article [9] published last year “Student nicknamed ‘Kazakhstan Barbie’ hits back at her Muslim critics online as she shares VERY racy snaps showcasing her tiny 22-inch waist” [9] covered the story of a young woman “flaunting her perfect body in sexy lingerie” on Instagram.

The article lacked nuance, failing to mention the fact that while Kazakhstan is a majority-Muslim country, women in the country's major cities are generally able to dress as they wish. 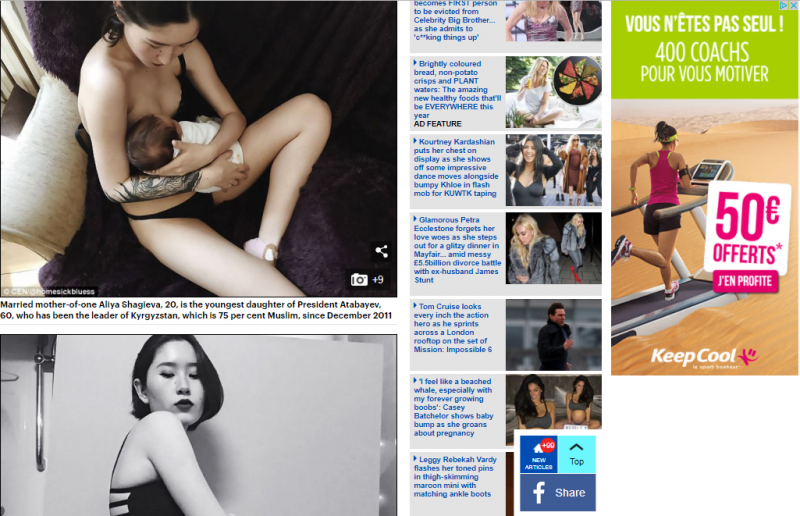 The Daily Mail's take on the Aliya Shagiyeva Instagram breastfeeding scandal irritated many in Kyrgyzstan. Screenshot from the Daily Mail website.

Months later another Daily Mail article “Kyrgyzstan's president's daughter is accused of ‘shaming’ her family by sharing breastfeeding photos in the 75% Muslim country” [10] caused anger in Kyrgyzstan for its implicit suggestion that there is a taboo there surrounding breastfeeding in public — there isn't.

Thankfully, Instagram in the two countries is not all sex, lies and videotape. Two Instagram accounts worth following for their sheer creativity and entertainment value are @eldana_foureyes [11] (Eldana Satybaldieva) in Kyrgyzstan with 570,000 followers and @territima [12] in Kazakhstan with close to a million.

In addition to regaling social media users, both accounts have translated online fame into commercial revenue through advertising.

Territima, a Kazakh comedy troupe based in the capital Astana, has been particularly successful going commercial.

Toyota is one big sponsor they have claimed in recent times, alongside several local internet companies. The Territima brand is also fronting a new flower shop and hip cafe in Astana.

One of Eldana's first forrays into advertising proved controversial, however.

In a commercial released in March 2017, Eldana is snatched from the street by a group of men and driven off in an unknown direction.

Initially, she resistes the “bride-kidnapping” attempt and threatens to have her assailants jailed.

But when she reaches the kidnappers’ family apartment, an “elitka”, or elite block of flats built by the Cap Stroy KG firm, she changes her mind, and decides she has married fairly well after all.

The shock advert proved a hit with many in a country where thousands of Kyrgyz girls are kidnapped for marriage every year. But it disappointed Eldana's liberal fanbase, which delights in her geeky, light-hearted, one-to-two minute sketches focused on everyday life as a young person living in Kyrgyzstan.