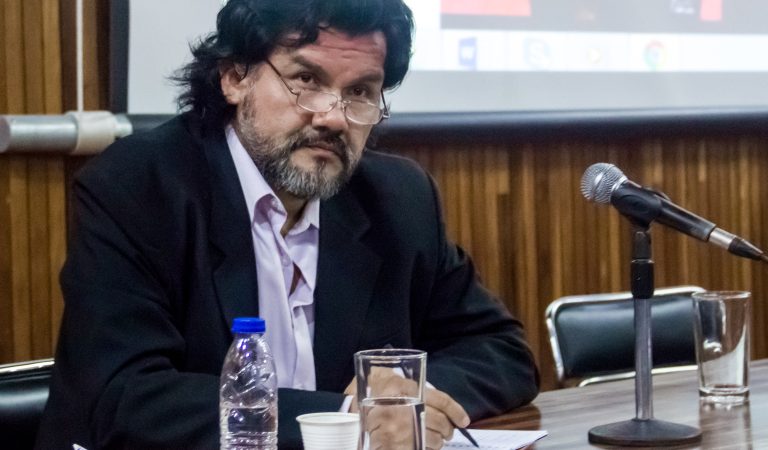 From 1990 until 2000, Peru was under the authoritarian right-wing rule of President Alberto Fujimori. About 2,000 kilometers away in Venezuela, leftist President Nicolas Maduro has held an ever-tightening grip on power in his country since 2013.

Javier Torres sees many similarities between the two, even if they occupy different ends of the political spectrum. Torres is director of a non-governmental organization called Servicios Educativos Rurales (Rural Educative Services) and a political analyst for Poder magazine and the Lamula.pe website.

In 2012, when the trial against Fujimori began for human rights violations, he was executive secretary of the National Commission of Human Rights, where he promoted a legal strategy and citizen mobilization to bring Fujimori to justice.

The following is a re-edited version of an interview with Torres conducted by Rafael Uzcategui with support from Daniel Klie during the Summit of Human Rights Defenders in Caracas that took place in late 2017. It is published on Global Voices with his permission.

Rafael Uzcategui (RU): What are the main similarities between the Nicolas Maduro and Alberto Fujimori governments?

Javier Torres (JT): There are several. In order for a country to be democratic there must be separation of powers, a free press, and free elections. There are other elements, but these are fundamental. Both in Fujimori's Peru and in Maduro's Venezuela, no separation of powers exists. The emergency laws that are executed, as much as the changes or violations that these rulers make, form the scene of a dictatorship, there is a distinct similarity.

The second has to do with the subject of freedom of expression, which is a factor one has to consider under certain conditions. Elections do not guarantee that a democracy exists if the electoral system does not comply with the minimum laws it must have to function – electoral calendars, for example. An electoral system must be standardized and not be subject to vagaries of the executive role, which is happening in Peru a little and is also what one sees taking place in Venezuela. It seems to me that what they have is a dictatorship like the one we suffered under.

RU: Have you encountered resistance among social movements, particularly in the Southern Cone, against classifying the Fujimori government as a dictatorship?

JT: Dictatorships not only learn but are sophisticated in their methodology. In the Peruvian case, due to having characteristics of a privatization goal, there was no resistance at the beginning. Fujimori had the Congress closed and then held an election where fraud allegations were raised. Then the Constitutional Court intervened the following year. Even as early as 1990 or 1991, what we have in Peru is the building of an action that will reaffirm that blow: The Fujimorist aim was a totally anti-political appeal, absolutely against the search for compromise. It was an approach based upon denouncing politics as useless, that democracy doesn't work so we must be pragmatic. That started to justify the act of privatization.

There wasn't a big debate in Peruvian civil society about the dictatorship as it formed, which could be Venezuela's case too, but I think a lot has to do with how [Venezuela's] regime is viewed from outside. Other countries see it as a leftist government that has generated social platforms. That's where the problem arises, the ideological activity is generating a kind of resistance to call it a dictatorship.

RU: There has been a debate in Venezuela about how conflict resolution should unfold: transition by collapse or transition by resolution. In Peru's case, how did the incumbent coalition break down?

JT: In Peru's case, a transition came near the end of the regime because there was a collapse. [It is true that] as early as 2000 a dialogue table had already been in place [but it was because of allegations] of election fraud in the past. However, around the beginning of Fujimori's third term, most popular mobilizations were neutralized, mostly because of exhaustion.

RU: According to what you've said before, another key moment in Fujimori's fall was the loss of the popular support he had had in his first years in power.

JT: There was a moment in his electoral campaign, for the first time in that whole decade, where Fujimori began to be rejected by a few localities. No one would have dared to hold an opposition demonstration before. The important thing is that it wasn't pre-planned, everything was unfolding spontaneously. “Fujimorism” was wearing out. These kind of regimes refuse to leave though an electoral way. They are so steeped in corruption that they have to stay in power.

RU: If you are convinced these authoritarians cannot be removed by elections, is there any reason to participate in processes organized under unfair conditions?

JT: That is a matter of debate, because these processes can legitimize third parties that could be fraudulent, but they understandably attract people's attention. People may not go to vote, but they are attentive to what is happening. Elections can be a kind of sounding board, so some participate to voice their part. But when you understand the logic of abstention, you realize it is always very difficult to achieve a total abstention from a whole political force. That way, the non-participation of some gives opportunity to others.

The other thing is that every empty seat is occupied. If an empty seat is left open to the regime, then the regime will sweep everything. People don't always necessarily see any of it beforehand, they only see the fraud afterwards, when they see the evidence. It is a subject that is seen after its happens.

RU: Because of the nature of conflict, mechanisms of dialogue should be promoted. How can this be done in adverse situations?

JT: There comes a time when those political parties perceive their own lack of legitimacy and accept that a civil society organization or others that take the initiative to build bridges be seated at the negotiating table, and they are shown that there is a common goal: the return of democracy.

The return of democracy

RU: What would you consider to be the liabilities of a democratic transition process in Peru?

JT: Any transition process, especially in Peru's case, involved key issues like justice system reform. It did not progress as quickly as it should have, which was not the case of the electoral system. We rebuilt [the electoral system] in record time. In four months it went from being an institution under the Intelligence Service's control to being under the citizens’ control.

In the judicial case, there was no full commitment to reform and there were too many powers installed in the justice system. Another point was the issue of the fight against corruption. Progress was made in sanctioning a group of actors, but unfortunately the locks were not kept in place to prevent it from happening again.

RU: Have these liabilities kept the door open for an eventual return of Fujimorism?

JT: That's where political system reform comes in. The parties have been rebuilt, but many of them are not transparent and do not reveal their funding sources. A party law was made but the issue of financing was omitted. Evidently, that always carries the danger of turning to silver bullet solutions.

The figure of the caudillo (a leader, a warlord, a strong man) is very present in the DNA of Latin American political history. This makes people feel disaffected and believe that somehow democracy fails to solve their problems.

Iran  3 days ago
Cancel this reply