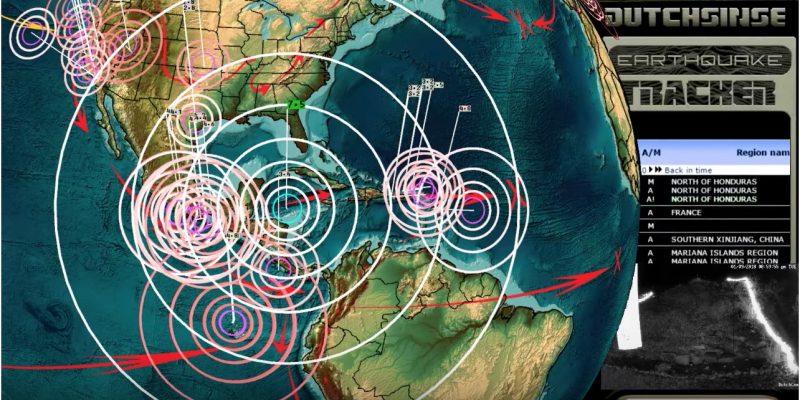 Screenshot of a graphic from a YouTube video, illustrating the areas affected by the M7.6 earthquake that struck parts of the Caribbean and Central America on January 9, 2018.

“Nature has warned us. We need to take heed,” said Jamaican radio talk show host Cliff Hughes on his morning programme less than twelve hours after a magnitude 7.6 undersea earthquake struck off the coast of Honduras on January 9.

For approximately one hour, authorities issued a tsunami warning for Puerto Rico, the U.S. Virgin Islands, the Cayman Islands, Cuba, Jamaica and other Caribbean islands, as well the coasts of Mexico and Central America, but was subsequently lifted.

The magnitude of the quake was stronger than the tremblor that devastated Haiti on January 12, 2010, killing around 200,000 people (which actually produced a tsunami).

News alerts went out from various regional entities on social media, but the earthquake hit at shortly before 10:00 p.m. local time, when many had already gone to bed:

According to the Pacific #Tsunami Warning Center, a 3 foot Tsunami is capable along the coasts of #Honduras, #Belize, #CaymanIslands, Southern #Cuba, and #Jamaica. @newnewspage pic.twitter.com/ml3EuJEay7

A small tsunami was recorded in the Cayman Islands. One Voice of America reporter tweeted continuously on the situation:

Coordinated Universal Time (UTC) is 5 hours ahead of Jamaican Time. Therefore impact is predicted for 11:18pm. Please be pro active in the event predictions are accurate. https://t.co/jUyYkgBIq2

Cliff Hughes, noting that Jamaican media houses lack the capacity for a “24/7″ newsroom, highlighted the usefulness of Twitter in this situation:

That quake late last night was an excellent lesson for our first responders. And especially for us in media. We were simply not prepared to quickly alert the country of the danger. We have work to do becuz it's not if but when. Twitter was very useful.

Many Jamaican residents only heard about the earthquake when awoken by anxious messages from overseas:

Woke at 5 a.m to whatsapp message sent at 1:45 a.m our time from UK about the warning. Internet was down when I went to bed. Su
ppose it was real danger, how would I have been warned?

At least one Jamaican community of Old Harbour Bay does have a pilot tsunami warning in place with some residents evacuating:

Wowowow I just woke up what is this #TsunamiPR THAT I HEAR ????

NOW on #PegaosEnLaMañana: Director of the Seismic Network accepts “out of commission” tsunami warning system and says that fixing it may take months. @Radioislatv

On the Caribbean coast of Belize, anxiety rose as the sea appeared to retreat. The Trinidad and Tobago Weather Centre tweeted:

12:30AM: The Ocean Continues to Recede in San Pedro. Belize as the tsunami threat continues for Belize and Honduras.

Stay away from coastal areas if you reside in Belize or Honduras’ Caribbean coasts!

More images from San Pedro, Belize as the ocean has receded. Stay away from the coast!

Ironically, the earthquake took place on Earthquake Awareness Week in Jamaica and other islands. The disaster management agency in the low-lying Turks and Caicos Islands tweeted:

However, there were concerns raised about regional communications protocols when a tsunami warning is issued. In Haiti, at least, a system is in place:

But in Jamaica, government agencies lacked a strong online presence:

It is so pathetic that social media pages of critical govt.agencies like @NWA_JA and @odpem are not updated on a regular basis – there was NO tsunami warnings on ODPEM's [Office of Disaster Preparedness and Emergency Management] twitter or website also NO updates nor map on NWA [National Works Agency] webpages/twitter of alternate route for Barbican road works

Finding humour and solutions in a serious situation

Despite the scare, there was still time for the usual Caribbean humour. One Puerto Rican tweeted:

After the shock of last night, I woke up carefully checking my family emergency plan in case of a #tsunamiPR. I'm sharing it so that you can prepare and protect your own lives as well as those of your loved ones.

Marvia Lawes, a prominent Jamaican religious figure, tried hard to see the funny side but knew the situation was serious:

[…]Tsunami Warning and Jamaica in the same sentence…and it's suddenly not so funny anymore? […] I want to know, now what? How will these alerts be communicated to the citizenry that's not on Social Media, that lock off dem [their] radio at nights or [are] in other ways disconnected from the late-breaking news? Civil Defense Sirens in every town fi [will] wake up people? This is quite sobering I tell you.

As discussions continue in mainstream and social media, the Office of Disaster Preparedness and Emergency Management (ODPEM), received suggestions to increase their online and social media presence:

We must learn from this experience and work together on improving our disaster preparedness warning/alert systems. Natural disasters are often times unpredictable so vigilance and a proactive approach is always a merit. #EarthquakeAwareness #DisasterPreparedness

In many Caribbean countries with a history of earthquakes, there were indeed lessons to be learned.