While Iran's Former Head of Judiciary Receives Medical Treatment in Germany, Activists Urge his Prosecution for Crimes Against Humanity 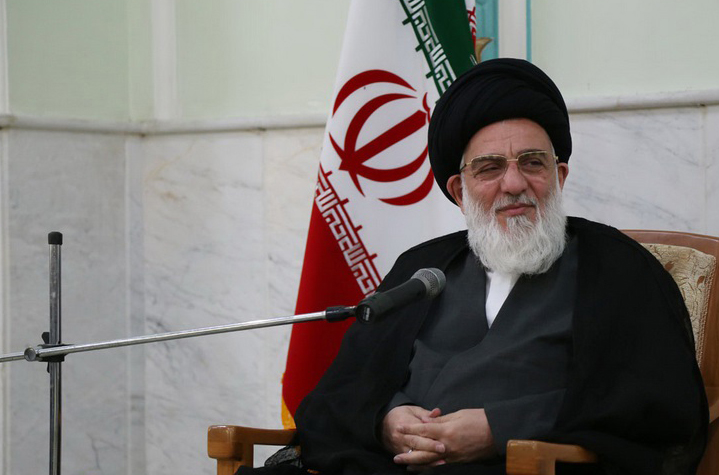 Coinciding with a new wave of arrests and repression within Iran, a coalition of Iranian human rights non-governmental organizations (NGOs) have filed a criminal complaint with the German government accusing Ayatollah Mahmoud Hashemi Shahroudi, a former head of Judiciary in Iran, of crimes against humanity. Shahroudi, a senior clerical figure with influential positions in bodies such as the Assembly of Experts, was receiving medical treatment at the International Neuroscience Institute in Hanover, Germany until January 11.

The coalition includes the Centre for Defenders of Human Rights, the Centre for Human Rights in Iran, Iran Human Rights Documentation Centre, Justice for Iran, the Siamak Pourzand Foundation and other human rights associations. Additional criminal complaints were filed by the National Council of Resistance of Iran, as well as the German Green Party member Volker Beck.

Payam Akhavan, one of the lead international human rights lawyers behind the submission, explains to Global Voices (GV):

That itself is highly valuable in exacting some kind of a cost for human rights abuses.The message has to be that those in power are accountable to the people, that they must rule with justice or face the consequences. Otherwise we will stumble from one dark political space to another.

Akhavan, a renowned international lawyer and professor at Mcgill University in Canada believes that Shahroudi’s record during his tenure as the Head of the Judiciary is sufficient to establish a criminal base for prosecution under international law:

Throughout his tenure as Head of the Judiciary, he presided over the arrest, prosecution, imprisonment, abuse, and execution, of numerous dissidents, whether human rights defenders or journalists or webloggers or political activists or religious minorities, ranging from the student protests in 1999 to the post-election protests in 2009 culminating in the horrible atrocities in Kahrizak and the show trials and other such violations.

If Germany brought a case against Shahroudi, it would require a “universal jurisdiction,” a complex legal theory that gives national courts jurisdiction to “prosecute individuals for serious crimes against international law.” This legal theory also supported the prosecution of Chilean leader Augusto Pinochet as well as individuals on trial for their involvement in Guatemala's genocide.

Akhavan notes a high threshold for providing evidence to obtain a warrant from German authorities under Article 7 of the Rome Statute of the International Criminal Court, requiring proof that the crimes (including murder, rape, and torture) were “committed as part of a widespread or systematic attack directed against any civilian population.”

It may seem obvious to most people that these are the facts, but gathering detailed credible evidence is an enormous resource-intensive undertaking.

Families and activists speak out against Shahroudi's alleged crimes

Shahroudi has gained notoriety both in and out of Iran for his repressive policies during his tenure as the head of Iran's Judiciary from 1999 until 2009, including his involvement in egregious human rights abuses such as upholding the death sentence of Reyhaneh Jabbari, a young Iranian woman sentenced to death for allegedly killing a former intelligence ministry employee who she claimed was attempting to sexually abused her. Amnesty International, an international human rights NGO, noted that Jabbari was sentenced in 1999 after a deeply flawed investigation.

The families of other victims have also spoken out, including the son of Iranian-Canadian photojournalist Zahra Kazemi, who died while in Iranian custody nineteen days after her arrest in Iran.

The push for prosecution comes at a time of widespread protests rocked Iran over the past few weeks and culminated in thousands of arrests and reports of deaths in custody. Despite the wave of repression, dissidents have rallied outside of Evin prison in Tehran, Iran's capital, in a show of solidarity with imprisoned protesters.

As governmental repression continues, Akhavan argues that organized efforts to hold the regime accountable under international law can have a positive impact for dissidents inside the country, strengthening their resolve. Solidarity and support from the Iranian Diaspora and international community send a message that those who appear invincible today can end up a defendant in a courtroom tomorrow.

Akhavan also advocates for accountability of atrocities as an integral part of a democratic movement that prevents history from repeating itself:

“Now is the time to send a signal to the Iranian regime that its officials may be held accountable for their actions.”

Shahroudi leaves Germany behind, but not the allegations

Reuters cited sources claiming that Shahroudi left Germany for Iran midday on Thursday, January 11, after receiving medical treatment, despite urgent requests from Iranian human rights groups to detain him. The federal prosecutor's office in Berlin responded by reiterating its commitment to investigating the complaints. A spokeswoman for the prosecutor's office told Reuters:

We will continue to examine on a legal basis whether Mr. Shahroudi was guilty of crimes against humanity, regardless of where he is staying.

Shahroudi has apparently decided to stop the treatment in Hannover and flee back to Tehran after German federal prosecutor is examining if to investigate him for crimes against humanity. https://t.co/fDSJcpY3Rs pic.twitter.com/6GcoTZmmD5

Update: BILD reporter @j_h_dobers reports heavy presence of federal police at Hamburg airport as Ayatollah Sharoudi is about to flee Germany in a few minutes. Iran Air flight got a second gangway to secure Shahroudi entering the plane. https://t.co/fDSJcpY3Rs pic.twitter.com/F4foeGTXc1

Despite Shahroudi's departure from Germany, the organized effort to hold him accountable sends a powerful message to Iran's regime. Individuals like Shahroudi, with alleged crimes attached to their names, will not be able to travel to Europe and North America without pushback and possible prosecution.