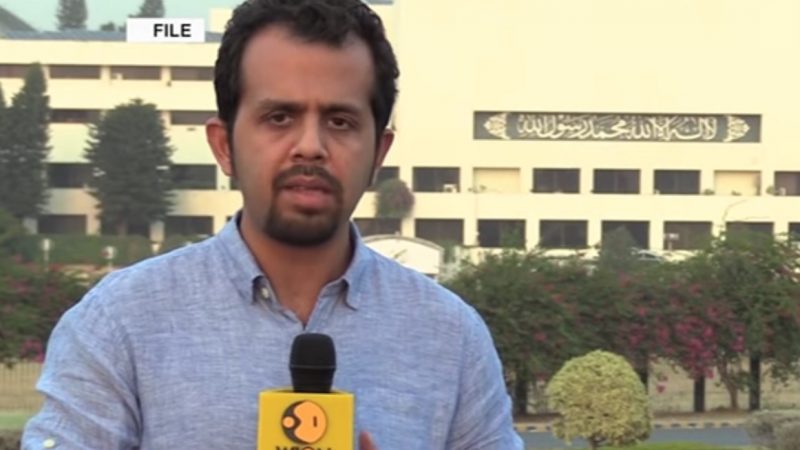 Pakistani journalist Taha Siddiqui [2] was on his way to the airport on January 10 when his taxi was stopped and several gunmen attacked and tried to abduct him [3].

“They were cordoning off the road, armed with rifles, and the men who pulled me out of the car, they had small weapons, pistols”, Siddiqui told Al Jazeera [4].

Siddiqui was traveling to the United Kingdom for a work-related tour. The attackers fled the scene and took with them his laptop, mobile phone, passport and other belongings.

Siddiqui has covered terrorism, persecution of minorities, economic instability, corruption, and civil-military affairs for multiple foreign publications including the Guardian, New York Times, Christian Science Monitor and France24. He was awarded the Albert Londres Award — referred to as the French Pulitzer — in 2014 for his work on “La guerre de la polio [5]” (“The Polio War”) for France 24. He currently serves as the bureau chief for World Is One News (WION [6]).

Shortly after the incident, Siddiqui tweeted from Dawn correspondent Cyril Almeida’s Twitter account as his own phone had been taken by the attackers.

This is Taha Siddiqui (@TahaSSiddiqui [7]) using Cyrils a/c. I was on my way to airport today at 8:20am whn 10-12 armed men stopped my cab & forcibly tried to abduct me. I managed to escape. Safe and with police now. Looking for support in any way possible #StopEnforcedDisappearances [8]

Taha Siddiqui, a Pakistani journalist, was beaten and threatened, and only escaped by running through oncoming traffic. pic.twitter.com/odsasHDa85 [11]

Pakistani journalist Taha Siddiqui describes the moment armed men tried to abduct him. Their car stopped in front of his – and they confronted him. He escaped by running through traffic and hiding in a ditch. He has been a vocal critic of the security establishment… pic.twitter.com/9B5MCtPnTJ [13]

In May last year, Siddiqui filed a formal complaint against the counter-terrorism wing [15] of the civilian Federal Investigation Agency (FIA) after they summoned him and asked him to submit his laptop for forensic tests. On May 24, 2017, the Islamabad high court ordered [16] the FIA to refrain from harassing Siddiqui, yet the summons to appear still stands.

In a December 2017 interview with BBC [17], Siddiqui said that he can “hardly do any serious journalism without talking about the military, which has an extensive footprint in the country beyond its mandate”. The report also quoted the Pakistan Federal Union of Journalists, which mentioned that in more than half a dozen cases, journalists have either been issued threats or physically assaulted with a view to warn rather than kill by state or non-state actors. Siddiqui also is an avid social media user and critic of the military [15].

Siddiqui's experience is not an isolated incident.

In 2017, journalists Rana Tanvir [18], Matiullah Jan [19] and Ahmad Noorani [20] all came under attack by unidentified assailants. Three years earlier, in April 2014, senior journalist Hamid Mir [21], a critic of the military and host of a popular TV show “Capital Talk” on Geo TV, was shot several times by unknown gunmen in Karachi. Mir blamed [22]the Inter-Services Intelligence (ISI) [23] for the attack, and Geo TV repeatedly aired the picture of Zaheerul Islam, the now-former head of ISI. The same year, another prominent liberal journalist Raza Rumi, known for criticizing the Taliban, narrowly escaped death in Lahore [24]. His young driver was killed in the attack.

Umar Cheema [25], an investigative journalist and vocal critic of government practice, was picked up by intelligence agencies in 2010. There was no case filed against him. Cheema informed [26] the Committee to Protect Journalists that he was tortured, humiliated and videotaped nude in comprised positions. He is the only journalist in Pakistan ever to go on record about being tortured in custody.

Pakistan is ranked 139 out of 180 countries as per the World Press Freedom Index 2017 [27] by Reporters Sans Frontieres (RSF) and is one the world's most dangerous countries for reporters.

Journalists and journalists’ unions and civil society organizations have made statements in support of Siddiqui and pushing to end enforced disappearances in the country.

Saeed Shah [28], a Pakistani journalist with the The Wall Street Journal tweeted:

@TahaSSiddiqui [7] is a brave journalist. His crime? Being critical of Pakistan's security establishment and working for an Indian news channel. This is an attack on journalism in Pakistan and in particular those working for the foreign media (Taha also works for France 24). https://t.co/YQya2JxNkb [29]

Very shocked (but not entirely surprised) to hear @TahaSSiddiqui [7], a fearless critic of Pakistan's deep state and its self-destructive policies, was beaten up and narrowly escaped abduction by unknown men this morning. Tragic how Pakistan's best are targeted by its worst.

The Rawalpindi Union of Journalists condemned the attack:

Bilawal Bhutto Zardari [35], chairman of the Pakistan Peoples Party tweeted that the matter of enforced disappearances and attacks on journalists should be addressed in Parliament:

The attempted abduction of @TahaSSiddiqui [7] in Islamabad once again underlines the dangers faced by Pakistan’s journalist community. For such brazen attacks to repeatedly take place in our capital is unacceptable. Will be asking PPPP to take this issue up in parliament.

Amnesty International condemned the attack [37] on Siddiqui and other Pakistani journalists:

Pakistani journalists like Taha Siddiqui have a right to carry out their work freely and without fear. Journalism is not a crime, but attacking journalists is. These crimes must be immediately and effectively investigated. All journalists should be provided the protection they require. And there must be a clear and unequivocal commitment by the Pakistani authorities to end impunity for attacks on journalists.

I m headed to Islamabad Press Club to do presser abt wht happened to me today morning. Pls cover. Registered case at Koral Police Station. Finally reconnected on social media & got new phone. Thank u all for support. I shall not b silenced. Pls reshare #StopEnforcedDisappearances [8]